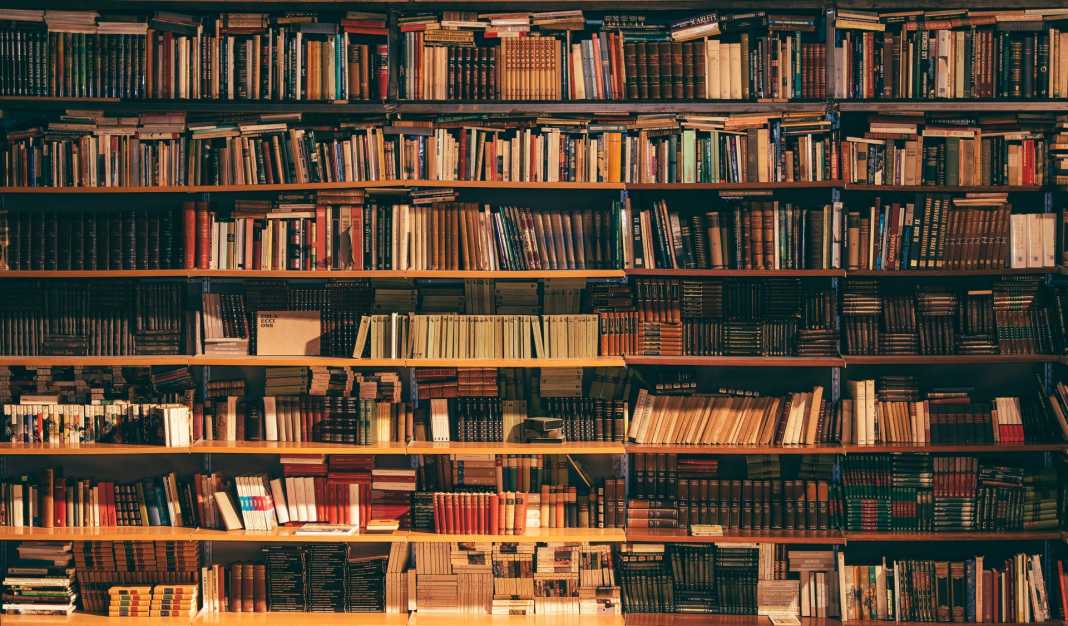 Republican lawmakers in nearly every state in America have proposed legislation aimed at removing critical race theory from classrooms. However, these bills are usually focused on erasing authentic American history and are intended to not make white people “feel bad,” about the legacy of enslavement and systemic injustice in the nation.

The American Civil Liberties Union (ACLU) is just one organization leading the fight to push back against this legislation which aims to literally whitewash American history.

In a statement to BLAC, they note that “the vast majority of book bans that are taking hold across the country — whether through legislative proposals or direct school district or board actions — specifically aim to remove books that are by and about communities of color, LGBTQ people, and other marginalized groups. Censoring books on this basis is discriminatory and antithetical to our First Amendment rights, and the ACLU is actively pursuing litigation and other efforts to block such laws and policies.”

ACLU says that book bans are nothing new.

“Throughout history, certain books have come under fire for content deemed inappropriate or controversial — often, that content is by and about people of color, the LGBTQ community, and other marginalized groups,” the union writes.

It added that a spate of classroom censorship bills aim to erase discussions about race and gender in schools across the country.

They note that these books are being banned and challenged across public schools and libraries at an alarming rate. The union cited that, in 2021, the American Library Association recorded an increase in the number of challenged books to 729, compared to 156 challenges received the year prior.

ACLU has provided a list of 10 books that are currently being banned, quietly removed or targeted by local school boards.

These books have been formally removed or challenged for removal from public schools and libraries.

1. “The Bluest Eye” by Toni Morrison

Published in 1970, “The Bluest Eye” was Nobel and Pulitzer Prize winning author Toni Morrison’s first novel. Its 11-year-old protagonist, Pecola Breedlove, copes with racism and sexual abuse as she comes of age in 1940s Ohio. Despite its status as a seminal work by one of the foremost authors in American history, the book has been a frequent target of bans for content described as “sexually explicit material,” “disturbing language,” and an “underlying socialist-communist agenda.”

“The Bluest Eye” is one of the books at the center of a lawsuit filed by the ACLU of Missouri in February against Wentzville R-IV School District. The school district reversed its decision to ban the book shortly after the lawsuit filing, but litigation continues. Other recent challenges to the book have occurred in Mississippi, where Mayor Gene McGee of Ridgeland attempted to withhold over $100,000 in public funds from the Madison County Library System unless it purged it and other specific books, and in Virginia, where a school board in Virginia Beach removed the book from circulation, only to return it to shelves shortly after due to public outcry.

The children’s book “Heather Has Two Mommies” tells the story of a young girl whose family does not look like those of her classmates. As the daughter of LGBTQ parents, Heather realizes she stands out when she draws a picture of her family for a classroom assignment. For over 30 years, the book has been an important example of LGBTQ+ representation and inclusion for young readers.

Recently, a superintendent at Pennridge School District in Pennsylvania requested its removal from elementary school library shelves for “referencing gender identity,” along with other books addressing LGBTQ+ issues.

In “All Boys Aren’t Blue,” LGBTQ+ activist George M. Johnson writes about growing up Black and queer, including about his experiences being bullied, his first sexual relationships, and other stories throughout his childhood and adolescence in New Jersey and Virginia. The book is currently being targeted for removal by at least 14 states because of its LGBTQ+ themes.

The book is among those involved in the ACLU of Missouri’s lawsuit against Wentzville R-IV School District, filed in February. Other recent challenges occurred in Mississippi, where a mayor attempted to withhold over $100,000 in public funds from Madison County Library System unless it purged books with LGBTQ+ themes, and in Florida, where a member of Flagler County school board filed a report with the sheriff’s office in November 2021, claiming that having the book in school libraries is a crime.

Nonbinary and asexual author Maia Kobabe, who uses e/em/eir pronouns, details eir journey through adolescence and coming into eir self-identity in “Gender Queer,” an autobiographical graphic novel about what it’s like to not fit into traditional norms of gender and sexuality.

Recent challenges have occurred in Texas, where Keller Independent School District removed the book without proper review for what it described as “inappropriate images”; in Florida, where Brevard Public Schools pulled the book from library shelves in October 2021; in Virginia, where it was among books targeted for removal by Virginia Beach City Public School board; and in Illinois, where a group of parents in the Chicago suburb of Downers Grove are demanding the school district ban Gender Queer from high school libraries.

Book bans are nothing new. Throughout history, certain books have come under fire for content deemed inappropriate or controversial — often, that content is by and about people of color, the LGBTQ community, and other marginalized groups. As a spate of classroom censorship bills aim to erase discussions about race and gender in schools across the country, books about the same issues are being banned and challenged across public schools and libraries at an alarming rate. In 2021, the American Library Association recorded 729 book challenges, compared to 156 challenges received the year prior.

The protagonist of the children’s novel “Melissa” is a fourth-grader coming into her own identity as a trans girl in a world that knows her only as “Melissa.” The author, who goes by they/them/their pronouns and identifies as genderqueer, wrote the book due to a longstanding void of voices like theirs in literature. “I wrote it because it was the book I wanted to read,” Gino explained. “I wanted trans voices telling trans stories.”

Since its publication in 2015, “Melissa” has been one of the most-challenged books for conflicting with “traditional family structure.” A recent challenge occurred in Florida, where it was pulled from libraries in Polk County along with 16 other books — many highlighting themes of race and LGBTQ+ issues.

6. “Stamped: Racism, Anti-Racism, and You” by Ibram X. Kendi and Jason Reynolds

Author and historian Ibram X. Kendi partnered with children’s book author Jason Reynolds to write “Stamped: Racism, Anti-Racism, and You” — a National Book Award-winning work on the history of racism in America. But it’s not the standard type of history book, as its authors state in its opening pages.

This is not a history book.

This is a book about the here and now.

A book to help us better understand why we are where we are.

A book about race.

Rather, “Stamped” is a new form of telling history that melds past with present to engage young readers. The book also contains information on how readers can stamp out racism in their daily lives, and why there is hope for an anti-racist future.

According to the American Library Association, “Stamped” was one of the most challenged books of 2020 in schools. More recently, a middle school in Texas tried to remove the book from a reading list (though not library shelves). However, after a group of Black parents protested that removal, the book was returned to the list.

7. “All American Boys” by Jason Reynolds and Brendan Kiely

The young adult novel, “All American Boys” portrays themes of racism and police brutality as seen through the perspectives of its two teenage protagonists: Rashad Butler, who is Black, and Quinn Collins, who is white. In the story, Rashad is assaulted by a police officer who suspects him of stealing from a convenience store, and Quinn witnesses the encounter.

During the wave of Black Lives Matter protests in 2020, the book received an increase in attention and scrutiny. Complaints about the book often cite profanity and messages perceived as anti-police, divisive, or “too sensitive.”

“Lawn Boy” is a semi-autobiographical story about Mike Muñoz, a young Mexican American navigating poverty, sexuality, and self-identity as he comes of age in Washington state. The book has been a target of bans for containing content described as “homoerotic.”

The book is among those involved in the ACLU of Missouri’s lawsuit against Wentzville R-IV School District, filed in February.

The protagonist of “The Hate U Give” is 16-year-old Starr Carter, a student at an affluent prep school who comes from a low-income community. The delicate balance between the two worlds she navigates reaches a tipping point when she witnesses the fatal shooting of her childhood friend, Khalil, at the hands of police, and the ensuing public debate as the news spreads throughout the community.

Despite its popularity, the book has been a target of bans for containing profanity and “anti-police” messages. It has been challenged in schools across the country, including in Texas, where Katy Independent School District banned it in 2017; in Illinois, where it has been banned by ROWVA school district since 2018; and in Pennsylvania, where Dubois Area School District announced in November 2021 that students would need parental consent to read it.

10. “Between the World and Me” by Ta-Nehisi Coates

National Book Award-winning “Between the World and Me” is a semi-autobiographical work about racism in America. The story is told through a letter from the author to his 15-year-old son. Its frank discussions about race have made it controversial in schools and incarceration facilities seeking to ban it.

In October 2021, “Between the World and Me” was included in a list of school library books targeted for investigation by Texas Rep. Matt Krause during the state’s ongoing debate about banning “critical race theory” from classrooms.

The ACLU is actively pursuing litigation to block government action that bans books from library shelves because of disagreement with the viewpoints they express, or disapproval of the life experiences they describe, including many of the books listed above. Recently, the ACLU of Missouri filed a lawsuit suing the Wentzville R-IV School District for banning eight books — including “The Bluest Eye,” “Lawn Boy,” and “All Boys Aren’t Blue” — from school library shelves. After the lawsuit was filed, the school board voted to rescind the ban of “The Bluest Eye.”

Students have the right to receive an inclusive education free from censorship or discrimination, and book bans infringe on that right. As we continue to fight these unconstitutional laws and policies in court, you can also join the fight by pledging to support students’ right to learn and read the books being banned.

For more information on the American Civil Liberties Union visit their website.

Why buying Black should be a lifestyle, not just a hashtag