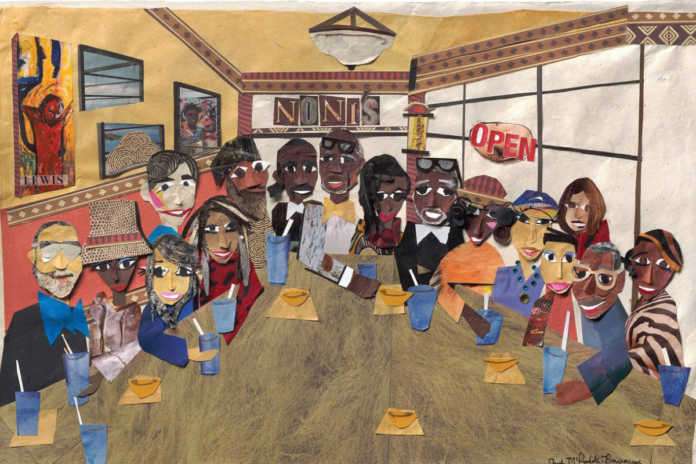 It started as a weekly conversation between two art lovers over pancakes and eggs. Since, the breakfast of two has become a dinner of hundreds. Harold Braggs and Henry Harper founded the Detroit Fine Arts Breakfast Club in 2009. The group meets every Monday at 5 p.m. at Noni’s Sherwood Grille in Detroit. Artists, art collectors and lovers come from citywide and beyond to discuss, sell and collect fine art.

“Art is a business. Art is more than just something on the wall,” Harper says. As the members file in and try to find a seat in the packed Noni’s dining room, artists sign in at the front desk for a chance to showcase their work. The meeting begins with the organizers inviting first-time visitors to introduce themselves. After the ice is broken and announcements about upcoming shows, open calls and gallery openings are made, the show begins.

Artists are allowed to bring up to two pieces and speak for two minutes. During this showcase, it’s not unusual to hear “sold” yelled out from somewhere in the crowd. “A lot of artists find themselves here,” Braggs says. Before the Breakfast Club, there were few places for Detroit artists to showcase their work.

Ambassador Onzie Norman says the club “fills a void.” He adds, “We want everyone to feel welcomed and experience a different kind of energy.” Harper wants members to “look at art in your life differently.” Becoming a member is simple: show up to a meeting and don’t forget to generously tip your waitress.