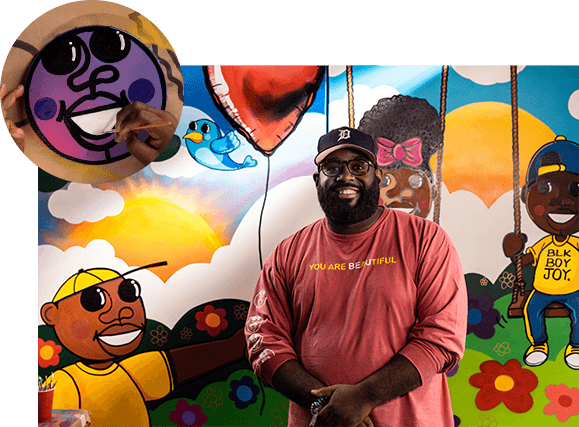 Some may know him as the owner of the cherished home for local artists, the Baltimore Gallery. Others from his beautiful and unique smiles painted all around the city of Detroit – like the Monroe Street Midway Basketball Courts.

Those smiles have found a new home. Rocket Companies has handpicked the Chief Smile Guy, Phil Simpson, to create the new mural on the side of Detroit’s Broderick Tower.

“This piece was created to capture the people that make up the city and visitors as well. I hope that when people see this mural, they see themselves. This captures the diversity and rich cultures of the city.” – Phil Simpson

Where Detroit’s resident humpback whales currently live, Phil Simpson  is bringing his recognizable smiles along with the message that Detroit is home.

“When we heard this property was going to be used as advertising space again, we saw it as a great opportunity to take control of the space and bring more art to downtown Detroit. Such a high-profile location – seen all around the world during Tigers’ home games – needs to be a place to display the work of Detroit artists,” said Casey Hurbis, Chief Marketing Officer of Rock Central – the marketing provider for Rocket Companies. “We hope other Detroit companies and property owners will also explore using their buildings as canvases for local artists.”

This installment is the latest in a history of the Rock Family of Companies bringing murals from Detroit artists to the city’s core. Recently, Phillip Simpson also brought his familiar smiling faces to the basketball courts in the Rocket Mortgage Sports Zone as part of the Monroe Street Midway – along with art from fellow Detroit artist Sheefy McFly. Other prominent murals on Rock Family of Companies buildings include Charles McGee’s mural “Still Searching” on the side of the 28 Grand building, Sydney James’ mural “Out of the Ashes We Will Rise” in the Federal Reserve building garage and Swoon’s “Monica” on the side of the Ally Detroit Center building.

Detroiters can see the new piece, learn more about the design and hear Phillip describe his vision at HomeIsDetroit.com.

Rocket Companies invites art fans to make the trip downtown and take a photo with Detroit’s resident humpback whales, swimming up the east side of Broderick Tower, before the new art installation is unveiled on November 16. The mural is best viewed from the east end of Grand Circus Park or the corner of Madison and Witherell streets.

The new mural will be printed on vinyl that will be attached to the wall. It will not permanently cover the existing whale painting.