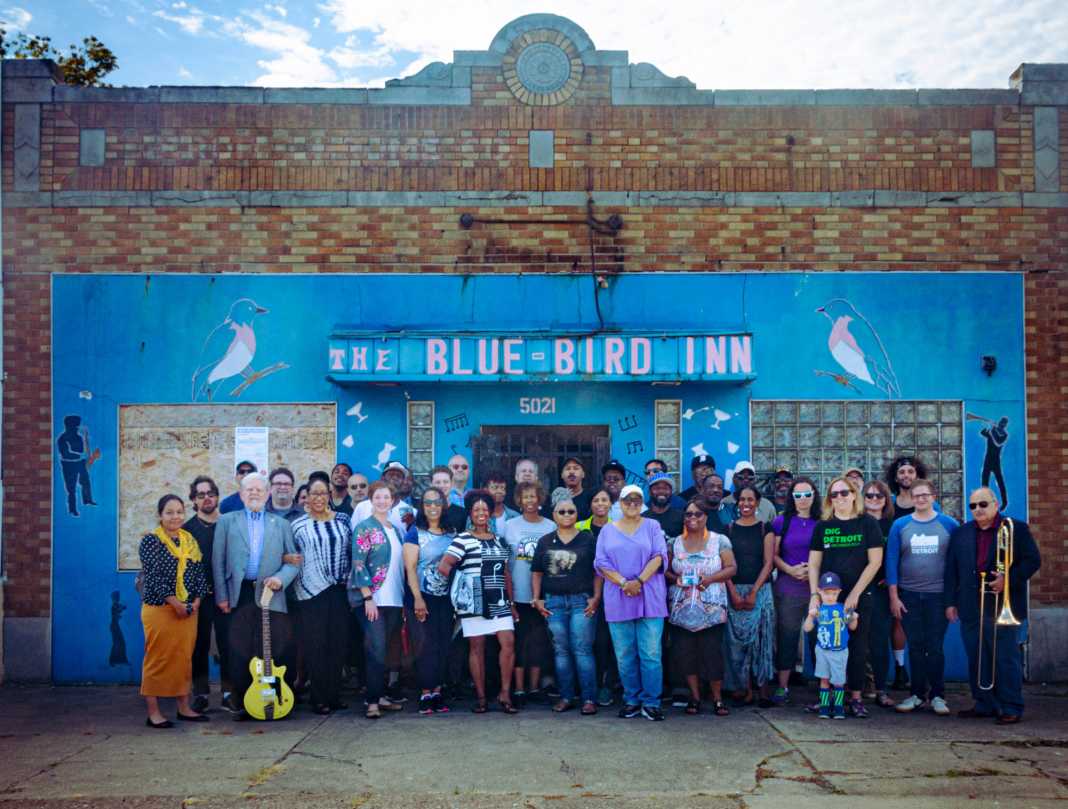 The Detroit Sound Conservancy (DSC) is celebrating their 10th anniversary. In celebration, they are giving us an inside look into their biggest conversation yet: The Blue Bird Inn.

In the 1930s, The Bird was a staple on Detroit’s west side and served as a birthplace of bebop jazz. The neighborhood jazz club served as a hub for black Detroiters during a time when Detroit was majorly segregated. Throughout the ’30s, ’40s and ’50s, The Bird hosted musical acts like Miles Davis, John Coltrane, Betty Carter, Charlie Parker, Alice Coltrane and more! Since then, the iconic jazz club has closed and reopened multiple times.

In 2018, Detroit Sound Conservancy bought The Blue Bird Inn with plans of bringing the club back to its glory along with adding a few more things for the community.

We got a chance to talk with archivist, griot, singer and leader of DSC Michelle “Jahra” McKinney and DSC leader of Operations, Jonah Raduns-Silverstein to get the inside scoop on the project.

BLAC: We read that the plan is to have The Blue Bird act as an operating music venue, a community center, and a showcase of cross genres of music. Can you tell me a little bit about what your plans are when the venue is open and what type of events and things will happen there?

McKinney: We want educational workshops and we would love to partner with local schools. The kids could come after school and learn about being archivist, learn about the musical heritage of the city.

We will have an active place for the community to m  greet and learn and listen to music. We have an open white space room that we can do baby showers, weddings, events, educational — whatever they can imagine.

BLAC: What events have you had at the Blue Bird since you purchased it?

Raduns-Silverstein: So that photo (above) was from after we purchased the building when we had a little lock cutting ceremony, and that was an amazing moment. So, this past summer we did a really nice community barbecue outside the building. Bassist Marion Hayden and Saxophonist De’Sean Jones performed. We received a grant from the neighborhood program through the Detroit regional chamber. We are hoping to have several programming starting in the summer.

BLAC: Why did DSC choose The Bird to conserve? Who is it for?

Raduns-Silverstein: We want that kind of community to feel welcomed, safe and celebrated. We want to uplift. It really is for everybody who lives here, particularly folks who have lived here through it all. I think our project at the Bluebird is the physical representation and manifestation of this work. We’re really hoping to kind of bring in all these elements of music, performance, celebration, music archiving, and community gathering.

BLAC: Why is music conservation important?

McKinney: You know, people don’t realize that their lives are special or that they have anything special to say, or, or they don’t realize what an archive is. Or, it leads to suspicion where they think you’re just trying to steal stuff from them. That’s a real problem.

People don’t realize that their voice is important and, and that their voice is worth being saved and treasured and passed on. This is really talking about an arc of teaching people: a people of people of color — especially that they are precious and that they have to realize their self worth and the worth of their community. And, I think, if you teach children, that it’ll be so much better for the whole nation for everybody.

BLAC: How can the community stay involved?Raduns-Silverstein: We want people to get involved and for a lot of people that means cutting a check. For other people that means volunteering. Other people that just mean kind of tapping into what we are doing. Visit our website, join our newsletter, and follow us on social media. We will be making announcements soon.