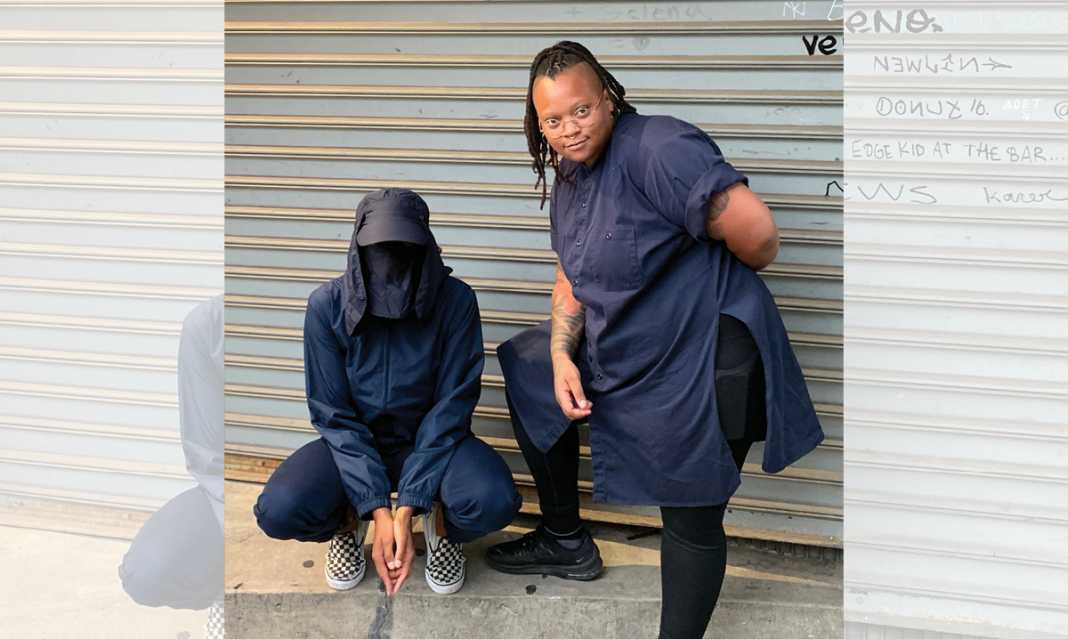 Meet reid good, and please mind both their pronouns and preferred spelling. The lowercase is intentional. They’re an interdisciplinary, nonbinary artist who was born in Flint and is now based in Detroit. Sometimes they’re a fine artist, sometimes they’re a musician, and sometimes they’re one, the other, or both. If it isn’t clear, being defined by any one set of terms isn’t really in the cards for good.

“As cheesy as it sounds to say in 2021, I don’t do labels. My music often reflects the process in my visual art, but not always. I’m a storyteller. Sometimes an idea is best conveyed through another medium, so I switch up how I get the message out,” good says.

good is both classically trained and self-taught in various mediums. They attended University of Michigan and the Cranbrook Academy of Art for their degrees in textiles and communications, and that experience was the spout of inspiration from which their musical exploration emerged. good says their first collection of songs was never intended to be heard and appreciated. It was solely for them to vent about what they were dealing with day to day.

“I live not too far from Downtown, in Indian Villlage. When I had to drive to school, I took Woodward, and that was my journey back, too. I had an entire commute to watch Detroit morph into rich suburbs. The whole spectrum of life, my life in attending those places, was my route to school. That was a moment of meditation and realization for me,” good says.

When their music focuses on their artistic experience, good raps and waxes melodic about their anxieties, both relating to being an art student and not, financial woes and worries, assimilation into new atmospheres, and all the mental and emotional stresses about being a Black, non-binary creative striving to be taken seriously.

There’s lyrical mention of how it feels to experience these things in mostly white spaces, but that isn’t the entire point. More like an inescapable truth. They have a nuanced view on whether or not their work is created with the goal in mind of being “Black”. It is, they say, but it also isn’t.

“A lot of people feel like they have to assimilate to that white cube of creativity to be taken seriously. My visual world was about my own family, my own stories, but I wouldn’t say it’s overtly Black. My work isn’t “Black” because it features Black faces and Black screaming. It’s Black because I created it, and I’m Black, and that’s good enough. It doesn’t have to be dripping with pain. Who’s to say a collection of shapes and expressions isn’t
as Black as a portrait of someone’s grandma?” good says.

Regardless, good says that the inequities and daily irritations they face because of their race, when they occur or speak to the message, are very prominent in their lyrics.

“My music is more inflammatory, for sure. “Woe is me I’m Black” might not be my main focus but ’m still very much pushing back against the typical racism and machinery we face in Detroit. And overall, I want to get it understood that Black people are not a monolith,” good says.

good says they put words to the mundane, like trying to find a parking spot in a crowded lot when you’re late to class, and gives it a satirical, emotional flare that everyone can relate to and maybe laugh at when the frustration passes.

“People appreciate the ability to follow the story. I wear a mask when I perform, I don’t show my face. So in essence, I can be anyone. I’m not braggadocious– this is my everyday life. I drive a 2003 in the winter with no heat and I gotta get to Bloomfield for class. Artists understand the niche parts of it, everyone else living life will get the rest,” they say.

good’s music is good’s life on the track. If you vibe with it, cool. If you don’t, they won’t cry about it. The track names are a mashup of letters that make sense once you hear them, more emotions than titles.

“I’m not a musician that makes for others. I make it to vent, like a journal. It was really never supposed to be for anyone. I was venting in my car. My housemate heard it, and she was like, ‘you have to put this out,” they say.

Looking at a young good, it would’ve been easy to recognize the budding artist as it grew. good credits ther supportive parents and open-minded upbringing for fostering the unique way they interact with their creativity today.

“I grew up in a musical household. There was always music, and I had permission to experiment. I would get keyboards and karaoke mics for Christmas. I was exposed to reality and culture. In school, I was making beats using FruityLoops software and I would sell them. People paid me
to paint characters on their jeans and sneakers. I was the go-to customization kid as early as fourth grade,” good says.

With their fine art, good says they often experiment with sound, motion, graphics and space to create “tangible, thinking art.” They want to destabilize the viewer and their perception of what fine art is, and what it should be allowed to do.

“I favor a lot of experimental and sound-linked stuff with my fine art. The creative object could be a statue of the human body, but it emits sound, it vibrates. As you circle it, it plays a tapestry of experimental tracks and creates an immersive experience. I want people to feel uncomfortable.
I like using sound to bring people out of themselves. I don’t make a lot of pretty artwork that hangs over your couch,” good says.

good says they’re mostly focused on the musical aspects of their creative journey right now. They’re in the process of creating songs for a new collection of work, but they’re also interested in seeing how the input of other artis’s sound and experimental mediums can influence their final product.

The Transformative Power of African-American Artists

The House Where ‘What’s Going On’ Was Born