Picking up oil painting just a few years ago, the artist’s work is emotive, lifelike – and inclusive. 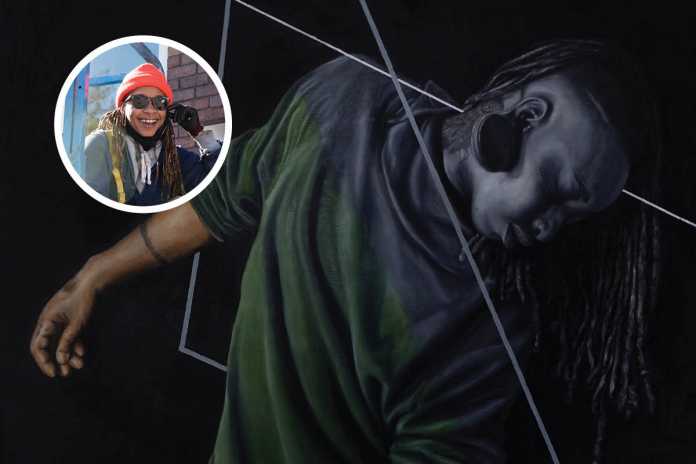 Driving around Detroit, you may have seen the photorealistic murals by artist Bakpak Durden. Durden’s hyper-realistic manner of painting, particularly portraits, has been acclaimed for its lifelike detail – recreations of the human figure charged with mood. The paintings are as lifelike as they are emotive, setting the viewer into an ethereal space of contemplation.

Although Durden has been an illustrator for many years, you may be surprised to learn that they (Durden’s pronouns are “they/them”) are self-taught, after picking up oil painting only a few years ago.

“I learned how much of a process it was, and I loved it,” Durden says. Oil paint is a notoriously difficult medium to work in, but Durden was drawn to the challenge, setting their sights on being able to render as well as Michelangelo or da Vinci. In the pursuit of this style, however, Durden quickly found that they were at odds with painting’s exclusive history.

“I studied the ‘old masters,’ and I realized a lot of that stuff was never taught to people like me, so it was almost a spite thing, and I started learning that way.”

Since then, Durden’s work has been shown in exhibitions at The Schvitz, Cass Cafe, the Museum of Contemporary Art Detroit, the Arab American National Museum and elsewhere, and they’ve worked on mural projects like Detroit’s City Walls and Murals in the Market.

Durden has also continued painting. This summer they created a mural for Quicken Loans and recently showed at the art fair Intersect Chicago with Playground Detroit.