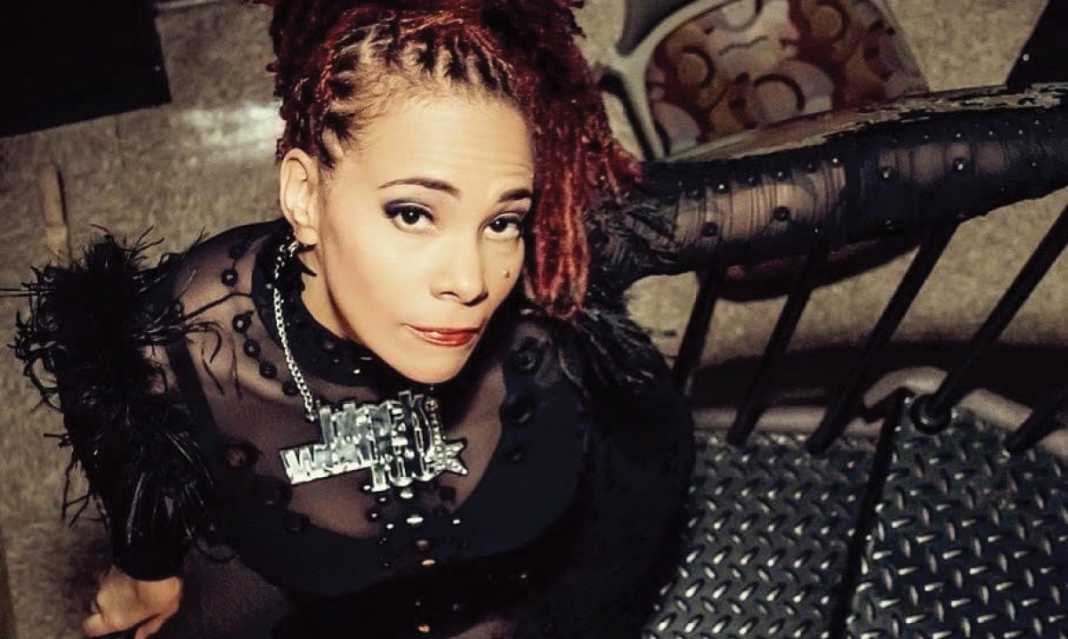 Jessica Care-Moore, an interdisciplinary artist who was born and raised right here in Detroit, made history in 1995 when she was the first artist to win the Showtime at the Apollo showcase five weeks in a row. Growing up, she spent her time daydreaming while staring at the sky, telling stories and being internally and insatiably curious about other people, places and things. When she started high school she found a way to express her creativity and curiosity through art with a Black expression.

With the time she spent in the Joy Road library next to her school, Cody High, she discovered Black period- movement writers and everything about her lifelong interests in the arts and the literary world of culture made sense. Since then, Jessica Care-Moore has evolved into a full time mother, artist, poet, performer, writer, and publisher, as well as the owner of Moore Black Press.

“I used my imagination to create my life. I traveled all over the world on poems that I wrote about people, about my friends, and about my experience,” says Care-Moore.

My dad’s name was Tom Moore, so I called myself a ‘tom girl.’ I grew up in a busy, noisy household full of kids on the Westside. I played basketball and softball my entire life, and I still play them to this day. I actually thought early on I would be a vertertaian. Interestingly, I also used
to have a lot of deja vu growing up. I used to hear the ancestors saying my name– people told me I just had a creative mind.

What inspired you to start Moore Black Press?

I won the Apollo in 1995 and at the time I was the only artist to win 5 weeks in a row. It was a beautiful moment that stuck with me since. Afterwards, I didn’t want to just rush off to become some poet in someone else’s press, a cog in another machine. I started Moore Black Press and I began publishing other poets and my work. I came into the publishing world a very young, rowdy and dope publisher with a dope accomplishment.

What changes have you noticed in the Poetry world since you began performing?

It was more booming in the 90s, but Black poets are keeping it alive in the magical way we keep everything alive. When I won the Apollo and Def poetry jam began to air, poets weren’t given hour-long specials like comedians were and are today. I’m hoping to see more spaces with longer time slots for poets, bigger stages and more attention and acclaim for poets. As an artist you have to make spaces for yourself and those you rep.

Tell us about your upcoming project He Looked Like A Postcard.

It’s also a love story between a poet named Serendipity and a graffiti artist named Motown from the city, and about mothers pushing through the noise of the mainstream bullsh*t of what motherhood looks like, and what being a Black artist in the city looks like.

Black Women Rock will be back in Detroit for 2022 for sure. My newest project Rock and Roll Ni**a is a riff off Patty Smith’s song Rock and Roll Ni**er. I wanted to do my own version, my own rally cry about what it is to be a Rock and Roll ni**a. We created the art form and we don’t get
celebrated, we don’t get radio play. Let’s say how we really feel about it. The songs are very strong because women need more lyricists and poets that sing this way. It’s an expression of how we all feel.

I did a lot of collaboration with artists during the pandemic. When the world stopped, a lot of us didn’t.  What I realized is, artists gon’ art, writers gon’ write, creators gon’ create and lovers are gonna love no matter what.

BLAC Artist of the Week: Artis Lane, Dominating in HER Lane