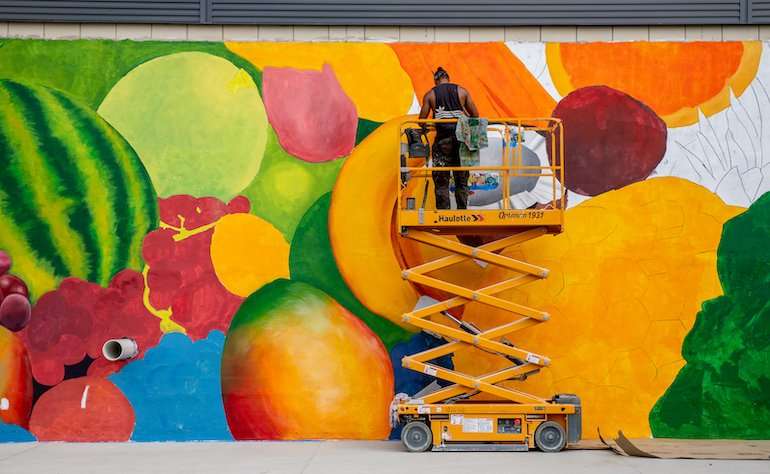 On October 6, Meijer will be opening up the Rivertown Market Detroit, their latest venture in their campaign to create sustainable neighborhood grocery store-style locations. It will serve Lafayette Park neighborhood with fresh and prepared foods and is partnering with local brands such as Great Lakes Coffee and Mudgie’s Deli.

Kelly is responsible for the mural on the Jefferson side of the building. Kelly’s portfolio is full of important historical and cultural figures including Maya Angelou, Huey P. Newton and Aretha Franklin. For Rivertown Market, she painted a portrait of her daughter Isabella wearing pineapple glasses with kaleidoscope lenses, set against a background of produce.

“The kaleidoscope glasses are an often-used symbol in my portraits with glasses. When I first included them in my work nearly 10 years ago, I initially wanted to see how much of the face you could cover and still be able to identify the person. The colors in the glasses also added another component to the theme of identity and creativity,” Kelly says.

Kelley says that including her daughter in this mural is a tribute to her community and a gift to the future generations all in one.

“Our story always continues! I paint historical figures to highlight and create them in a more relatable way in modern day. This mural was meant to relate even more to the neighborhood, the community and just be fun. I’m a product of the community and just was a natural decision to have Isabella be part of it,” she said.

The other mural, painted on the Larned side, was done by Cameron Jenkins. Jenkins’ mural is a bright and vibrant collection of tropical fruits, inspired by his recent travels to warmer lands.

“For the Rivertown mural I had just got back from Tampa the week I found out I was the chosen artist for the market. After spending weeks on the beach I decided to bring the tropical fruit aesthetic to the market since it was fresh in my mind,” Jenkins says.

Jenkins says this mural was a big departure from the tone of his usual work, which typically involves human subjects and deep use of shadow. But he says he’s used to changes in his art process as he takes inspiration from a wide variety of sources and has developed a versatile creative process.

For this mural, Jenkins focused on fine detail and rich texture for his images.

“What was different about this one was that the majority of this mural was done by hand and brush. I really wanted to have a lot of detail in this one, so I held back on a lot of the spray paint,” said Jenkins.

Rivertown Market is located at 1475 East Jefferson. When and if you come to visit,be sure to take a moment to appreciate the beautiful murals adorning it.

The Detroit Couple That Transformed Palmer Woods with Music