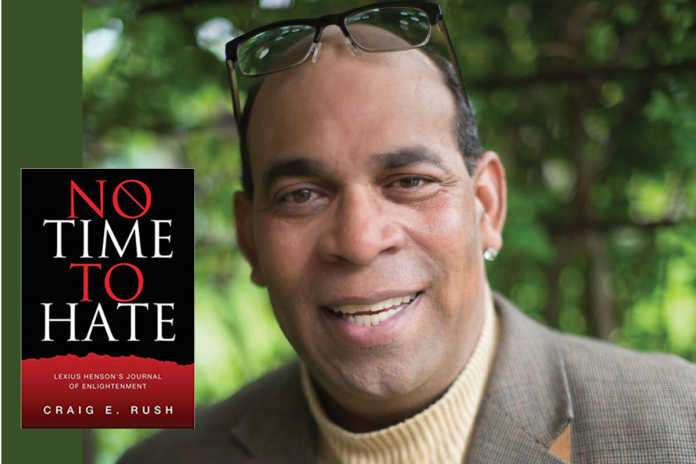 Author Craig E. Rush says there’s one good thing Donald Trump has done for America, although he won’t call him “President.” He says, “He’s split America right down the middle in some ways and shown us where we stand with big portions of the country, and in a lot of ways that’s a good thing. That’s the first step to knowing what we have to do.”

Rush is a Detroit transplant from Cleveland. He’s had “a very interesting life” that includes an education at The Ohio State University and careers in aviation and entertainment. He says he was inspired to write his new book, No Time to Hate: Lexius Henson’s Journal of Enlightenment, out of curiosity about his own lineage and his irritation at the watered-down black history that the school system feeds us.

“My mother didn’t know her heritage, and it left her with a hole in her soul. Our history is so distorted and slavery focused, and it’s done for a reason – so we stay discouraged. We have so much history that has nothing to do with slavery,” Rush says.

Using newspaper archives and the expensive magic of Ancenstry.com, Rush pieced together the remarkable story of his great-great-grandfather. Lexius Henson Sr. was one of the most successful restaurateurs during the Civil War. He served high-class meals on fine china and monogrammed napkins for generals and famous figures.

“It was enlightening to learn that I was descended from a black man that did all those things in the South, at that time,” Rush says. “I titled my book No Time to Hate, because black people have never had time. We were too busy struggling to succeed. Now we really don’t have the time to let hate blind us.”

No Time to Hate is available at all online booksellers and from craigrush.us.