Subscribe
Home Arts + Culture On the Couch: Insecure Recap – “Communication Is Everything” 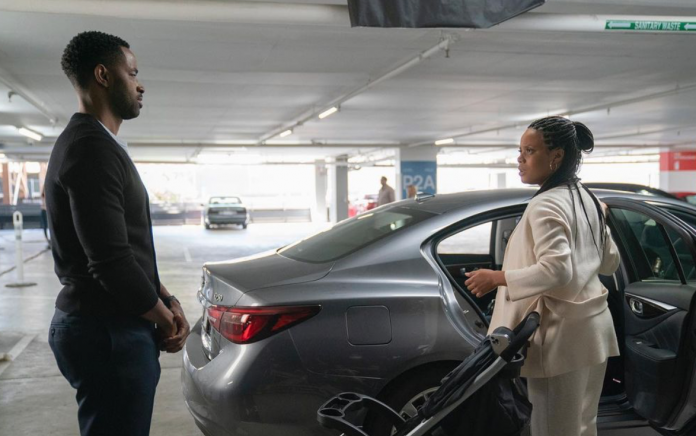 On to the foolery: I have been saying yelling “ACCOUNTABILITY” at the top of my lungs for quite some time now. Please do not come here looking for a “Condola decided to keep the baby on her own, she should be on her own” post. Last I checked, it took two people to lay down and make that baby. This episode wasn’t about who was right or wrong. It was about understanding the struggle AND the effort, learning a new normal. I just wanted them to get on the same page about something, anything, bare minimum the name. Are we going to call him Eli or Jah? Then, there is that side by side of their vastly different lifestyles; there are no words for that, only faces.

Condola told Lawrence “I’m not expecting anything from you… you can be as involved as you want,” and he appeared cool with minimal involvement until he saw Elijah. Lawrence, sir, were you planning to just be a fuck boy and not take care of your child until you saw him??? Where was the conversation regarding expectations between finding out she was pregnant and delivery? He had an attire conversation with Chad that he should have had with Condola… men.

COMMUNICATION! Can he get a copy of what you have planned out so he can know how to move and fit in? How did you decide to wait on introducing solid foods but didn’t tell the father? It appears he was at the same visit and heard the same information. How do you just give your kid food off some random ass table? AND then you couldn’t even hear the advice being given, “This shit ain’t about you, it’s about that baby and what’s best for him.”

SIDE NOTE: Did anybody else cringe every time Lawrence walked in and just grabbed the baby? Like, you not gone wash your hands first???

As a mother who had their first child come earlier than expected, I understood the “I DON’T TRUST YOU!” As a therapist, I understand that statement was about more than the baby. Condola at one time trusted Lawrence with her heart and we see how well that worked out. We also know children are considered our external heartbeats and he just thought he would fly in and take that baby somewhere. OVERNIGHT (Soulja Boy voice)???

Alright, that’s it for this week’s episode. See you next week!