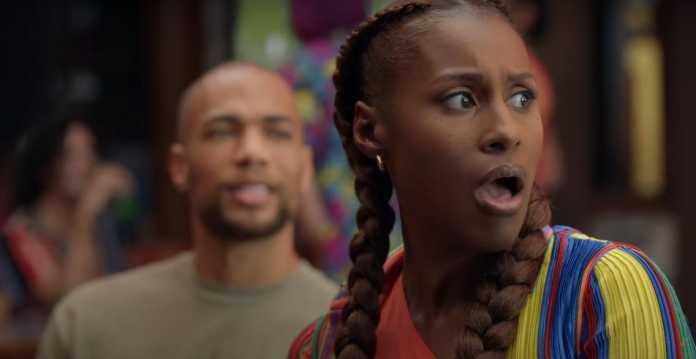 Frolic with me through this episode, the weather is nice it’s either 74 or 81. Bring your own sunscreen, all they got is regular ass Aveeno. OH! “Girl, it’s niggas in bulk out here. It’s like Costco.”

This episode just had too many great one liners:

But… Issa and Nathan. You Ready, you ready for this?

Three words: I”M OVER THEM.

It’s getting hella awkward… like middle school crush where you pass notes back and forth. Let me start off by saying – Nathan is extra dry. Clinically speaking – he is guarded AF. A defense mechanism used to protect one’s own feelings; he was also deflecting with “She’s all over the place.”

Aric’s only comment in the car that actually made sense:

“There must be a reason she feels comfortable crying on you.” MESSAGE!

Issa and Nathan have been consistently inconsistent in each other’s life. Something some of us aren’t strangers, too.

Given both of their pasts, it’s hard to be vulnerable with someone who has shown they have no problem leaving you. No judgement on the reason why, facts are just facts. I’m picking up, half the time Nathan is still trying to process his own thoughts and feelings. And to be expected to hold space for someone else -may be a bit too much for him.

How many of you are in a relationship right now and feel this way?

Don’t be shy, come have a seat on the couch and let’s talk about it.

Don’t take the tension and awkwardness as a sign to run away but instead a sign that you need to embrace your partner and have the same compassion for them that you want for yourself. Also, as Nathan mentioned, set clear expectations for each other and the relationship. Issa’s raw moment of “I’m afraid to have hope” let Nathan know so much without saying much and then she drove home her point with “I want to be more than friends.”

People don’t know how you feel until you tell them, anything else is mere speculation.

Let’s normalize being direct and intentional when telling people how we feel and what we expect them to do with that information.

PAUSE: This Kelli and Resha conversation in was just….“Is my ? a ghost?” I’m speechless.

Velma is Team Too Much, yes? Yes! Ma’am that is not how you be the scape goat for your husband… she should have just kept that standoffish attitude.

Thomas ain’t shit! There, I said it. It needed to be said. On a more serious note, it kinda seemed like he doesn’t know the full story but that introduction to them just doesn’t make them look good. I hope he and Nathan have a chance to talk things out; you know after Nathan has had a chance to process his hurt. More often than not people don’t know how to talk about their mental illness for fear they won’t have support from their loved ones. My hope is that we can all find at least one person that we can let in when we are not doing well.

If you can’t think of a friend or family member, there is always a therapist available.

That’s it for now!

The Six Books All ‘White Allies’ Should Read

32 books with Michigan ties to check out this season

Celebrating a Century of History