Subscribe
Home Arts + Culture Peek Inside the Boys & Girls Club of Southeastern Michigan with Its... 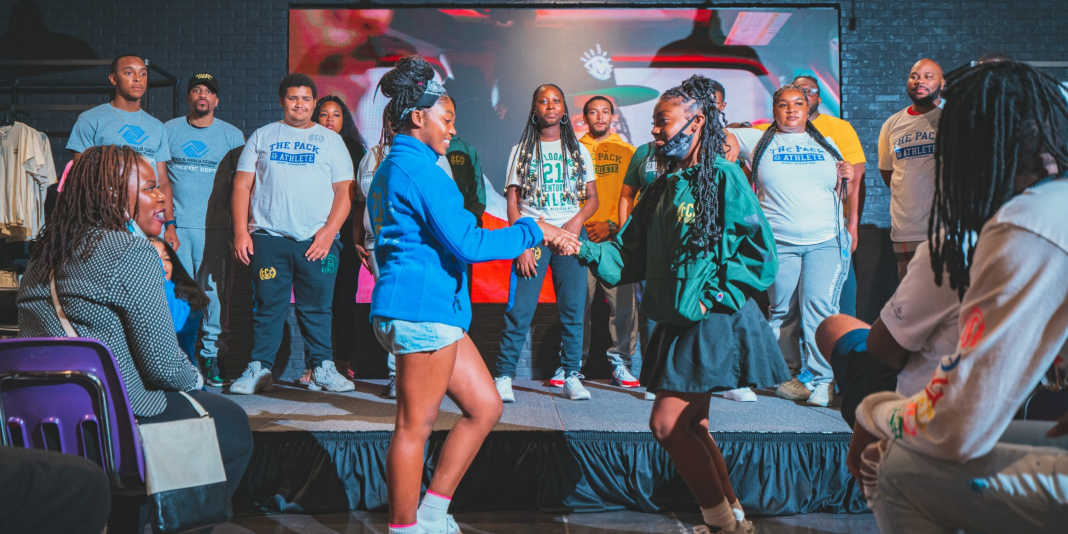 Recording a song at Big Sean Studios inside the Lloyd H. Diehl campus of the Boys & Girls Club of Southeastern Michigan (BGCSM) is just one of the many daily choices for a young aspiring artist. With the Sean Anderson Foundation’s initial investment in the Dick & Sandy Dauch campus of BGCSM two years ago, kids are already in a startup mentality: launching their own dreams and careers in production, filmmaking, music and so much more with elite equipment and resources driving them into limitless possibilities.

Making your way further through the Dauch building, you may see other kids in dance lessons from an official Detroit Piston dancer. Chemistry labs, led by two women chemists, are an active element of the Fauver Martin Club. It’s also where the scientists, along with the help of the youth, created The Lab Drawer™, a cross-functional learning experience for children ages 10–14.

Across the hall, emerging fashion designers are meticulously sketching, sewing, and bringing their visions to full form in partnership with New York designers for an upcoming shoe release. Fashion is the focus of just one of BGCSM’s five industry clubs allowing the youth to hone their craft. In a showcase that spotlights each club, audience members learn the true sense of the five industry clubs: fashion, esports, entertainment, data science, and risk management.

In five years, BGCSM will celebrate its 100th founding year. Throughout its nine decades of establishment, it has transformed, uplifted and motivated countless lives. For many of its youth, it’s a second home and safe space to blossom into young adulthood with unmatched advocacy and support every step of the way.

BGCSM currently serves 21,000 youth, families and entrepreneurs across 11 campuses. For the last several years, their multidimensional Reimagine BGCSM effort turned their clubs into world-class spaces primed for the youth’s advancement into vibrant futures. With over 125,000 sq ft of programming space on 12 acres of land and 250,000 youth living within a 5-mile radius of its clubs, BGCSM drives both youth and community development in neighborhoods across Southeastern Michigan.

MEET THE NEW BOARD MEMBERS

Risk architect Joe Haney, one of BGCSM’s newest board members, is eager to serve and implement new pathways for the youth involved in the Risk Management Industry Club. Having already begun work with interns, Haney is motivated to expose more children to new realms of risk architecture — a subject unfamiliar to many.

When asked what he believes all children need to conquer their dreams, Haney reflects on his own pathway to success across entrepreneurship and business as president of Sterling Insurance Group.

“Children must learn to become calculated risk-takers with drive, perseverance, and thorough education,” Haney said. “I get up and go. They must have perseverance and drive to get through.”

Throughout each campus, coworking spaces, sponsored by Ponyride, are dedicated to small business owners where entrepreneurs can run operations in direct contact with the youth. It sets a profound stage for the focus of BGCSM which prides itself on the adage, “Whatever it takes to build great futures.”

BGCSM’s CEO and President Shawn H. Wilson enthusiastically guided the region’s six new board members, across several southeastern campuses including a stop at the exhibit “Detroit is the New Black” where curated clothing by young designers is currently featured.

At each stop of the tour, Wilson reiterated the adage #ReimagineBGCSM, the hashtag now traveling widespread through the minds of the youth, families, executive board and all those rooting for the progression of BGCSM. With projects and developments continuing throughout Southeastern Michigan campuses, those that have already been initiated are already creating impact.

Alongside Wilson, Board Chair Jennifer DeMello-Johnson expressed her gratitude for each new board member who she said contributes profoundly to BGCSM’s unwavering approach to diversification. With Hawaiian origins, Demello-Johnson has served in several roles throughout her decade-long dedication to BGCSM.

“The beauty of it is I’ve been able to see the vast richness of this organization,” Demello-Johnson shared.

Acknowledging the accomplishments of each board member, Demello-Johnson acclaimed the board’s inspiring history-makers like Wayne County Commissioner Alisha Bell, who was first elected in 2002 as the youngest African American woman to serve on the commission in the country. She also mentioned David Jacob, partner at the law firm Honigman, who has been named as one of the best lawyers in America for nine consecutive years.

For an aspiring singer who was in the midst of a session as the board members entered the Sean Anderson Studio, the Diehl campus is where she is granted the time and creative freedom to develop her passion for singing. Her remarkable voice floored the members who heard just a glimpse of her talent.

Around the corner, a few guys took turns weight lifting and letting off some steam for the day inside of the Planet Fitness-sponsored gym on site.

She asked one gentleman, “What would you be doing if you were not here?” Peterson-Mayberry asked.

“At home, not doing much,” the young man responded.

As one who addresses Detroit’s youth education and life direction, Peterson-Mayberry gleaned with pride as she spoke with several children on the tour.

“This is what it is all about. Empowering these children to see more for themselves. Kids need to see excellence, especially when some are accustomed to feelings of inferiority,” she tells her fellow board members .

Nods of affirmation from the board showed their united front.

On a given day, you may find Sen. Sylvia Santana with the kids inside the Dauch club or another nearby campus. Before joining the board, Sen. Santana has represented District 3 since 2018. She’s intentionally present within the district while raising her family in the nearby neighborhood. Maintaining as much face-to-face relationships with her constituents and the District 3 youth, Sen. Santana aims to instill in all children what she and her husband impart to their own children.

“While the first teaching should happen at home, safe spaces like BGCSM are where we follow through for our children,” Sen. Santana explained.

Recently launching her re-election campaign for the newly drawn 2nd Senate District, the senator aims to help teens establish self-reliance and self-governance as early as possible.

“I believe it is imperative that we teach our youth how to build their own table,” she said.

Tosha Tabron echoes Sen. Santana’s sentiment on the power of youth independence. As Social Investment Officer at the Kresge Foundation, early childhood education is one of the focal points of Tabron’s work. She finds opportunities for investments for Detroit and across the nation. She also works in nonprofit capacity building, equitable community development, and arts and culture.

“BGCSM is doing an amazing job of cultivating this culture of entrepreneurship,” Tabron said.

As a mother of growing boys, Tabron mentioned how having rapid and full schedules as a family can be a balancing act. She notes her incessant support for programs like BGCSM that grant kids a chance to explore and build a future. For Tabron, children must have room to challenge themselves.

Mental health will also take the main stage in BGCSM. Along with the physical reimagining taking place at each campus is the arising psychological and emotional movement. Much of the leadership in mental health will fall on Steve Huprich, Ph.D., one of the new board members.

Huprich of the University of Detroit Mercy is also an adjunct professor of psychiatry and behavioral sciences at Michigan State University’s College of Human Medicine. With more than 100 peer-reviewed articles published; and six, authored and edited textbooks — Huprich is eager to get involved with BGCSM from the moment Board Chair Demello-Johnson invited him into the conversation.

“To see an organization take the initiative is so very important,” Huprich said. “We are training psychologists to meet the needs of underserved communities. I’ve seen an upheaval of effects, even in the life of my own child during the pandemic, especially.”

Through the planned barrier-free access to on-site psychologists from local partnerships, Huprich is hopeful to level the playing field for more children and families. Huprich’s goal as a contributing board member is to help the youth grow familiar with their identity.

“The Ph.D. students and psychology professionals who we call on will help children and teens begin to understand what they need to know about themselves,” Huprich explained.

As is everyone who represents the BGCSM team, Demello-Johnson is keen on paying it forward as she received exceptional opportunities from those passing the torch throughout her journey.

What she discovered, thus far, with this year’s incoming board members is confidence in moving the needle forward for true stability and engagement amongst one another. #ReimagineBGCSM is becoming more evident throughout each site.

More profoundly, the mission reverberates as you hear the voices and look upon the faces of the youth whose lives are expanding through each new experience at BGCSM.

BGCSM remains true to its central ethos: “Whatever it takes to build great futures.”

The Reimaging of BGCSM is not only eliminating barriers that once existed for the organization, but also expanding horizons for all people to see where boys become men and girls become women who are healthy, self-sufficient, well-rounded and well-equipped to lead balanced and fulfilled lives.

ABOUT US
BLAC® is the premier lifestyle magazine for African Americans in and around Detroit. We cover the people, places and issues of importance to our community.
Contact us: edi[email protected]
FOLLOW US
© Copyright 2021 BLAC® Inc. All rights reserved.
MORE STORIES

UPDATE: David Alan Grier will not be the first Black Colonel...

Boyz II Men visits Detroit for a good cause

Why buying Black should be a lifestyle, not just a hashtag