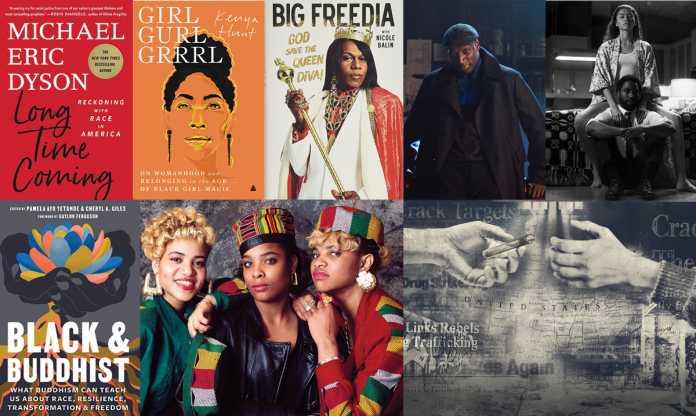 In this accountability letter to America, the award-winning professor and Detroit native Dyson considers George Floyd’s public killing and the nationwide protests and social unrest that followed (St. Martin’s Press). In five chapters – each addressed to a Black martyr – he traces the genealogy of anti-Blackness in America from the slave ships to that Minneapolis street corner.

Girl Gurl Grrrl: On Womanhood and Belonging in the Age of Black Girl Magic by Kenya Hunt

In the vein of Issa Rae’s The Misadventures of Awkward Black Girl, this collection of essays by London-based journalist Hunt reflects what it is to live and thrive as a Black girl (Amistad). She uses the popular and the personal, the humorous and the heartbreaking, to spotlight that despite the increased visibility and representation, and celebration of “Black girl magic,” everyday life for Black women remains complex and conflicted.

Black and Buddhist: What Buddhism Can Teach Us About Race, Resilience, Transformation & Freedom by Cheryl A. Giles

In this collection of writings, African American Buddhist teachers offer lessons on racism, spiritual freedom and a truly representative American Buddhism (Shambhala). Representing all the major Buddhist traditions, the contributors tell of how race and Buddhist practice have intersected in their lives.

Big Freedia: God Save the Queen Diva! By Big Freedia and Nicole Balin

In this memoir from the “undisputed ambassador” of the New Orleans-bred Bounce music movement, Big Freedia pulls us into the relationship between her career and her personal life (Gallery Books). Being “a twerking sissy” was her salvation, helping her to cope with the battles she faced growing up in the worst neighborhood in New Orleans, from losing loved ones to violence and drugs, to surviving Hurricane Katrina by spending two days on a roof.

Actor Omar Sy stars as master thief Assane Diop in this French series created by George Kay in collaboration with François Uzan (Netflix). Part I of the project follows Assane as he crafts a plan to steal a necklace from the Louvre while he plots revenge on a man who accused his father of a crime he didn’t commit, inspired by the French story of thief Arsène Lupin. Release date: Jan 8

This documentary takes us back to the ’80s and the drug that ravaged Black communities across America (Netflix). The film chronicles the stark contrast between the attitudes and policies around the trafficking and abuse of cocaine – the drug of choice for the white and wealthy – and crack, its cheap, highly addictive alternative. War on drugs or war on victims? Release date: Jan. 11

Queen Latifah co-produces this long-awaited biopic exploring the rise of the iconic hip-hop group (Lifetime). The three-hour miniseries chronicles everything from their late-’80s hit “Push It” to how the ladies navigated sexism in the male-dominated music industry, followed by a sit-down interview with the artists. Release date: Jan. 23

Zendaya and John David Washington star as a couple in this black and white rom-dram by Sam Levinson filmed during the pandemic (Netflix). After returning home from a movie premier, a filmmaker and his girlfriend discuss past relationships. Release date: Feb. 5