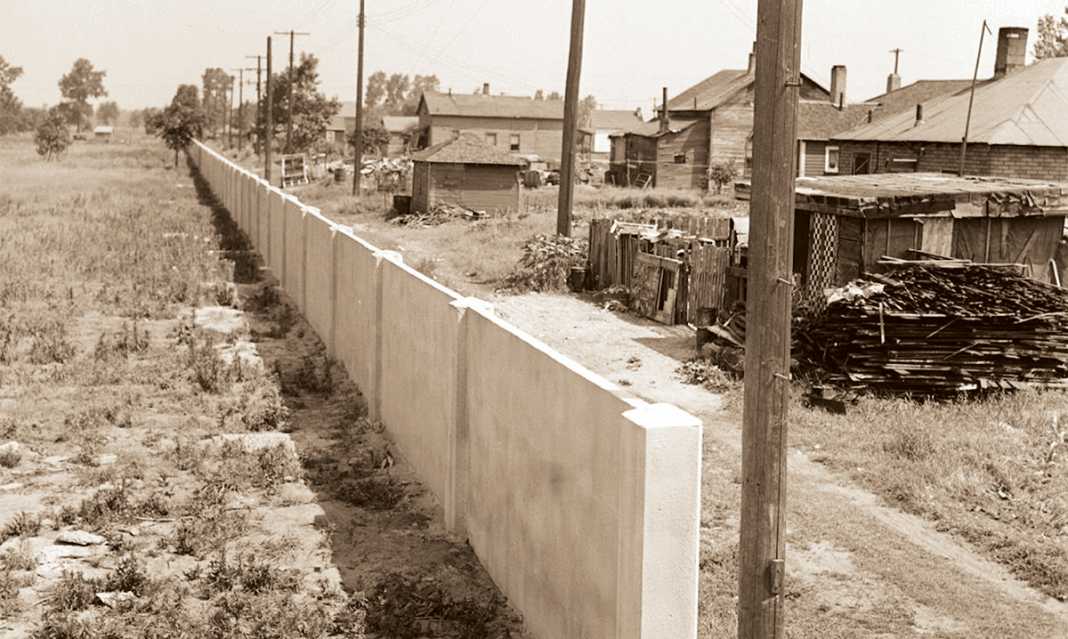 In 1941 the Birwood Wall was built in Detroit. The purpose of that wall, which was built by white Detroiters, was to keep the Black neighborhoods separate from the white neighborhoods. So segregation. But the wall was also built because it was hard to sell those nice homes to nice white families if Black folks were living as neighbors, because nice white families didn’t want Black folks as neighbors. So economics.

The Wall is a story that came about when I let my mind wander and I started to think about ‘what if…?’ As in, what if the Birwood wall had been built around the entire city of Detroit? And what if the Black people inside over time started to tell themselves that they had been the ones to build the wall, and then began to rewrite their own history to make their plight easier to swallow?

Science fiction, fantasy, horror, and alternative fiction almost uniformly spring from the question created by those two little words; what if? Detroit Stories Quarterly (DSQ), which first began publishing in 2018, was created to explore alternative ideas and visions of Detroit not tethered exclusively to reality. It was the question of ‘What if?’ that launched our magazine, and that keeps it going to this day. Because sometimes the best way to see what’s right in front of you is to view your world through another lens.

Here. Try these on.

“You think Granma’s crazy when she says that, don’t you? Don’t lie. I can see it all in your face, the way it’s screwed up tight like a rat. So if you’re gonna say it, just go ahead and say it, Marlon. Won’t change a thing, ‘cause truth don’t change. But you gonna believe what you gonna believe, no matter.”

I could feel my stomach starting to squeeze, just like it always did whenever my grandmother and I had this conversation. Which is why I wished she would  drop it because we both knew she didn’t have much time left, and I didn’t want us spending our last days, weeks or months together arguing about whether or not there was some long lost race of white people on the other side of the wall.

I don’t even care, to be honest. But Granma swears it’s the truth, and that she saw them – lots of them – when she was a kid growing up in pre-dawn Detroit before the wall got built. She even says that it was the white people who built the wall, not us. But that didn’t make sense, because…how? The last recorded sighting of a white person in Michigan was in 2245 way up north somewhere, and that may have been the last white sighting anywhere in the country. We were in touch with other walled communities, and none of them had any evidence of white people appearing anywhere after 2245.

Granma was old for sure (one hundred years old and eight months to be exact, and she was tiny and reminded me of an almond) but I knew that the wall had been around for way longer than that. According to the municipal history ledgers the wall has been here for close to 500 years, and was built by the original Detroiters in 2350 to protect against ‘encroaching environmental dangers’ is what it says. Even if white people had wanted to build a wall and there had been enough of them around at the time, they simply wouldn’t have had the technology or even the energy to pull something like that off. Not if the ledgers were correct about the bare survival condition they were in during the last hundred years or so of their existence. And since the founding historians were my ancestors on my mother’s side (Granma was on Dad’s side) then I preferred to take it as gospel.

Granma did not take it as gospel. Not even close.

“Y’all need to know we ain’t the only ones here! You think it’s always been like this because this is all you’ve ever known. But I am telling you there are white
people out there, and I am also telling you this damned wall ain’t as old as everybody says! It’s those implants got your heads all screwed up. I swear I don’t know why you let the Council get away with that.”

We were sitting outside in the common area on a small cushioned bench beneath a large red umbrella behind the senior facility where she had been staying for the past couple years. There were several tall trees, and the grass was a lush, dark green and was always cut close. Multi-colored arrangements of all sorts of sweet-smelling flowers were scattered about the yard in a random design, and there was even a bubbling brook that meandered its way through the postcard beauty. The sky looked almost too blue, as if it had been imagined.

Trail Winds was the most expensive senior home in the state, and it showed. Nevertheless, I felt guilty nearly every day for having had to put the woman who raised me into this facility, even if I didn’t have a choice. And hearing her rants about the return of white people didn’t make me feel any better.

Not only did Granma insist that there were white people on the other side of the wall, she also said that the final recorded sighting is a false record.
But as old as she is means you can’t always believe what she says, or at least that’s what I tell myself.
After all, she was one of those who chose not to get the implant once they were made available. Unlike those of us who either chose the implant or were
implanted at birth (the implants were offered voluntarily by the Council not forced on us like Granma seems to think), her memories  would sometimes get infected and cloudy. That meant there was no way for her to check her memories for one hundred percent accuracy like the rest of us.

Which is why most citizens from Granma’s generation chose the implants. She was one of a bare handful who resisted. Everyone else was excited to get them because not only would you develop perfect recall with exact detail, you would also experience overall wellbeing 24-7. Who wouldn’t want that?

Folks who didn’t trust feeling good all the time like my grandmother, that’s who.

Those from my generation were all given the implant at birth so we didn’t  have anything to compare it to. But we had nothing to complain about either because we always felt content – for the most part.

Anyway, there are no records anywhere that give credence to what Granma says about there being white people still in existence outside the wall. The city has been sending out exploratory crews twice a year for as long as I have been alive, which is 34 years, and not once have they ever some back with evidence of any form of life beyond the wall aside from some weird-looking plants and animals that never seem to last more than a few days once brought inside the wall.

But she’s also my grandmother, so what the hell am I supposed to say?

“I never said you were crazy, Granma. And that’s because I’m not crazy. You and I both know if I was fool enough to call you crazy you would hop out that bed like you were 50 years younger and beat my ass like a rented stepchild.”

I was trying to make her laugh, and normally that line would have worked. But instead, her eyes flashed as if there was lightning inside as she reached over to grab my forearm and squeeze harder than any century-old woman should have been able to do.

“When was the last time you could think for yourself?”

“Because you don’t even know. Think about that. I’m the last surviving citizen didn’t take that implant. The last one who had a choice. Every single member of your generation got that damned implant at birth. And where are those implants made, huh? Who makes them?”

“It doesn’t really matter, does it? They were approved by the Council, and the Council would never approve of anything that would hurt us. You know that. You used to be a member of the Council!”

“Yes I did, baby. And then they kicked me off.
And do you want to know why?”

I really didn’t, but I knew I didn’t have a choice. Might as well play along.

“For asking that same question. And because when no one would tell me, I  found out for myself. I found out by sneaking outside the wall.”

I could feel my heart starting to race.

“But you can’t do that, Granma,” I said, my voice sounding weak. “It’s not safe! We need to stay inside…”

“For our own protection? That’s what I thought
too, Marlon. Even though I didn’t have the implant, I still believed what they told me. Until I saw the city on the other side of that wall. Where the implants are made. ‘You’re a brave one,’ is what they said. ‘The first to see and know. And you will be the last. Because no one inside will believe you.’ And then they laughed. I never felt so scared in all my life.”

She leaned closer and started to whisper.

“This wall isn’t for our protection, it’s for their comfort. And this isn’t Detroit. We lost Detroit generations ago. Where we are now ain’t nothing
but a zoo. Detroit is outside those walls.”

As I left the facility for the last time, I felt a tear trickle down my cheek. It wasn’t what I wanted, but the law was clear. And I guess I had always known that this day would come, sooner or later, when I would have to sign the papers. The facility administrator assured me I was doing the right thing, but that didn’t make it any easier.

She was still my grandmother, and I will miss her terribly.

Keith Owens is the current Deputy Director of Communications, Office of the Wayne County Executive. Keith is an award-winning journalist and columnist, the past senior editor of the Michigan Chronicle and well-known local cultural critic. He describes himself as a steam punk(ish) fantasy writer and is the co-founder of Detroit Stories Quarterly, along with Cornelius Fortune and Dr. Robert McTyre.

Are You Better off Now Than You Were Four Years Ago?...

Why you need to throw a vision board party immediately