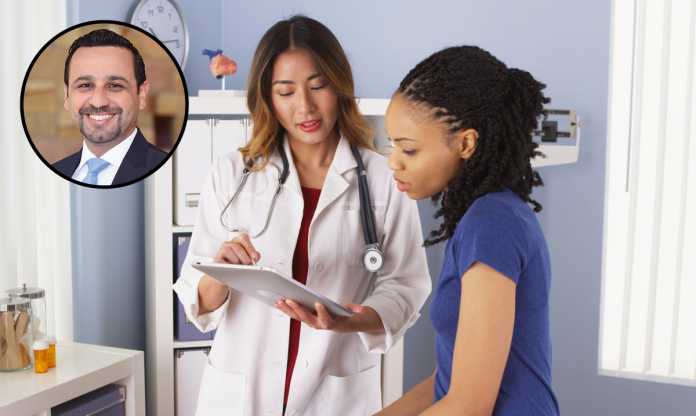 A range of options are available to treat and manage uterine fibroids, or noncancerous growths that form on the wall of the uterus and can cause pain, cramping, heavy bleeding and pressure. Ascension Medical Group physician Dr. Omar Zwain, a minimally invasive gynecologic and robotic surgeon, sees women who suffer severe fibroid symptoms and have not experienced relief from other therapies.

The most recommended and least risky procedure for women who may still want to become pregnant afterward is myomectomy, the surgical removal of fibroids from the uterus. “Minimally invasive myomectomy surgery is just as it sounds. It’s not as invasive or impactful as removing the uterus,” Dr. Zwain says.

“Minimally Invasive Gynecologic Surgery describes a group of surgical techniques in which the doctor enters the abdomen through either small incisions or natural orifices. Usually, the surgeon views the inside of the body on a video screen. The most common of these is a laparoscopy, which can be used for diagnostic or operational purposes.”

Dr. Zwain says the advancements in minimally invasive surgery are many and may allow the patient to avoid a hysterectomy, which is the removal of the uterus. “Overall, minimally invasive techniques produce fewer cases of incisional infection, less postoperative pain and blood loss. They typically lead to shorter hospital stays as well. Though any procedure can have side effects and complications we can’t account for,” he says.

Treatment for and the symptoms of fibroids can vary, but so too can the types of fibroids. Submucosal fibroids, which grow inside the uterine cavity, require a hysteroscopic procedure generally. Subserosal fibroids grow outside the uterus and can be attached to the uterus directly or by a thin stalk; those need a myomectomy, for instance.

“No one can walk into an office and say ‘I think I have fibroids,’ and we know exactly what to do for them right away,” Dr. Zwain says. “The most recent treatment we’ve found that still counts as minimally invasive would be laparoscopic ultrasound-guided surgery in which we use an ablation device to shrink fibroid tissue. Pregnancy isn’t recommended after for most women, but it’s possible. So, it’s really best to know your own situation and narrow down what would work best with your doctor.”

With most other conditions, the earlier treatment is sought the better. Fibroids are no different. A quicker diagnosis makes the possibility of minimally invasive surgery more likely, Dr. Zwain says. “It might seem easy to diagnose yourself at home, but women don’t experience the same symptoms. Heavy bleeding is more common than abdominal pressure, for example.” Ascension Michigan now has its own center specifically dedicated to the diagnosis and treatment of fibroids and other gynecologic conditions, the first of its kind in metro Detroit.

Dr. Zwain helped found the center and serves as a core specialist team member. He says, “Establishing a focus on fibroids and other issues like ovarian cysts and endometriosis lets us develop new and more innovative ways to relieve women of these symptoms while also keeping their personal concerns in mind.”

GET MORE HEALTH INFORMATION AND FIND A DOCTOR NEAR YOU BY VISITING ASCENSION.ORG/MICHIGAN OR CALLING 866-501-DOCS (3627).