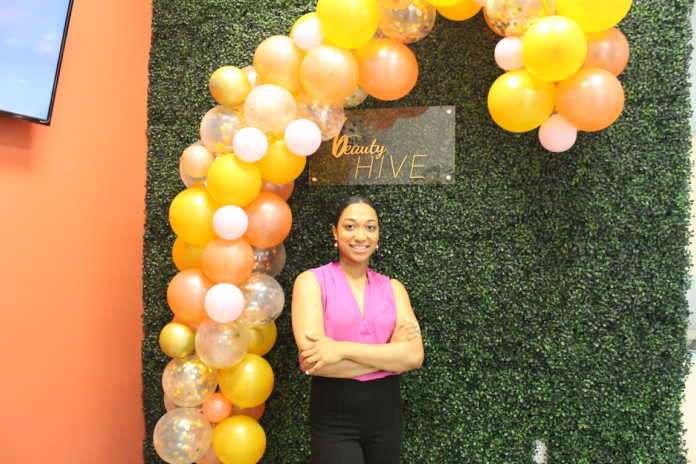 When your cup of fabulousness runneth over, there’s but one option – a bigger chalice. Bee’s Beauty Bar + Spa has just recently expanded its Southfield location to twice the size and added a host of new menu items including makeup application, 30-minute express massages and manicures.

“I felt like our demand was beyond the roof,” says salon owner Brittany “Bee” Farr. Oldies but goodies like face and body waxing, and the 90-minute hot stone massage are still a part of the playlist. They’ve added four new team members to the roster to handle their burgeoning books, and the larger space will better allow them to host private and public events like spa parties, makeup classes and other girl-powered events.

“I feel like metro Detroit needs a headquarters to be able to uplift women of color, mostly,” Farr says. “We don’t discriminate, obviously, but I was really inspired to start this whole brand because I felt like we need a space that’s professionally run, where services start on time, where we feel empowered and (where) we just feel good about ourselves. Because we take on a lot, women of color especially, but just women in general.”

Bee’s Beauty Bar opened nearly three years ago, and Farr says, the community has welcomed them with open arms. “It’s been overwhelming. People are just so, so supportive. They share us on Instagram, on Facebook,” she says. Places to get glam in Detroit are as plentiful as “what up doe’s,” but Farr says it’s her spot’s commitment to punctuality, continuous staff training and consistency that pulls them away from the pack. She promises that brow arch will be just as fleeky as it was the time before, no matter who does it.

Most important, she and her
team love what they do. She says, “I know people do things just for the
hustle of it, because it’s the trend to do beauty things because you can get
popular from doing them. But, we’re so passionate, and the women on the team
are so passionate about what we do. We like eat, breathe and sleep
beauty.”

Farr’s been an esthetician
for almost seven years, starting at department store makeup counters before
graduating to applying facials at her cousin’s hair salon. “God was
preparing me for this. It wasn’t unknown or foreign to me. Once I did have the
opportunity to expand, it was second nature to me.”

The remodel brought with it White Honey, Bee’s line of body care products. They collaborated with Detroit-based brand Sage & Soma on a custom scent, available in a candle, body oil and body scrub. “We recommend the scrub to prevent ingrown hairs and the body oil when you get out the shower, and the candle just for a little serenity,” Farr says. Purchase your piece of serenity right in the salon.

“We’re all about taking the experience home with you and creating the peace here, but (also) being able to channel that when you’re outside and you’re dealing with the world and your kids and your husband and your job,” she says.

For Farr, it’s simple: “We’re superficial as women. When we look good, we feel good.” Something as easy as a brow waxing has the power to make a woman feel like she’s better equipped to take on the day. And it’s about women coming together in genuine sisterhood.

She says she’s over the overly-processed, watered-down idea of women’s empowerment where a select few women are literally hoisted onto a pedestal to rain down their supposed wisdom unto the huddled masses. Instead, she prefers a true, sister-to-sister interaction, actually reaching out and physically touching someone, whether that’s with a hug or a deep tissue massage.

“When you touch on someone, the energy just transfers and its uplifting and its empowering. I have women who come in here and they release everything on us.”