Subscribe
Home Health + Beauty I Hated My Curls … Until I had a Child with Hair... 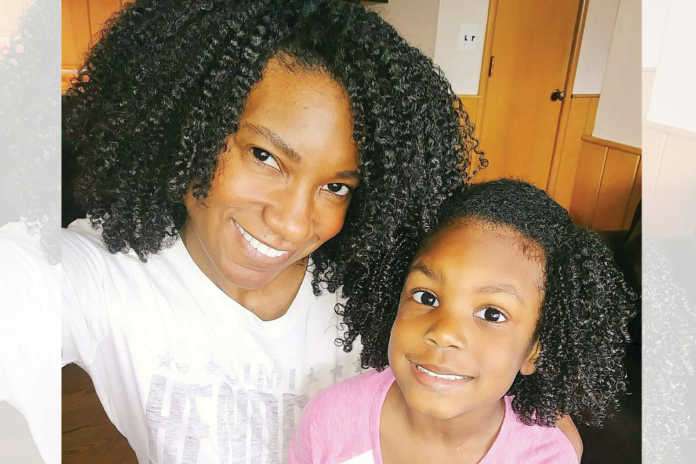 You name it, and I’ve done it in the name of preserving my blowout. I’ve sprinted across grocery store parking lots, nearly pulling a hamstring. I’ve nixed plans to take my kids to the water park. And don’t even get me started on all the times I’ve cut short an outing at the park because I could simply feel an uptick in the dew point.

One might dismiss the above as simply what women do in the name of beauty. But the lengths I have gone to make my curly hair straight are no laughing matter. There is nothing funny about spending my entire life shunning my natural hair texture. And there’s certainly nothing pleasurable about enduring scalp burns – and the subsequent scabbing – that results from the use of chemical hair straighteners.

To be clear, straight hair isn’t the enemy; it’s lovely, in fact. The problem, though, is when the pursuit of straight hair rules your life. There is a difference between straightening your hair because you want to and doing it because you believe it is necessary to be presentable, or worse yet, you know no alternative.

Consider this: I was an otherwise fully functioning adult who literally had no idea how to style or maintain my hair in its naturally curly state. From the time I was knee-high to a grasshopper, Sunday afternoons were spent sitting still as my mother blow-dried and braided my hair. When I hit the teen years, I wanted my hair even straighter, so she used a hot comb, too.

And, before long, that didn’t get my hair straight enough. Enter the chemical perms. As the late poet Maya Angelou so beautifully stated, “When you know better, you do better.” But there were few alternatives back then. In the ’80s and ’90s, drug stores didn’t have entire aisles dedicated to serving the natural hair community. There was no natural hair community. YouTube didn’t exist, and no one had any idea what a hair tutorial was.

The gross irony, however, is that this entire notion was turned on its ear with the birth of my daughter, who was born with thick, dark, perfectly clumped curls. From day one, I instilled in Kennedy that her curls were beautiful – and she agreed. I prided myself in caring for – and never straightening – her curls, despite my need to incessantly straighten mine. And herein lies the problem.

When I straightened my strands during my lengthy blowout sessions, I noticed how Kennedy, then 2, studied my every move. I could see the wheels in her head beginning to churn: If you think my curls are so pretty, why do you straighten yours? The day Kennedy would call me hypocritical was heading toward me like a freight train.

I decided, at age 38, that I would stop straightening my hair. But imagine the horror I experienced when I washed my hair and it wouldn’t curl. Come to find, all the years of applying excessive direct heat had permanently altered my curl pattern. Instead of “big chopping” – cutting off all my hair at once – I chose to trim my hair over 17 months. On my 40th birthday, the last of my damaged ends were cut off.

I’ve been on this journey for nearly five years now, and I can say, unequivocally without hesitation, that going curly is one of the best decisions I’ve ever made. Here’s what I’ve learned: First, I should have done this sooner. And secondly, the earth will not fall off its axis if my curls don’t behave the way I want them to – in fact, sometimes they’re prettier that way. And here’s what I’m most grateful for: By teaching my daughter to love her wildly curly hair, I’ve finally learned to do the same.

Courtney Conover is a freelance writer, certified yoga instructor and curly hair enthusiast who lives in Wayne with her husband Scott, a former Detroit Lions offensive lineman, and their two children, Scotty, 8, and Kennedy, 6.

Is there something missing from this Palmer Woods real estate listing?