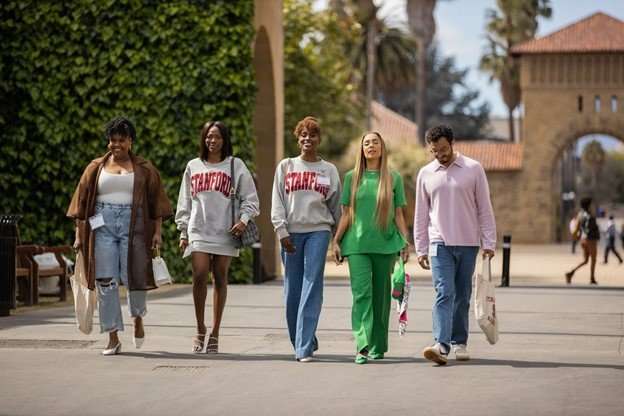 Reunited, and it feels so good?

Season 5 episode 1 of Insecure kicked off Sunday and it was a whole vibe. Issa and the crew returned to Stanford for their ten-year reunion. Before they could start celebrating, unresolved issues made things awkward.

Black Twitter was here for all of the drama. We have your highlights that got people talking.

Even after starting her own business, Issa is still unclear about her path in life. So, when it came time for her to speak about her success on a panel, she bombs by being too honest. The pressure of feeling like you need to have everything figured out as an adult was such a relatable moment that had people in their feelings.

Realizing that you’re not where u said u would be 10 years ago is rough af. First episode and the topics are on point honey ! One of the many reasons this show is so important and real #InsecureHBO

No matter what, her friends still had her back.

Love it when your friends still hype you up after bombing. 💛 #InsecureHBO

And speaking of friends…

Are they still friends?

Remember that awkwardness I was telling you about? It was in full swing when Issa and Molly were together. We saw Molly’s vulnerability when she asked where they stood in the friendship. Issa deflected.

Issa and Molly getting robbed turned out to be an icebreaker and allowed themselves to finally open up with each other. Too bad they got jacked by Cheyenne

I think it’s really interesting that we’re seeing Issa & Molly in this fragile, awkward stage. We’ve only seen them as a unit that seemingly survives everything they go through. But now we’re seeing if they can fit together after growing individually. #InsecureHBO pic.twitter.com/6l4zcu6nCp

This episode had some great comedic moments, but stayed true to its name. Kelli’s character comes into question after she finds herself a part of the “In Memoriam” ceremony. Despite this turn of events, it was what people had to say about her that brought out her insecurities. Kelli expressed she’s tired of being seen as a joke.

Not Kelli being in the memorium #InsecureHBO pic.twitter.com/iUX0xNlveC

Nah I feel Kelli, being the funny friend get old when shit ain’t a joke #InsecureHBO pic.twitter.com/gV1ARFzRiB

Issa and Lawrence: Will they, won’t they?

With the reveal of Lawrence’s baby, the question on everybody’s mind was – can they work it out? In the first episode of the final season, we were hoping for some much needed clarity. By the end of the episode, Issa decided NOT to go forward with it. This left fans split!

501 has me thinking of the relationships we keep or maintain due to comfort and time. If we were to evaluate them, we’d probably realize some don’t serve us anymore. #InsecureHBO #SeasonByeve

…And others pointed out that she was just using him for a ride.

She had him pick her up from the airport knowing she was gonna leave him once she got dropped off😭😭😭😭😭😭😭 go ‘head and pocket that money you would’ve spent on an Uber, sis. #InsecureHBO

Issa basically treated Lawrence like he was a Lyft driver. #InsecureHBO pic.twitter.com/TGxxZWBID4

And, as always, Black Twitter has to check someone’s fit.

There’s no wonder why Insecure is award-winning. The series continues to be an enriching, relatable experience. It highlights self-improvement while also explaining it’s okay if you don’t have everything figured out.

This series stays true to itself and leaves you feeling as if you’re growing with the characters.

Issa Rae and her team undoubtedly put a lot of care and time into the development of the show’s story and characters.

do you guys know what it’s like to be endlessly proud of your friend #InsecureHBO #SeasonByeve pic.twitter.com/j1YqjIdez3

Fans have expressed they’re saddened the show is ending, but are never disappointed.