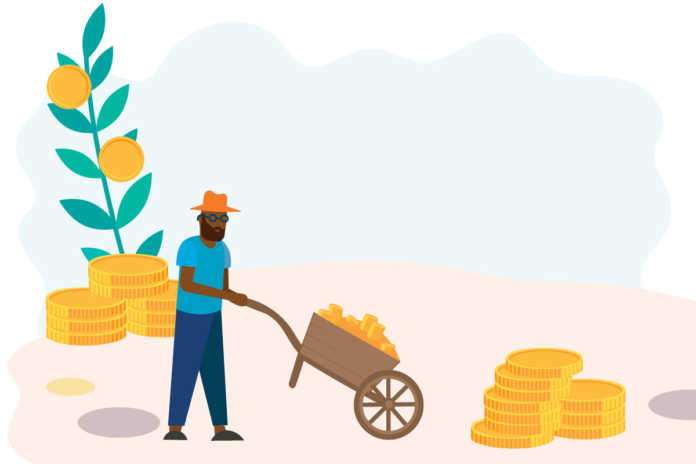 Speaking generally, white people make more money than Black people. Duh, right? That’s no huge surprise, but what may be jarring is just how much more. Calculations by the Federal Reserve Board showed that, in 2016, the median wealth for Black families in America was $17,600 compared with white families’ wealth of $171,000 – 10 times more.

This is no stroke of bad luck. At work is an interconnected, overlapping, centuries-old web of racist policies put in place to enact a very deliberate beating down and keeping down of Black people. Change must happen on a policy level, no doubt, but we are not powerless in the meantime.

We called on economist and assistant professor of economics at the University of Detroit Mercy Dr. Ablaye Camara and ELE Wealth Management president and CEO Ellis Liddell to understand what we can do to help command control of our financial future.

Plan for a Family

Liddell on child care: He says you should discuss whether you both will continue to work, or, if one of you will stay home, which one. “Those decisions need to made before you conceive. Because if you aren’t clear on that, and your wife’s idea is, ‘I want to stay home’ and the man’s thinking, ‘No, I’ll be the one staying home,’ y’all are going to have a problem, because somebody’s got to go to work.” If someone else is going to keep the baby, then you’ve got resolve whether you’ll pay for a preschool or day care – which can average between $372 to $1,100 per month, according to the National Association of Child Care Resource & Referral Agencies.

Liddell on college savings plans: He likes 529 plans, which are college savings plans sponsored by a state or state agency. But, he says, “Most people don’t save enough money for that. Whatever your car payment is, is what your payment to your child’s 529 plan should be.” He recommends asking grandparents and other relatives to give to the plan instead of toys and gifts for birthdays and holidays.

Whether taking advantage of Facebook and Instagram to market your business or downloading budgeting and bill pay apps like Mint, making smart use of technology will be imperative as our world becomes more digital.

Camara on e-banking: “Economic transactions are increasingly happening online.” E-banking and online bill pay saves on “shoe leather costs,” your expenses in time and energy. Less trips to the bank mean less gas used and less miles put on your car. “Most importantly, it actually saves time – time being a really important resource,” he says. This stored reserve can lead to improving productivity, which he says is “tantamount to earnings. We have to do everything in our power to increase the productivity of the workforce of the group for which we want to increase the net income.”

Liddell on cryptocurrency: There’s plenty of hoopla surrounding it, but he says because it’s unregulated, it’s not something we should concern ourselves with right now. Bitcoin did give us what Liddell calls “a gift” – blockchain technology, a decentralized public ledger used to record transactions across many computers. “Blockchain management allows one computer to talk to 100 computers at the same time,” he says. “You try to hack one then the other 99 computers take over and they keep switching.” This, Liddell says, will prove useful in protecting against identity theft and breaches in data security so we can protect our wealth.

Keep your cash somewhere where it can make money for you. High-yield savings accounts – which typically pay a higher interest rate than traditional savings accounts – real estate and stock in public companies are all potentially lucrative options. But remember, these are unrealized gains. Their value doesn’t become realized until you actually sell. So, if you’re inexperienced with investing, consult a financial advisor to help you make the wisest choices.

Liddell on stocks: The top four companies by market capitalization are tech giants: Apple, Amazon, Microsoft and Alphabet (Google), according to Investopedia. “The things that you use on a regular basis, those are the things that are going to make money. The market is emotional.”

Camara on CDs: A certificate of deposit is a savings certificate with a fixed maturity date and fixed interest rate. “It’s not liquid. You can’t just go take it out, but it’s there,” he says. Purchasing a three-month CD at 1.5% interest means that after the end of three months, the bank will add 1.5% to the amount you initially deposited, and then it’s yours to withdraw. “You can actually look at it as a savings at the same time as an investment, because you’re bringing in some kind of income from the fund that you have.”

Liddell on real estate: “I won’t call it safe. I don’t think anything’s safe anymore. However I would call it an investment (with which) you can become a millionaire – on paper.” He says real estate in Detroit has historically been a good market, and he thinks it’ll stay that way.

Most companies have done away with pension plans and, unless changes are made to the Social Security system, funds could run out by 2035. Money experts doubt that Congress will let it deplete and do nothing, but still, we should be proactive about our future.

Liddell on starting early: “The earlier you start planning for it, the better off you’re going to be,” he says. “If you’re a millennial, you have no choice but to save for yourself. And if you don’t save for yourself, you will work for the rest of your life, provided your body allows you to do it.”

Liddell on 401(k)s/deferred savings: Unlike pensions, deferred savings like 401(k) plans are self-managed. Many make a mistake by thinking they should just set it and forget it, but the amount you set aside should be increased one percentage point each year. He suggests starting at 10% and going up from there. “It requires active engagement.” And most employers will match what you save after a certain percentage. To those who say they can’t afford to contribute, he says, “You have to just kind of do it, you have to dive in, because you will live around what you have.” Some authorities say it’s best to set it up before your first check, the idea being if you never see the money, you won’t ever miss it.

Brace for illness or death

This can be tough to even discuss, never mind arrange, but it’s crucial that we’re properly prepared to get hurt or die. This looks like health insurance so that an accidental injury or unexpected illness doesn’t plunge you into a whirlwind of debt or bankrupt you, life insurance for beneficiaries and a trust so that you can manage your assets even when you’re gone.

Liddell on life insurance: “The African American community absolutely buys the most life insurance of any group in America, but the problem is we buy just e-freaking-nough to bury ourselves; we don’t buy enough to leave a legacy, not enough to make a difference in the next generation’s life. We buy small policies for $5,000 and $10,000.” If a mother of three dies with a million-dollar policy, for instance, each kid would inherit $333,333. “Most retirement plans after 40 years don’t have $330,000 in it. The easiest way to build wealth in America is through life insurance.”

Camara on creating a will:  “When people pass away and they leave things without a will, it creates tension among people who are left behind, sometimes undue tensions.” This may leave the people you love fighting over your stuff, and each may need to hire expensive lawyers to sort through and divvy things up. “It may actually reduce their wealth in the end, especially if the assets left are not very valuable.”

Liddell on trusts: He says if you have more than $50,000 in assets, then everything should be in the name of a trust – the title to your home, your bank account and life insurance – if beneficiaries are not the most responsible. The trust will pay out funds in increments versus handing everything over at once. It’s “controlling your assets from the grave.”

A case for a White History Month

There’s a movie about Flint coming out and it won’t have...