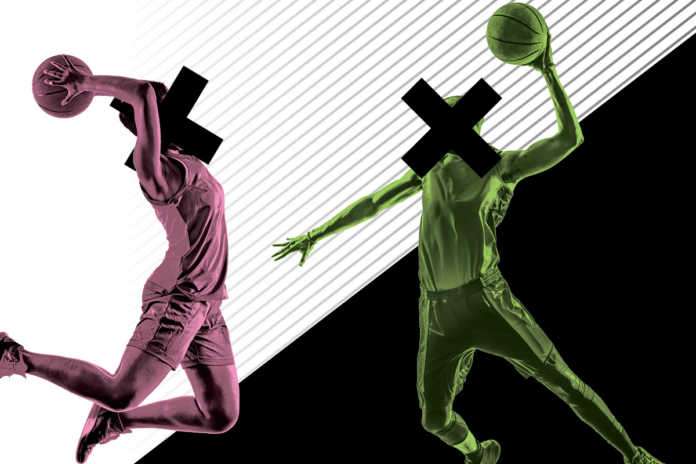 The era of basketball – and football – being “black sports” may be approaching an end thanks to the rising trend of NBA and NCAA recruiters seeking elite players from Europe and other foreign lands instead of cultivating homegrown, African American talent. And with youth sports participation rates dropping in sharp contrast to cost, black and brown players might get priced out of the sport entirely.

Word on the Court

Sports writers from here to Jersey will tell you that the next big thing in basketball is outsourced talent, and any team or organization not willing to dip their toes into the international pool will soon be as outdated as wearing Chuck Taylors on the court.

In a 2019 article for the New York Times, sports columnist Michael Powell writes, “Toronto and Mississauga, Ontario, are sprouting youth hoops prospects. Sorry, New York and other hotbeds. These players might be better.”

He says players from traditionally basketball-oriented cities like New York, Philadelphia and Baltimore just aren’t keeping up with the talented prospects coming from countries like Canada and the Netherlands – an interesting take, considering Philly and Baltimore are majority African American cities and Kemba Walker, who Powell compares his favorite Canadian players to, hails from New York.

“International play has definitely improved in recent years,” says Robert Jamerson, Detroit PAL CEO. “That isn’t a lie. The sport is more global and diverse than it’s ever been. In truth, America can’t depend on automatically being the best anymore. That’s not necessarily a bad thing – competition pushes players.”

Even still, the United States Olympic basketball team is ranked No. 1 in the world. NBA ratings soar every night as thousands of people tune in around the world to watch LeBron and Steph Curry ball out of control. So why the sudden aversion to American players?

Gregg Popovich, head coach for the San Antonio Spurs, told ESPN in 2013 that he looks for players with “character,” who’ve “gotten over themselves who understand team play, who can cheer for a teammate.” He said often, American players “have been coddled since eighth, ninth, 10th grade by various factions or groups of people. But the foreign kids don’t live with that. So they don’t feel entitled.” Yikes, Pop. Way to hang us out to dry.

The AAU and the Almighty Dollar

Many of the coaches who say European players are best point to one specific culprit in their sentiments – the Amateur Athletic Union. Popovich and his contemporaries say the AAU is broken, underfunded and predatory.

An article for Bleacher Report once described the AAU as “a loosely regulated, exploitative construct that preys on teenagers for profit. It builds them up, tells them they’re great and waits for the payoff.” It went on: “So it shouldn’t be a surprise that American basketball prospects emerge from the system without much perspective on – or appreciation for – team basketball.”

Instead of dealing with the AAU, teams copy the model of Tiago Splitter, a Brazilian player who was trained and tutored in Spain specifically for the Spurs. Splitter, assured a spot on the team already, developed with the Saski Baskonia team while the Spurs improved their professional roster and pulled him to play when he was good and ready.

Brendan Winters, head coach of Philadelphia’s top AAU team, says that the org isn’t completely in the clear for a lot of these recruiting issues. “American basketball players are the best in the world! With that being said, there are some problems. The AAU tends to focus on winning, winning, winning, and not so much the hallmarks of a strong game,” Winters says.

David Greenwood, director of Detroit PAL athletics, says the focus on winning and flashy skills is drowning out the need to teach kids the fundamentals. “Some AAU people are only invested in cherry-picking skills that fill the gyms up. The attraction is the flashiness. If you create these super teams of players, you only have a few to choose from and the rest are neglected. You have two or three elite, coddled teams and the rest are trash. It echoes into the NBA,” Greenwood says.

Tiffany King, head coach for the girls’ basketball team at Communication and Media Arts High School in Detroit, says the kids are not to blame – the coaches are. King says, “It’s easy to lose sight of what we’re trying to teach them. The attention gets to your head, and you start feeling like an NBA coach if you get one or two ballers on the team and everybody notices. But you can’t ignore the others, and winning and shooting can’t be the main thing. It’s a disservice to ignore the mental part of the game.”

King’s daughter Taylor agrees, saying that she loved traveling and playing with the AAU in high school while also noticing the discrepancies. “It never really happened on my teams, but there were some coaches and parents that only cared about your shooting game and if people were talking about you. They’d pick the ones they think ‘had a shot’ and the rest of us were just backup,” Taylor says.

Greenwood acknowledges those problems but also says that the AAU is often one of the only outlets for basketball outside of school leagues for inner-city kids across the country. “Exposure and experience creates the best overall basketball players. A lot of AAU leagues aren’t working with the top paid agents or rubbing elbows with recruiters at top schools. We don’t have the advantages and privileges other leagues might,” he says. “Teams like the Pistons run clinics – in the suburbs, for fees.”

No one’s calling the NBA racist – it’s still very much dominated by black players and, compared to other professional sports leagues, has the highest percentage of head coaches of color at 33%, according to The Institute for Diversity and Ethics in Sport at the University of Central Florida’s 2019 National Basketball Association Racial and Gender Report Card, an annual report.

The NBA earned an A+ on the issue of racial hiring, a B for gender hiring practices and an overall grade of an A. And in 2018, 16% of the NCAA’s student athletes were black; with regard to men’s basketball specifically, that jumps to 45%.

Still, critics of the AAU say that their broken system is the cause for a growing disinterest in homegrown talent. It goes without saying that the majority of those getting passed over are brown and black kids, snubbed for the Tiago Splitters of the world who had the luxury of being trained in Europe and hand delivered.

However, there are those who say fundamentals in American basketball aren’t dead. In fact, they live on in the style and prowess of the foreign players. “In a lot of ways, basketball wouldn’t be a global market if not for American, inner-city players,” Greenwood says. “People like Kenny Smith went over there to play internationally and gave them the basics. Without American basketball, there would be no European or any-other-country basketball.”

This country has also historically made black people and boys feel like one of the few paths to legitimate validation is through “black sports.” Black Americans – albeit a small number – have used football and basketball to build wealth and notoriety. So to now value them less than players coming from abroad because of a broken American system is a bit of a slap in the face.

“We just need to get back to the basics,” coach King says. “Once we have a strong foundation here in the states, the foreigners won’t be able to touch us. American talent is strong and innate. The NBA and the colleges could pump money into the programs, and that would help a lot.”

Black Travel Organization Has Lofty Goals to Even the Tourism Playing...