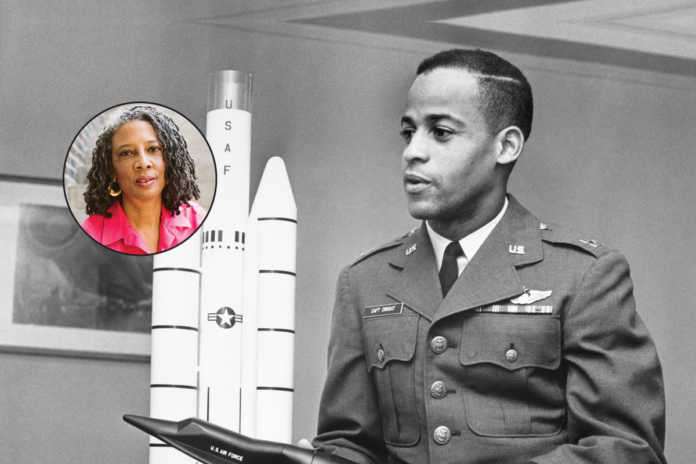 This year, America has been celebrating the 50th anniversary of the Apollo 11 moon landing. I’ll never forget the moment that I sat in front of the television, transfixed. “I want to do that,” I thought at age 9. “I’m going to the moon.” My dream, it turns out, was thwarted not by race or gender, but by motion sickness.

I can barely get on a plane without barfing. But I also quickly realized that my romance with spaceflight was just that – romance. The notion of space exploration lures me to poetry, not to aerospace engineering. Becoming an astronaut wasn’t my destiny.

Edward Dwight got much closer to realizing his dream of becoming the first black man on the moon, but it wasn’t the 85-year-old’s destiny, either. In 1961, President Kennedy announced that the United States would beat the Russians and put a man on the moon.

Edward R. Murrow, the famous journalist who was then the director of the United States Information Agency, asked the administration: “What if we sent a black man to the moon?” The president agreed that the team should be diverse and directed NASA to find a black candidate for the program.

That candidate was a young officer who was already in training to be a test pilot: Ed Dwight. In 1962, Dwight entered the Aerospace Research Pilot School (ARPS) and rocketed into fame in the African American community as NASA’s future black astronaut. But there were many hurdles in front of him.

Even with the personal backing of the president, who had called his parents to congratulate them on their son’s induction into the space program, many whites questioned his qualifications for the program. Dwight told the NewYork Times earlier this year that there was a concerted effort by the white establishment to break him and “get him out of here in six months.”

That didn’t happen. At the age of 30, Dwight received his certification from ARPS, putting him in line to be the world’s first black astronaut. He didn’t lose hope when the first class was announced in 1963 and he was not among the 14 chosen.

He felt sure he would be in the second class that would be selected in 1965. But in the interim, tragedy struck. President Kennedy was assassinated in November 1963. While the nation mourned the loss of a visionary leader, Dwight also mourned the death of a vision.

There was no longer someone at the top pushing his candidacy forward. Within months, Dwight was sidelined. He left the Air Force in 1966. Racism can be a formidable foe. It kept Dwight from reaching the moon, but that didn’t stop him from landing among the stars.

While forging a new life for himself as an IBM executive and later as a real estate developer in Denver, Dwight remembered the little boy inside himself who had always wanted to be an artist. Nearly a decade after leaving the space program, he received his first commission in 1974 to craft a bronze statue in honor of Colorado’s first black lieutenant governor.

At 45, Dwight became a professional artist. From that moment, he has dedicated his life to sculpting the often-forgotten history of African Americans, from blacks on the Western frontier to the history of jazz. If you’ve been to Hart Plaza, you’ve seen his evocative, emotional work. He was the sculptor of Detroit’s powerful Gateway to Freedom International Memorial to the Underground Railroad.

The monument, which was commissioned to celebrate our city’s 300th birthday, shows runaway slaves about to embark upon freedom in Canada. Across the Detroit River in Windsor, Ontario, stands a companion monument called Tower of Freedom, depicting the former slaves gaining their freedom on foreign shores.

The astronauts on the Apollo 11 team have long retired or passed away. But Dwight is still sculpting the story of the black experience in America, with commissions all over the United States. As Dwight told The Guardian four years ago, “My work is really just about the flow of ironies.”

The irony being that a people who arrived on these shores in chains were able to transform this nation, nevertheless, and the irony that he may have been denied the opportunity to leave his footprint on the moon, but his footprint on this earth will influence history for generations to come.

Credit Social Technologies with Keeping Us Hanging on During Quarantine