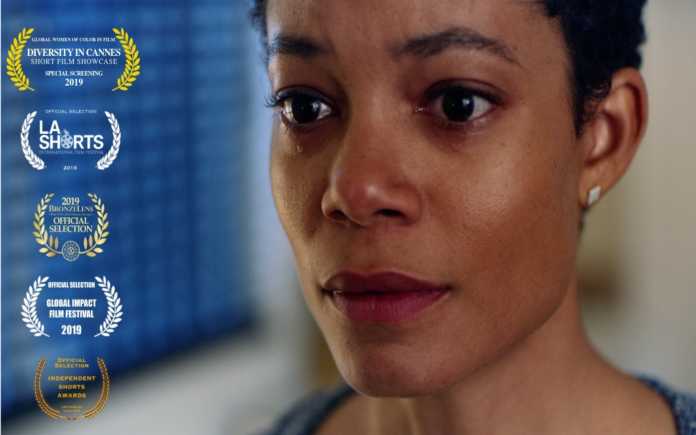 Attempts to outlaw early abortions in Alabama, Georgia, Ohio and elsewhere have many anxiously considering the consequences should anti-choice advocates succeed in getting the Supreme Court to reexamine the issue of abortion rights.

In the not-so-distant, not-so-fictional world that Jabree Webber has created with her short film, It Happened One Night, we get to peek inside a world in which women’s reproductive rights have been stripped and Roe v. Wade is no longer.

Webber is writer, producer and director of the film set in 2022 which follows black protagonist Tia (General Hospital’s Paulina Bugembe) as she grapples with whether to go forward with a pregnancy. Webber doesn’t spill the exact details surrounding the circumstances by which Tia becomes pregnant, but she says the film has “a bit of #MeToo twist” – seeming to suggest that our lead may have been sexually assaulted or coerced. We watch as Tia and her fiancé toss around what to do.

“Instead of talking about it in these broad strokes, I really wanted to see how it affects people in their day-to-day, interpersonal relationships and how these really tough conversations go inside someone’s home,” Webber says. “I’ve always been curious about cases of rape and incest and so on as it pertains to access to abortion, which it can be argued that is health care for women.”

She’s been hitting the festival circuit all summer, starting with Cannes in May, LA Shorts a few weeks back, and Webber is coming home to show on the last day of the African World Film Festival which coincides with the African World Festival at the Wright, Aug. 16-18.

“This was sort of a passion project.” She says she had no expectations going in, but says, “It was just something I felt like I needed to do. I wanted to take action and use my art to do so.” Webber says, “I was a really dramatic kid.” She started acting in youth theater in Detroit before graduating high school at 16 and moving out West for the University of Southern California’s theater program. After graduating from USC, Webber says she still wanted to act but thought her calling larger than just being in front of the camera.

She wasn’t willing to sit around waiting for things to happen. In true young person fashion, she set off to make things happen for herself and to tell the stories she thinks should be told. The response to It Happened One Nighthas been encouraging. Webber says, “People will come up and just simply say, ‘Can I hug you?’ or ‘Thank you for this.’” Not surprising, some have been less than onboard with the film’s pro-choice message.

“I have definitely had a fair share of people express their views, but the film isn’t really about bashing someone’s choice, and actually, you have to watch the film to see what she actually chooses. The film is about supporting people no matter what they choose,” she says. Webber says she hopes to plant seeds of empathy, to open hearts and minds to the idea that while an abortion may not be something you’d consider for yourself, it may be what’s right for the next woman.

5 Tips for Talking to Kids About Race