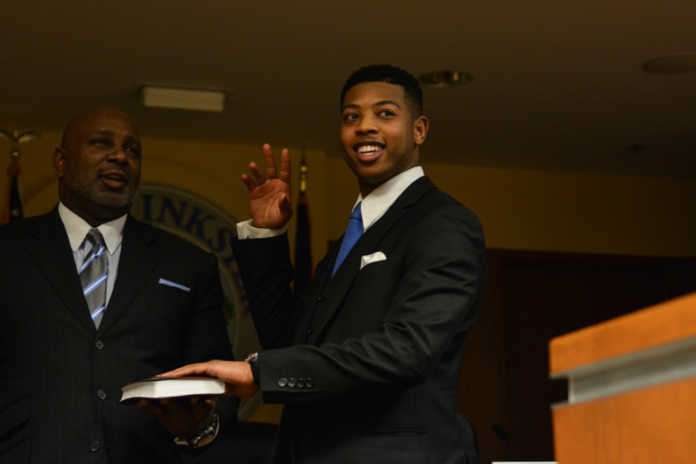 Do you remember what you were doing when you were 21? Perhaps you can’t remember that far back, or maybe you’re choosing not to reminisce. In 2005, the year I reached legal drinking age, I was making a lot of what we’d later call “bad life decisions.” Nothing terrible, like doing (hard) drugs or stealing. But maybe a failed situationship or two, and quite a few blackout bar hops across East Lansing.

You may not remember all the details of your 21st year, but we all remember what happened after Jewell Jones turned 21. After all, the Inkster native won international headlines in 2017 for being the youngest person elected to the Michigan House of Representatives. And suddenly, we all lost collective memory of what little we all knew at that age. If 21 seemed mature enough to be an elected official, 21 itself seemed mature.

The baby-faced Jones couldn’t have been in a better place at a better time. At 20, he was Inkster’s youngest-ever city councilperson, a feat that got little notice beyond Inkster. (Hold on to this thought.) Unfortunate circumstance led him to run for state office.

His predecessor holding the seat in the 11th District, Julie Plawecki, died suddenly, and political operatives – no doubt seeing a rare opportunity to replace a white woman from Dearborn Heights with, well, anyone Black from anywhere but Dearborn Heights – turned to Jones to run for the seat in the following election rather than Plawecki’s daughter, who’d filled in for her mother after a special election.

But when Jones was sworn in, the country was still in shock from electing Trump and there was a new appetite for young leadership, especially from underrepresented communities. Factor in Jones’ age and the youthful swagger that comes with it (not only recalling a young community organizer from Chicago who became president, but also a young Michigan state rep who became Detroit’s mayor), and a Cinderella narrative building around the hardscrabble town of Inkster, you’ve now set the stage for a rising star.

Jewell Jones was given a choice: to either be Inkster’s hometown hero and build a foundation for promising Black leadership in a state that still so desperately needs it – or just be Jewell Jones. It’s clear he’s chosen the latter. Let’s start with what Jones has actually done. In his first three years in the House, Jones introduced 20 bills to the House floor, a vast number of them tweaks to existing laws on the books.

One notable bill, which, if passed, would change whether some juvenile offenders are sentenced as adults. But of those 20, only one has successfully passed both chambers of the state legislature: a relatively low-stakes public act that determines how county commission boards appoint a board of county auditors.

Aside from that, the only other thing Jones has offered to his 11th District constituents – and followers of his who don’t live there – is the notoriety and celebrity that comes with being the youngest elected state rep. Sure, he was able to secure $500,000 in funding for the Garden City Fire Department, and he’s held a number of appearance-making town halls.

But in general, Jones’ name is only found as a co-sponsor on a number of mundane resolutions and bills that have had little impact on Michiganders, especially those in his home district. He did, however, take time to weigh in on the mass shootings in El Paso, Texas and Dayton, Ohio, and the 2017 white supremacist rally in Charlottesville. There’s been no word on George Floyd, Breonna Taylor or anything that has happened in metro Detroit these last few weeks.

Give Jones some credit for taking the chance at his age. It undoubtedly fueled a wave of go-getters in the young millennial/Gen Z sect to pursue other seats in Lansing and on Detroit’s charter commission, and even take a shot at becoming Detroit’s mayor. Not all were successful, but it did signal that younger voices were needed in some of our most heated political conversations.

But where Jones’ voice has been found a lot these days is on Twitter and Instagram, posting alarming, right-leaning or outright confusing messages about “Black-on-Black crime” (using that term loosely here) and archaic views on Black women’s roles in relationships, selfies and cryptic messages more becoming of a late-‘90s R&B album’s liner notes than a state representative making a $71,000 taxpayer-funded salary. And then there’s the smug dismissal of folks trying to engage in respectful dialogue and the relentless sparring with anyone who dares to criticize him about any of it.

And people have indeed criticized the young Mr. Jones. Just pop his name in the Twitter search bar and see for yourself. Problem is, despite metro Detroit having extremely vocal and screenshot-savvy young folks demanding accountability from the powers that be (my timelines are filled with these folks having difficult conversations ranging from police brutality to sexually inappropriate behavior among public or popular local figures), those discussions are overlooked in the greater sphere.

You’d think a cocky lawmaker who posts a photo of himself getting a pedicure during a pandemic to his main account would, at the very least, spark just a bit of curiosity from Michigan’s capitol press corps, but it seems those reporters spent the glut of this summer consumed with the thrilling, edge-of-your-seat adventure of a (*checks notes*) barber in Owosso.

Jones knows this. He knows that because he escapes media scrutiny – he was pulled over in May 2018 for an open intoxicant charge, and it got zero coverage thereafter – that he can get away with this. Inkster, and much of western Wayne County for that matter, isn’t as covered as the Detroit or Warren mayor’s office, the Oakland County executive’s office, or any scofflaw the Channel 7 Action News investigators just happen to be chasing for sweeps week, so that allows Jones to fly under the radar.

The luster that comes with being young and Black in Michigan politics has always been a shield for critical dialogue, and he knows this as well. Jewell Jones can get by with just being, well, Jewell Jones, perfectly tapered and crisp in every photo and wearing Yays all over the place, so long as he does the bare minimum in Lansing with no questions asked.

No one should try to get in a young brother’s way, right? Older women see their grandsons and nephews in him. Older men see a younger version of themselves. And folks his age should just be happy to have someone representing them at this level, right?

Problem is, it’s that same kind of arrogance that brought down former Detroit Mayor Kwame Kilpatrick, that “y’all’s boy” mentality that we should just let a brother slide because he’s young and doing his best. That same mentality is why half the city was holding its breath when, despite all the things Kilpatrick had done in office, there was still a chance he might get out the pen. It’s one of the hardest conversations for Black people, to talk about our own and see through that luster. But it’s a talk that’s long overdue.

The thing is, though, by the time you read this it’ll be too late for voters in the 11th District to hold Jones accountable for the events of the last few weeks and his record thus far. He has no Democratic challenger in the August primary and will likely cruise to a November re-election over the same Republican opponent (unless, of course, y’all want to vote for a Republican in this climate…) he defeated in the last cycle.

But here’s what can be done going forward: Put Rep. Jones on notice. Keep your feet on his neck, because he is a public servant who agreed to this scrutiny the moment he was sworn in. Write letters to his office, but also the Michigan Democrats who also seem to be mum on all his activity. And maybe drop a line to y’all’s Big Gretch for some razzle dazzle since she – I’m hoping, still – has your attention now.

Here’s a tip from someone who used to work in Detroit’s city hall: Tag elected officials’ aides, secretaries and public information officers on their social media pages, never the official’s main account. And as for Jones himself? It’s time for him to grow up. Youth is wasted on the young, but you’re not allowed to let it go to waste when this is the life you’ve chosen.

How to survive your family dinners this year

Keeping the Great Lakes Safe with the U.S. Coast Guard