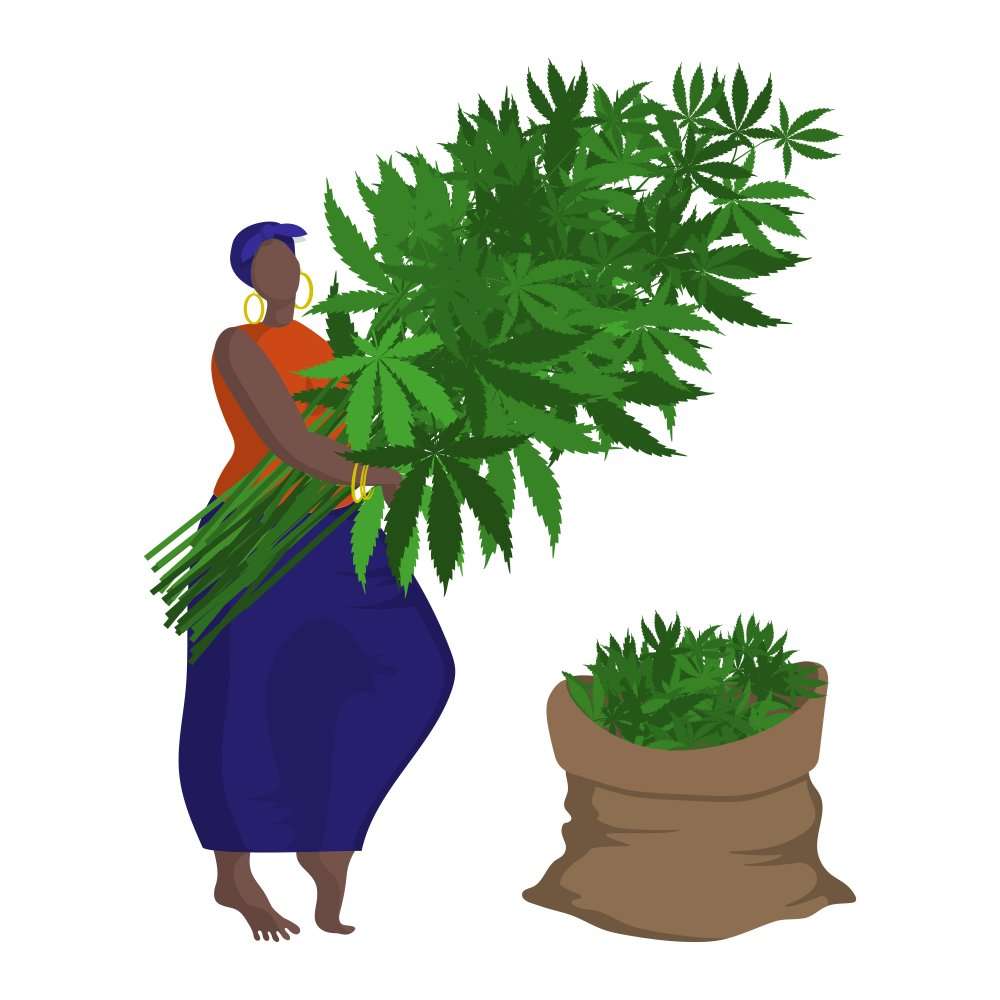 It’s a pretty funny story– I started out trimming in the cannabis industry simply to find the best weed in Detroit. As a consumer of the sticky icky for most of my adult life, I’d had the experience of tasting most of what the world has to offer, from Cali’s best to the exotic flower of Johannesburg, South Africa. Detroit’s cannabis industry has been legal since 2018 and the amount of places to buy weed expanded to mimic liquor stores in the hood; they were popping up on every corner.

Increased access led to increased interest, not just in the process behind cultivating cannabis but also the people behind it. I didn’t just want to appreciate the art, I wanted to support the creation. I started looking for opportunities to contribute and learn, and I found trimming.

For those that don’t know, the smokable parts of cannabis flowers grow in dense, tightly-packed nuggets or “nugs” on the stem of the plant. It’s a trimmers job to “trim” all of the leaves and stems from these nuggets, separate them from the stem, and only put the very biggest and best nugs on the shelves to sell to consumers. It’s a sticky, tedious job that involves removing seeds and stem fragments from bud to be sold by hand.

My first time trimming was for 1st Quality Medz in River Rouge, a Black woman-owned cultivation house under the leadership of Vetra Stephens. 1st Quality Meds paid $25 per hour to trimmers during their harvest season (which is typically in October.) I’d heard about the opportunity directly from Vetra. While I only trimmed at 1st Quality Medz for 3 days, I made a cool $375 at the end of my shifts, which felt like a great amount for a short time of work. When Vetra suggested that I join another team of women who trim at several cultivation centers in Detroit, I thought it would be a great way to make extra money for Christmas and I’d get to sample some of the incredible strains grown in Detroit. So I connected with Trusted Herb Care.

Through Trusted Herb Care, I trimmed for three different facilities over the span of two weeks; GoldKine Cannabis on Groesbeck Highway, Tango Jack in Warren and again at 1st Quality Medz in River Rouge. Vetra told me to call a woman named “Amanda”, and with Vetra’s recommendation, I was hired immediately–no application, references or drug tests needed. All I was asked to do was show up, and I could easily do that. After a couple days, Trusted Herb Care’s owner Dina Misho called me to confirm my schedule. At one point, Dina was one of the best trimmers in the city. She ultimately became a business owner and focused her attention on bringing other trimmers and weed professionals to the table, specifically Black ones, and giving them the same opportunities. Dina employs leaders and trainers to work with her trimmers, and they make an extra $10 more than we do (average trim salary is $15 per hour.)

Working with Trusted Herb Care taught me the importance of a well-oiled communication machine in the cannabis industry. Trusted Herb Care has three different WhatsApp group chats that require 24/7 engagement from trimmers, of which there are over 100. Because of the ever-changing and flexible needs and schedules of grow houses and dispensaries, this was more than necessary and taken VERY seriously.

You check in at 6, to a chorus of “good mornings” from your team members. You confirm your schedule for the week with a simple yes or no, and then receive instructions for when to arrive, where and how long the trim job will last. Average times for trim jobs range from 8 in the morning to 5 in the afternoon.

We’re told we can work as much or as little as we want as long as we keep to our schedule. The group chat proved to be an adventure. We could find our schedules there, sure, but we might also get a voicemail from Dina or her right-hand man and sister Tanya (Tee-Tee), angrily yelling at us for too many call-offs or trimmers being late to appointments. The work environment was just this side of professional, but very stringent and very real. Dina runs a tight ship that speaks to her reputation as a renowned trimmer. Expectations were high and mess wasn’t tolerated–we all knew we could be replaced at any moment and problems caused directly affected Dina’s money, and by extension, our money.

If you read the group chats, you might think both Dina and Tee-Tee were suffering from high blood pressure and in urgent need of a long vacation and some business management. But most days were pretty uneventful, and it didn’t detract from the experience of working with a high-level trim company.

Upon arrival at my first trim day at Goldkine, I was asked to arrive and wait in my car. I texted the group chat that I had arrived, then muted it and started to wait….and wait. Eventually, I realized that the side entrance was where all of the cars were parked. There wasn’t a sign or anything to let me know exactly where to enter, which I understood. Most grow houses are unassuming, nondescript buildings that blend into the background, but Goldkine has a big billboard on the side with beautifully painted murals and artwork aligning every single wall of the facility. You can’t ignore the fact that they’re making weed here–it’s obvious as soon as you cross the threshold.

Once you step into the key-coded building, there’s a check in-station that takes your photo upon arrival. Through another key-coded door was the kitchen and lounge area where there was a stainless-steel refrigerator full of Pepsi, Mountain Dew, iced teas and other beverages and snacks set aside just for the workers. Once inside, the men and women were separated into two rooms where we disrobed and changed into our “scrubs”, attire set aside specifically for the sticky, dusty job of trimming. Sizes were arranged from XS to 5X in combat green, black and beige for variety. We all got in line to go through what I can only call some sort of vacuum contraption. We each stepped in and it sucked and blew all the dust and particles from our clothes, so we wouldn’t contaminate the pure cannabis. It lasted only a few seconds, but it made you feel like you were a part of something futuristic.

Goldkine’s facility is vast; many hallways, many doors and many rooms that are all dedicated to growing, harvesting and packaging cannabis products. Everything from the stems to the seeds is used for something. Once in the room labeled “Trim”, we were told to grab scissors, black rubber gloves, two round baskets and 2 rectangular tubs that would catch the trim from the flower. And then, we got to work.

There was a constant stream of Drake songs blaring over the loudspeakers, but most of our team wore headphones and kept their heads down, trimming away. Once our buckets were full of cleaned trimmed nuggets, we stood in line to weigh the haul. Our group consisted mostly of women, young, Black and in their 20s, long eye lashes and weaved hair with spiked nails to boot. But then there were those women in their 30-40s, who have been trimming for years, working two and three jobs and getting paid cash or under the table. Our team included about 20-25 people on my first day but some days there’s as few as ten people working to finish the harvest. Leaders buzzed around the tables of trimmers inspecting their finished buds, always offering criticism or sometimes encouragement to get better, trim faster. We were given one 15-minute break and a 30-45 minute lunch break and we had to remove our scrubs to leave the facility. Most of us scrambled to our cars to snack or check for drama in the group chat until the bell rang and it was time to snip again.

Pay day is always on friday and although I’m told there was a direct deposit at one time, we used physical checks. Lots of us, I learned from the chat, didn’t have bank accounts and were told where to go to get our checks cashed at a cousin’s liquor store in Southfield. Dina mentioned that her bank found out the business indulged in cannabis and shut down her account, which is the reason why we had to receive physical checks. Banking and finance is a shaky situation in the cannabis sphere to say the least. Due to weed still being federally illegal, the nation’s banks often refuse to work with cannabis entrepreneurs and their accounts officially. This leads to some weird errors and delays sometimes, like my name being grossly misspelled on my check the first week.

In addition to the $15 per hour, we had to pay Dina $10 each day we worked. If we were late, that jumped to $15 and if we were scheduled and didn’t show, that was $20 taken out of our checks. I was told it’s the cost of business when working in cannabis.

On Friday at 1pm, us trimmers with our sore arms stood in line outside in the parking lot of Goldkine, in front of Dina’s car, to hear our names called and get our paychecks. It reminded me of what it must have felt like to work at a factory back in the day. I thought of my grandfather, working in a manner similar to trimming, constant motions on an assembly line day after day, year after year for three decades while raising a family of eight. I wondered if I could do the same.

I don’t think I would last past the month, to be honest, even with something as fun as trimming. But that day, I took my check for $330 and deposited it gleefully, fully appreciating the sentiment of “TGIF.”

BLAC’s Best of the Rest: Let’s get away