Stroll through Michigan's oldest nondenominational cemetery, where the past meets the present and the living mingle with the dead.

The ancient Egyptians believed that to erase one’s memory on Earth was to erase one’s immortality. We erect great monuments and carve quotes and accomplishments into indestructible stone to honor and recall our dead. Nowhere else in Detroit is this reverence better on display than at Elmwood Cemetery.

Founded in 1846 and teeming with history, to bend the blades of grass
at a cemetery like Elmwood is to travel back in time. Across its 86 acres,
Detroit’s founding families, abolitionists and U.S. Colored Troops soldiers
rest in the oldest nondenominational, continuously operating cemetery in
Michigan.

The hills may roll at Elmwood but the field is level. Beside the illustrious men and women whose names history will forever repeat – Martha Jean “The Queen” Steinberg, Charles H. Wright, Elizabeth Denison Forth – lie those who are enshrined only in the memories of the ones who loved them.

Elmwood Cemetery was built on the land that, in 1763, hosted the Battle of Bloody Run and shares a fence with Mount Elliott Cemetery, founded in 1845 as a Catholic-only graveyard. In 1846, six Protestants collaborated on a burial that would welcome all.

Elmwood Historic Foundation Executive Director Joan Capuano says, “You came in and, regardless of your race, your heritage, your religion, you picked out your spot and your neighbors were your neighbors. That was really forward thinking in the 1800s.” The founders started with a little over 40 acres, and by 1896, they’d acquired new land and grown to 86 acres.

Landscaping architect Frederick Law Omsted – responsible for New York City’s Central Park and our dear Belle Isle – was brought in to sculpt the grounds. “We were established before, really, parks were common, and so we’re what was called a ‘rural cemetery,’” Capuano says.

“And people would go to church, they’d bring their children and their lunches and their gardening tools, and they would come to the cemetery and spend the day tending their loved one’s grave.”

From the modest to the grandiose, the memorial art is a mood all its own at Elmwood. Before granite came into fashion, headstones and monuments were customarily made from limestone, sandstone or marble, materials much more susceptible to weathering. Throughout the property you’ll find older burial art so worn that nothing can be read in the stone and others completely broken at the base.

Capuano hopes a grant will allow the foundation to start to restore these monuments, like that of George DeBaptiste, who recruited soldiers for what would become known as the 102nd U.S. Colored Troops – one of the first colored infantries to fight for the Union during the Civil War – and ferried escaping slaves across the Detroit River to Canada.

“It breaks my heart that his monument is like that,” Capuano says of the stone, snapped right at the grass. She favors granite for its sturdiness; the rock started to become popular for grave markers in the late 19th century. Traipse amongst the newer monuments and you’ll notice that a lot of them are made from slick, dark granite that’s been laser engraved with portraits and other realistic imagery.

The stone of
one musician laid to rest at Elmwood is etched with the sheet music for his
songs and a heartfelt note from his wife on their anniversary; in it she longs
for more time but ultimately acquiesces that their love transcends time.

Marvel at the tall, pointed monuments known as towering obelisks scattered around the property. “Right after the construction of the Washington Monument, they really came into vogue as memorial art. It would tend to indicate somebody who achieved everything they set out to,” Capuano says.

The tallest one on the property is comprised of seven pieces, the largest were pulled through the streets of Detroit by horse-drawn wagons and arranged with a system of ropes and pullies. Jacob Merritt Howard helped found the Republican Party and was one of the writers of the 13th, 14th and 15th amendments, known as the “Reconstruction Amendments” and having to do with the abolishment of slavery, reconstruction and voting rights, respectively.

Capuano says, “He felt so strong about his views to abolish slavery that he had the words of the 13th Amendment inscribed right upon the face of his monument.” Howard left instructions with his family that, upon his death, a towering obelisk was to be constructed but, he said, if even one man was still enslaved when he died then the obelisk was to be purposely broken – which is how it stands today. He died in 1871, but as Capuano notes, the enslaved were not immediately set free at the end of the Civil War.

Sarcophaguses – decorated box-like structures that house the body inside – are also popular at Elmwood. Railroad magnate Albert Stevens’ sarcophagus is modeled after that of a Roman general from 305 B.C., but Stevens’ isn’t quite at it appears. We won’t give away the gag, but there’s a bit of smoke – and maybe a mirror or two.

Detroit’s first – and longest serving – mayor Coleman A. Young rests at Elmwood in a black granite sarcophagus. Elsewhere in the grounds, spot servicemen and women by the stars, eagles or sabers that festoon their monuments. And for residents whose lives were cut short, either by a premature death or a mission unfulfilled – look out for tree trunk-like stones with the limbs chopped off.

When Chief Pontiac and his Native allies thwarted a planned ambush by British troops on July 31, 1763 on the site that is now Elmwood Cemetery, it’s said that the creek ran red with blood. Following development in the 19th century, Elmwood is the only place in the city where the creek is “daylighted” – or runs above ground.

Ten years ago, developer Richard Baron and University of Detroit Mercy professor of architecture Steven Vogel secured Kresge funding for the preliminary stages of a plan to daylight Bloody Run Creek from the Detroit River through to Midtown. Capuano says, if it happens, the creek could be used for kayaking, canoeing and the like.

In 2015, Elmwood was certified as Detroit’s first arboretum. Tags on the site’s trees give its scientific name, common English name and also a QR code that you can scan with your smartphone to get more information on the particular species. A large American elm also stands guard over the property. “It’s kind of shocking that it survived the Dutch elm disease,” Capuano says. “Our arborists think it’s because it didn’t have other elm trees around it.”

The disease was first reported in North America in 1928 and is believed to have been carried by bark beetles that hitched a ride with a shipment of logs from the Netherlands. It spread across the country, reaching Detroit by 1950. According to a New York Times article, of the estimated 77 million elms in North America in 1930, over 75% had been lost by 1989.

In 2016, The National Park Service recognized Elmwood Cemetery as a significant site of the Underground Railroad. Capuano says it’s a recognition of the cohort of freedom seekers and freedom fighters, “key members, like George DeBaptiste,” who are enshrined in its soil. 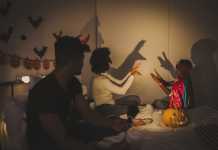