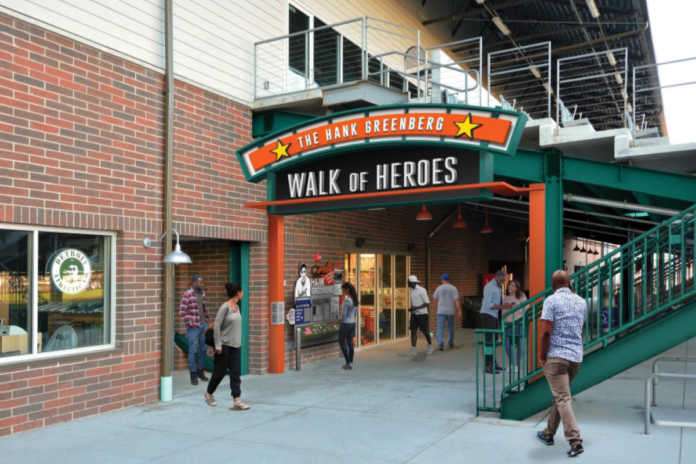 The third and final stage of The Corner Ballpark restoration wrapped last month with the completion of the Hank Greenberg Walk of Heroes exhibit, a permanent celebratory display of exceptional talent and Michigan’s long athletic history. Walk of Heroes is a collaboration of funding and effort from the Greenberg family, the William Davidson Foundation and Detroit PAL.

According to the ballpark’s website, the walk features 12 highlighted figures who “displayed exceptional character, innovation and trailblazing spirit in the sports field and the community at large,” such as Will Robinson, Anne Doyle and good ol’ Norman “Turkey” Stearnes.

The family of Daedra Charles-Furlow attended the debut on Oct. 3 and gave an emotional dedication. Charles-Furlow was a Women’s Basketball Hall of Fame inductee and 1992 Olympic bronze medalist who died in her hometown of Detroit last year.

She’s among the first set of highlighted figures in the exhibit; they’ll be rotated periodically. Detroit PAL CEO Robert Jamerson says the goal for the Walk of Heroes is to make it as engaging and challenging as possible. Features were chosen through a process that involved the PAL board, the community and Detroit youth.

Jamerson played PAL football himself as a kid, and he says the focus for the organization now is broadening horizons. “The main thing we hope the walk exhibits is that sports is a great mental and physical dedication, but it can also be a facilitator to other things,” he says. “Look at Jemele Hill killing it in sports journalism. With the values and lessons that sports and sports education gives you, the resources and avenues are endless.”

Trump’s actions are ‘not who we are as Americans,’ Duggan says