Subscribe
Home Arts + Culture The Detroit Academy of Arts & Sciences Choir Revels in the ‘One... 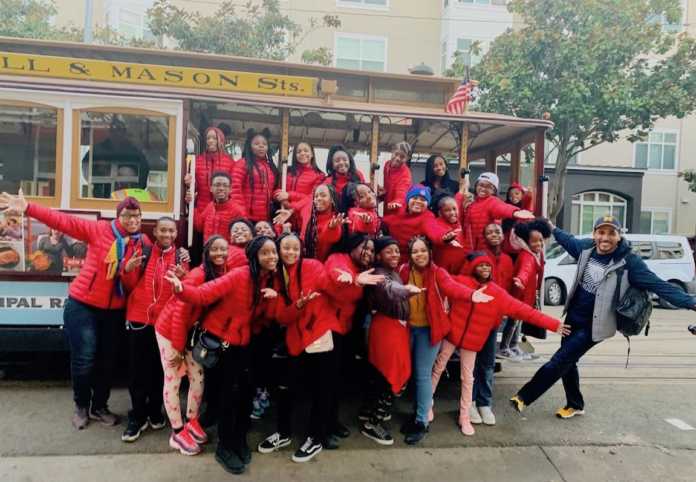 Watch the “One Nation Under a Groove” music video by the Detroit Academy of Arts & Sciences choir below, then nod when we say those kids are a national treasure. George Clinton agrees. The father of funk gave the DAAS kids social media props for their remix of the 1978 bop that honored old-school sound and Detroit’s cultural gems.

Renee Monforton, vice president of marketing and communication for Detroit Metro Convention & Visitors Bureau (Visit Detroit), says the response to something that was supposed to be a fun holiday greeting is nothing short of amazing.

“We brought the idea to Ms. Angela Kee (DAAS’ choir director) as a virtual holiday card at first, something to highlight both the best tourism spots and Detroit’s talented kids. Then people kept sharing and liking, and before we knew it the video was playing on the street screen at Cobo Hall and had a million views online,” Monforton says.

For a 13-year-old, the only thing better than remixing a well-loved song in fun locales and getting a shout out from a famous artist might be flying for the first time. In early January, Visit Detroit took 25 students to San Francisco to perform in front of a crowd of 5,000 at the PCMA Convening Leaders Conference. “Man, we felt like rock stars! Many of the kids were flying for the first time, you could hear them squealing on the plane,” Kee says.

Eighth grader King Bethel, who sang at the Piston’s game on Jan. 11, also joined the San Fran trip. He says he plans to become successful in music “immediately” and that the choir is like family to him. “It was an amazing trip and we ate so much good food,” King says. “I feel like I can’t describe my experiences with the choir in one word. We put all our heart and good feeling into it, and we never stop selling our city.”

“One Nation Under a Groove” is hardly the DAAS choir’s first shining moment. Under the guidance of Kee, the DAAS kids have made a name for themselves as one of the best youth choirs in the city – they even preformed for the Obamas.

That reputation, Kee says, is one built on dedication, presentation and taking pride in every aspect of a performance. She’s been stressing those values to her students since 2001, back when she was managing a small group of students for the school’s Christmas program.

“Everything you do as a singer has a particular level of excellence, from your facial expressions and posture before you take the stage to your clothing to the smile you use to accept a compliment after,” Kee says. “You are your own representative, but we all have to be on point for the group.”

She says all the direction in the world wouldn’t make the choir excellent if the kids weren’t that already. In 2002, the choir was a small after-school club that scavenged chairs from other rooms. In 2020, kids enroll at DAAS just for a chance to sing with the choir.

“They have fun and they make a positive impact on people who hear them because the love is there,” says Kee. “But they don’t get overwhelmed by the fame. The main thing they’re worried about is whether there’ll be pizza afterwards!”

Effects to Medicare, Medicaid & Veteran Plans Under the Affordable Care...