Subscribe
Home News + Features The Life of Colin Powell: From military to politics to philanthropy 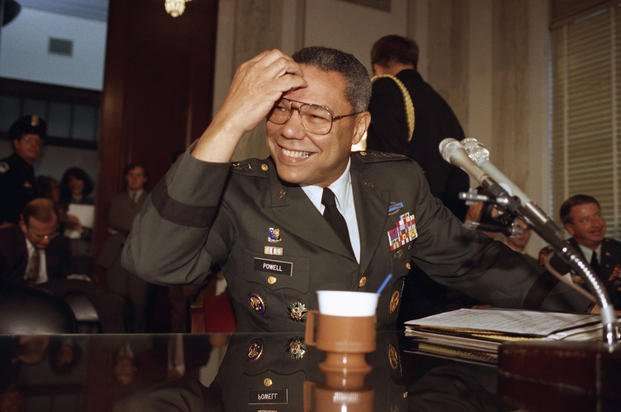 Yesterday, the United States lost a long-time civil servant and a man that has stood for decades as a voice for the more moderate facets of the Black community.

Colin Powell, the first ever African American to ever be appointed to the office of National Security Advisor, Joint Chief of Staff and then Secretary of State, passed after losing the battle with complications caused by COVID-19. He was 84 years young. Powell is survived by his three children and his wife, Alma Vivian (Johnson) Powell, whom he’s been married to and in love with since 1962.

Democratic advocate and MSNBC host Joy-Ann Reid tweeted, “General Colin Powell’s death is so shocking and heartbreaking. He had some tough moments around our wars, but was a fundamentally good and decent man and a great American we could all be proud of. I know my Caribbean-American fam certainly are. Wishing peace to his soul & family.”

Powell’s origins were humble, and he was indeed the son of immigrants. His parents came to the US from Jamaica, and Colin was raised and educated by the rich afro-caribbean and Black communities in the South Bronx. His bachelor’s degree from the City College of New York was in geology, interestingly, and he also participated heavily in ROTC programs that led to a venerated career in the US military.

Powell was made an Army second lieutenant upon graduation in June 1958, and he was a professional soldier for 35 years, during which time he served for two tours in Vietnam, held many command and staff positions and rose to the rank of four-star general. He was Commander of the US Army Forces Command in 1989.

According to various sources (CNN, The African American Registry), Powell was renowned amongst his government allies and contemporaries for his calm, measured attitude and steadfast tone. However, his name and track record might garner a slew of different reactions from whoever you ask. Not everyone was a fan of his early involvement and dedication to the Republican party during the years of Raegan and George H.W. Bush presidencies, where he established himself as an incredibly moderate-minded politician. The caution and, sometimes, hesitancy he showed towards major policy change from ending wars to instituting less police presence in neighborhoods, led much of the more “progressive” end of many communities to give Powell and his loyalties a side-eyed glance.

And, in many instances in Powell’s career as both a soldier and a politician, there were questions raised as to his ethics and honesty about certain situations relating to the brutality of war and the reasons behind it. He was of the opinion that things like defunding police and enacting drastic justice system changes in America needed to be done slowly, with consideration from both sides of the issue. It’s easy to see how that could ruffle feathers in the new age of George Floyd and Black Lives Matter.

However, despite differing opinions on policy, Colin Powell stands as an immovable monument to the ability of Black people to achieve whatever title, honor and respect they wish for. He was a Black “first” almost from the minute he stepped into office, and at one point he was a favorite to be the first Black president of America. He was a staunch defender of human rights in global conflicts, stood as the working example of “Black people are not a monolith,” and was often willing to say things his contemporaries would not.

“Sometimes, being responsible means pissing people off,” Powell was quoted saying once. He carried a simplicity in his morals and opinions that many people had no choice but to respect him for.

“General Colin Powell understood what was best in this country, and tried to bring his own life, career, and public statements in line with that ideal. Michelle and I will always look to him as an example of what America—and Americans—can and should be,” wrote former President Barack Obama, also on Twitter.

Powell’s death unfortunately raised concerns, comments and questions about the efficacy of the COVID vaccines, since he was vaccinated. But Powell’s family revealed he had multiple myeloma, a cancer of plasma cells that suppresses the body’s immune response, as well as Parkinson’s disease. Rather than cast doubt on immunization, Powell’s untimely passing may highlight the importance of herd immunity and how it can shield the most vulnerable of us, health wise.

When Hope and Prayer Fail to Comfort, We May Need to...

The Affordable Care Act: What to Know and What to Expect