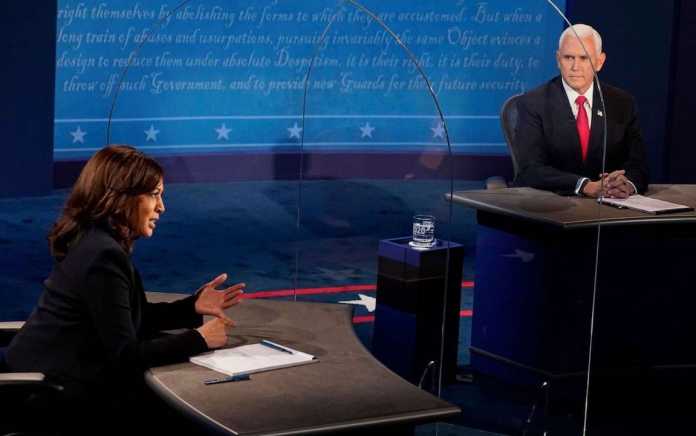 While preparing for the vice-presidential debate, I got both drunk and high. I’m sorry Ma, but I couldn’t do it sober. If this comes back on me so be it – at least it was honest. Also, how many of y’all were in the same boat?

At the beginning, I thought maybe I should drink some water, sober up and put on my serious journalist cap, but once I heard Vice President Pence’s robotic and evasive responses, I thought this was a great decision.

For those who missed the debate, here are some highlights:

The moderator was Susan Page, Washington Bureau Chief for USA Today. She kept it cute. Nothing too radical. In fact, when the candidates spoke over one another, she stayed quiet. She was completely underwhelming and passive as moderator of a debate on the lives of millions of Americans during one of the most catastrophic times of our lives. It’s cool, though.

Of course, they discussed the economy, COVID-19 protocol and handling, taxes, and even Trump’s diagnosis and updates. However, I would say out of all of the discussions, one of the most interesting was their breakdown on environmental issues.

Pence: First, I’m very proud of our record on the environment and conservation. According to all of the best estimates, our air and land are cleaner than any time ever recorded. Our water is among the cleanest in the world. And, just a little while ago our president signed the Outdoors Act, one of the largest investments in our public lands and public parks in a hundred years.

Pence’s evaluation on the environment was somewhat questionable, considering the world is literally on fire and we’ve had multiple water issues throughout the past few years. He must have forgotten the environmental injustice that started in Flint in 2014, as well as the 63 million people who consumed unsafe water from California to New York due to decades of industrial dumping.

For the latter, when the findings were released, according to reporting by Carnegie-Knight News21 – a national reporting initiative headquartered at Arizona State University’s Walter Cronkite School of Journalism and Mass Communication – “Many local water treatment plants, especially those in small, poor and minority communities, (couldn’t) afford the equipment necessary to filter out contaminants.”

Also, what is this Outdoors Act? I was confused. It seems that the Great American Outdoors Act was enacted on Aug. 5, 2020, an initiative that aims to restore our national parks. According to the National Parks Service website, “The Trump Administration worked with Congress to secure the passage of this landmark conservation legislation, which will use revenues from energy development to provide up to $1.9 billion a year for five years to provide needed maintenance for critical facilities and infrastructure in our national parks, forests, wildlife refuges, recreation areas, and American Indian schools.”

Besides these mentions, I don’t think much was determined or answered in this debate. Both candidates evaded some questions (mostly Pence) and failed to deliver anything of value to the American people, especially the Black community (and Breonna Taylor’s family). It was a completely anticlimactic debate, full of respectability politics. Anyway, until next week’s second presidential debate.

By the way, by the end of this debate I was completely sober.