Black Detroit has long had a bond with gymnastics, and as young brown-skinned tumblers continue to dominate the sport, local tumblers remain as passionate as ever. 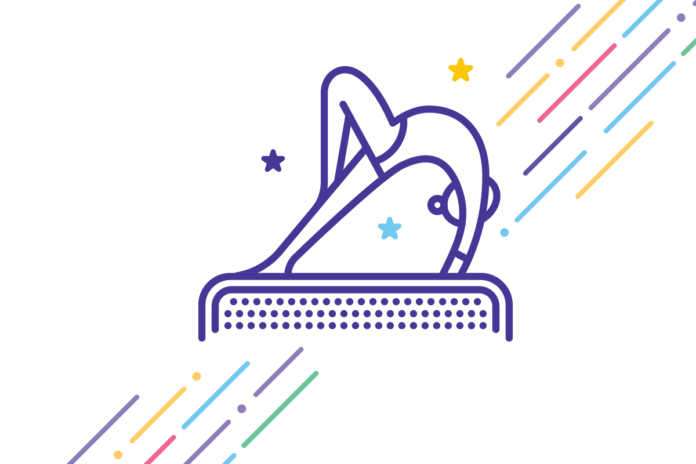 I know what it feels like to fly. Between ages 9 and 13, I have vivid memories of itchy leotards and bouncing ponytails as we, always giggling, waited for our turn on the trampoline amidst clouds of no-slip chalk and glitter-spray fumes that made my eyes burn. At the time, I didn’t realize that as a brown girl, I was incredibly lucky.

Few black kids get the opportunity to experience gymnastics as a hobby, let alone as a potential career. Quiet discrimination and structural indifference whitewashed the sport until our connection to it was unrecognizable, doubly criminal once you learn how far back our history in gymnastics stretches and how linked it is to our communities, our well-being and to our sense of self.

Back in the day, the rhythm of brown soles on blue mats was the soundtrack to places like Harlem and Washington, D.C. In Detroit, the city’s parks and recreation department offered public tumbling classes at recreation centers until 1980. Granted, there was no artistic or rhythmic gymnastics offered due to lack of fancy equipment that you’d find in the suburbs.

That meant no beams, no bars and no ribbons, which forced then-Detroit Public Schools administrator Gwen Hilliard to make long commutes so daughter Wendy could get the full gymnastic experience. “The first place I learned gymnastics was the Fisher YMCA, and it didn’t have all the equipment, so, of course, my mom took me to Southfield,” Wendy says.

“It ended up working because that was where we met Zina and Vladimir Mironov, at the Jewish community center.” The Mironovs were Olympic-level trainers fleeing the Soviet Union. After a few pricey sessions, Gwen nudged the city to hire them as head coaches for the new Detroit Metro Gymnasts program, with Wendy at the helm as captain.

“Our team made history. We had champions. We were popular even when Detroit wasn’t. We had to go out and do incredible things for ourselves because no one had done them yet,” Wendy says. Wendy – the first African American on USA Gymnastics’ rhythmic national team and a Hall of Fame inductee in 2008 – was not Detroit Metro Gymnasts’ only success story.

Wendy appreciates her mother’s devotion but knows that other parents shouldn’t have to drive as far as she did to afford their children similar opportunities. The Detroit branch of the Wendy Hilliard Gymnastics Foundation operates in the Kemeny Recreation Center on Ford Street, nestled comfortably within Detroit’s city limits.

In New York, she works with Harlem Children’s Zone to provide gym space and transportation for low-cost urban gymnastics. “I started the foundation based on my experience in Detroit, so I wanted to create the same opportunity in New York. I brought it back (to Detroit) because the history is rich, but the sport is scarce,” Wendy says.

Mary Thurman, head coach of Detroit team JC And Me Cheer and Tumbling, says she’s been coaching since 1995 and she doesn’t intend to stop until “the Lord tells me to either retire or come home.” She says, “I started out tumbling in the ‘70s and my sister was the reason. She said if I kept my grades up, she’d take me to classes at the Lahser YMCA,” Thurman says.

She founded JC And Me in 2003 after seeing her toddler mimicking the moves she was teaching to Catholic Youth Organization cheerleaders. “I kept hearing thump! thump! in my house, and he was trying to throw (a back) tuck at 3,” she says. A back tuck is when doing a backflip or handspring, you tuck your arms and knees into your chest as tightly you can, while airborne, before landing. It takes a good amount of leg power to get high enough off the ground to pull off the trick before landing.

“I had to teach him myself after that.” She formed a fierce team of competitors who’d collect medals from Iowa to Baton Rouge along the way. Thurman came along a little after Hilliard and the Detroit Metro Gymnasts, but she says she remembers how pale gymnastics was in the ‘80s. “I took classes right on the edge of the suburbs. There were two black girls and I was one of them,” Thurman says. In a nutshell: Gymnastics was not very accessible to black people.

From personal experience as a kid standing with all those Abbys and Sarahs, I often felt like the single brown crayon in a bottomless bag of white Crayolas, but I never questioned it. Head coach and owner of Skills Ville – Detroit’s oldest gymnastics team – Rohn Baker says lack of funding and economic stress in urban, majority black areas is the “white elephant in the room” when talking about sports like gymnastics.

“The last hired are the first fired in urban America and gymnastics is very pay to play,” Baker says. “If the playing field was level, we’d blow this sport out of the water just like every other.” When I spoke with Wendy, she said when Detroit’s financial woes began gymnastics was “the first thing to go.”

Money fled the city and took gymnastics with it, erasing it from the minds and the hearts of the black community like magic. She took her girls to a meet in Trinidad and was shocked by how many gymnasts of color she observed. Thurman says, “Before I started, I took my kids to Kalamazoo to tumble (and) it cost $210 monthly to train and the competition fees were ($90-plus). People can’t afford that, especially during the recession.”

Skills Ville and JC And Me consider themselves friendly rivals. Both teams have known each other for years and hold similar payment philosophies for black and minority families, keeping tuition as low as possible. Skills Ville and JC And Me have the lowest and second lowest rates for gymnastics in the state, respectively, and offer training in power tumbling in lieu of artistic gymnastics to keep prices low and avoid concerns about body image (more on that later).

“We offer other skills training like karate to offset costs and overhead expenses. When the economy was in the toilet, I took a part-time job to keep Skills Ville open. It meant that much to me to keep this sport viable in the city,” Baker says. An enormous number of rec center closings in the early 2000s left Thurman and her team with no gym to call home. Baker says his team nearly lost theirs to the Livernois renovations that sank many businesses in the area, but they held on – “by the grace of God.”

Economics is only part of the battle to reclaim tumbling. Until
recently, due to domination by athletes like Simone Biles and Gabby Douglass,
the image of a black girl gymnast is not what sprang immediately to mind.
“We’ve had problems with judges scoring black kids lower than white kids,”
Thurman says. “There’s been fines and investigations and, I swear, I almost went
to jail in Virginia because when your kids are being treated unfairly, you have
to stand up for them. We tell our students, ‘Don’t give them any extra reason
to take a point away.’ We don’t even tell them it’s about race.”

The kids at Skills Ville thankfully don’t notice anything other
than weird looks when they compete with white teams in Michigan and out of
state. But 29-year-old coach Mariah Buckner remembers a different era. “I used
to compete at Conrad’s Gym, and I’d get talked about for the color of my skin.
I’d hear coaches telling kids, ‘Oh, you better beat that N-word,’” she says.

Kayla Gibson, 12 years old, still doesn’t see
many brown faces when she competes, but she says it doesn’t bother her. She
wants to be a trailblazer like her idol Gabby Douglass. Kayla says, “It doesn’t
scare me. I feel like I’m accomplishing something for black people.”

The sign under the welcome banner at Skills Ville proclaims that the gym is a “DISS FREE ZONE,” stressing just how important positive attitudes and ethical sportsmanship are to gymnastics. When they aren’t competing, they attend church brunches, volunteer at Gleaners, tutor, raise funds for teammates who can’t afford to travel out of state, hold prayer meetings after practice, tour black colleges, and host summer camps and study sessions.

For the Wendy Hilliard Foundation, Skills Ville and JC And Me, the best gymnasts are born of happy, healthy, well-rounded kids. “I used gymnastics as an escape from a stressful home life. A lot of our kids are in the same position,” Buckner says. All three teams (including JC’s Illinois sister team Extreme Air) share similar cornerstones of health, community involvement, academic success and body positivity.

“We tell our kids it’s better to be healthy and strong than thin and weak, which is partly why we don’t do artistic gym,” Thurman says. “God gives you the body type you have. Not a lot of black gymnasts are going to be a size 3-4, and that’s perfectly fine.” Power tumbling is just a little more forgiving to the brown girl’s curves and the brown boy’s insecurity.

“Some boys are scared off a little by the uniforms and whatnot, but they love tumbling and flipping on mattresses and yards just like the girls,” Baker says. “They’re talented, and once they start, they love it. There’s never any hate or insults. They see how strong you have to be to do this stuff.”

Detroit’s minority teams communicate with Tennessee teams who connect with Illinois teams and so on. When kids are struggling, whole regions come together to host skill clinics and uplift rivals and friends alike.

“Even if we don’t look alike, it doesn’t matter because everyone’s different and we still make friends all over when we compete,” 9-year-old Piper Wooddeger says. Reclaiming gymnastics isn’t only about winning the heaviest medals. It’s about reintegrating the sport back into the community – and the community back into the sport. 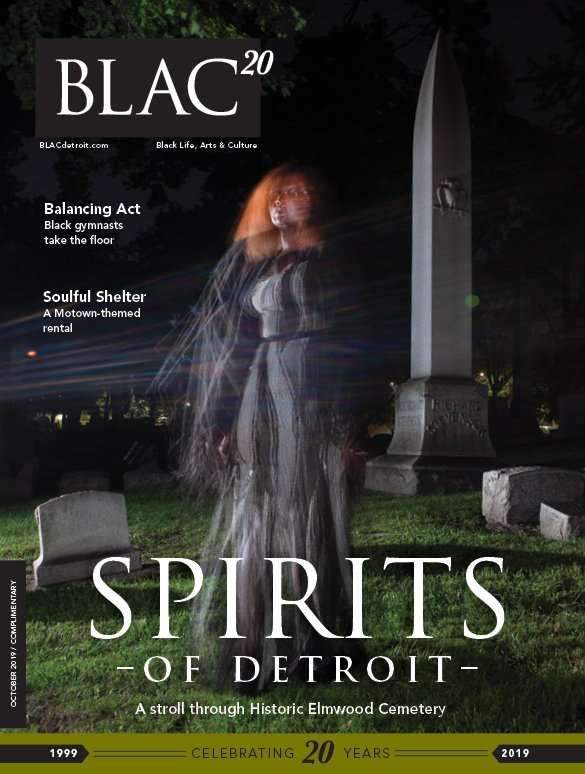