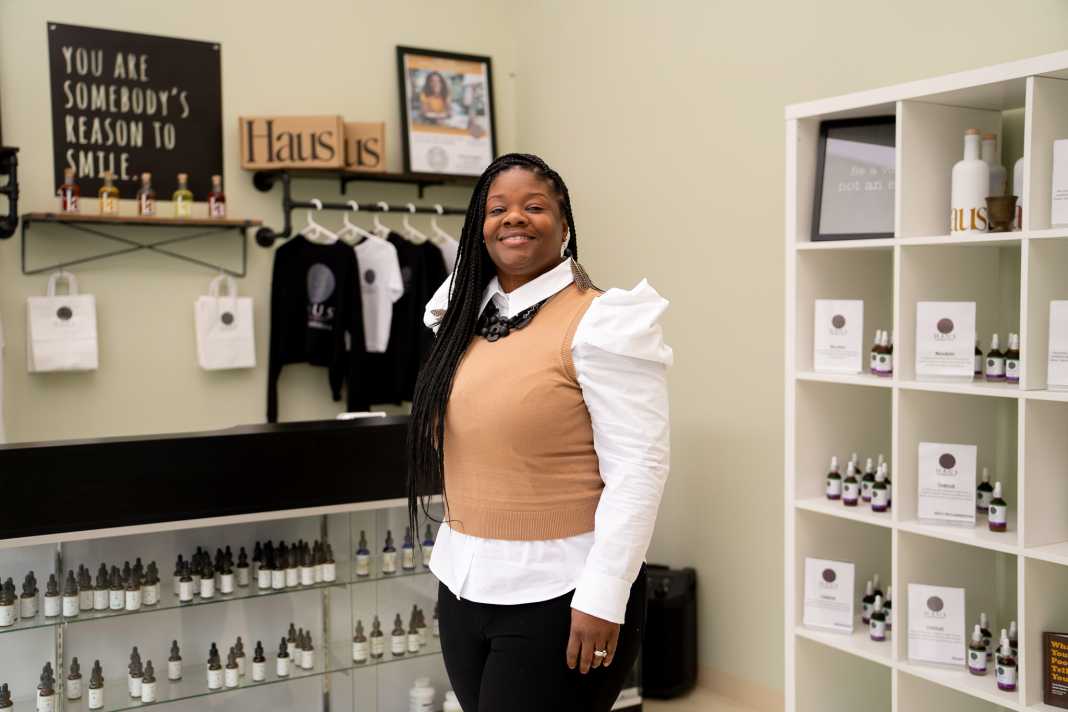 Built 104 years ago in Northwest Detroit’s Old Redford district and renovated in the depths of the pandemic, The Obama Building is already emerging as a hub for the city’s equitable economic recovery, driven by black women-owned businesses.

Redeveloped for $3.6 million by The Platform, a real estate development company dedicated to helping rebuild the City of Detroit, the nearly 13,000-square-foot space includes eight street-level commercial storefronts, six of which are occupied, and four residential loft units set at affordable rates. All residential units, priced at 60%-75% area medium income (AMI), were leased upon the building’s opening. Several businesses in the space are operated by lifelong locals, the outcome of a planning effort that engaged community members and civic leaders who form part of a Neighborhood Advisory Council (NAC) to help identify potential retail tenants, with precedence given to health and wellness focused businesses.

The effort to build a NAC, which was not required by the City because the project’s cost did not trigger the city’s Community Benefits Ordinance, was led by The Platform. The NAC provided more than just resources to a neighborhood that has been historically marginalized.

“It puts power in the hands of the community leaders, business owners, and residents who have strived to improve this neighborhood long before The Platform renovated this building,” said Myles Hamby, a senior development manager at Detroit-based developer. “I meet with the NAC monthly to ensure that we create a solid tenant mix that best serves the building and the neighborhood.”

Moving forward, the NAC will decide how any excess revenue from the building is distributed for community-facing activities.

Dr. Karla Mitchell, founder and CEO of CLASS (Changing Lives and Staying Sober) and Haus of Healthy Living, runs both organizations out of a pair of storefronts at The Obama. “Visibility has always been key with my work,” she said, adding that being able to anchor herself in the community was key to her decision to set up shop there. “People can access me from a bus line, from driving by and parking, and from just walking past.”

The Obama is named for local artist Chazz Miller’s mural of Michelle and Barack Obama’s “First Dance,” an art installation that once hung on the building’s facade—the work is now on display in an onsite art gallery—and resulted from a public-private partnership that includes the City of Detroit, Invest Detroit, Michigan Economic Development Corporation, Horizon Bank and the Fisher Foundation.

For over a century, the building was an anchor in the neighborhood, originally opening in 1917 as a Peoples State Bank branch. Old Redford, which boasts a historic downtown surrounded by early 1900s single-family homes, has seen a series of booms and busts. After the bank’s closure in 1931 during the Great Depression, and the building’s short-lived use as a Stein’s Department Store, the structure became an eyesore during its nearly decade-long vacancy.

“We didn’t want our kids to think that was acceptable,” George says. “A neighborhood should be safe, secure and nurturing.”

Those goals are top of mind, too, for Dawana Cooper, owner of DawanaFit, who was a personal trainer at a local gym before the start of the pandemic. Though she could no longer lead in-person group classes or one-on-one training sessions during lockdowns, she was committed to continue her life’s mission of “bringing health and fitness back into the community, especially for women.”

Though Cooper is a veteran who was trained to deal with tough challenges, the pandemic brought new pressures that threatened to compound uncertainties among first-time business owners like her. But The Obama was designed to help smooth the way, particularly for Black women entrepreneurs who typically face disproportionate barriers to entry, whether from inadequate access to capital, mentorship or other resources. In fact, the retail spaces in The Obama were made available with fully finished conditions for this very reason. Going beyond traditional white-boxing, they featured pre-installed HVAC and electrical, to help lower the barriers of opening a small business.

Dr. Mitchell says the NAC has proved critical to getting her set up at The Obama, with organizers being “able to vet and screen people with viable business opportunities who are wanting to begin anew … and it’s giving the Old Redford neighborhood a footprint of shoppers.”

For her part, Cooper began laying the groundwork years ago but finally managed to launch her own business only when The Obama came along. After returning to Detroit following her military service, she began drawing up a business plan with the help of Motor City Match, an initiative of Mayor Mike Duggan’s run by the Detroit Economic Growth Corporation that provides guidance and grant funding to new and expanding businesses and connecting prospective business owners with landlords. Earlier this year, Motor City Match contacted Cooper to let her know The Obama was seeking a fitness expert as a retail tenant. She amassed start-up capital through a series of crowdfunding efforts and now plans to begin offering in-person and virtual group classes along with one-on-one training at her new gym in the complex.

These community-driven planning efforts helped set Mitchell and Cooper up for success, and they are now among the five Black women business owners at The Obama.

Mother-son duo Annis and Rickey Glasper are the co-owners of Nissy’s Fabulous Fashion and Sages Wisdom. Annis, a former banker and creative at heart who quit her job in December 2019 to pursue her “side hustle” full time, saw a surge in her online retail sales during the COVID-19 lockdown. The uptick was so notable that in the fall of 2021 she decided to partner with her son Rickey, “The Shoe Guru,” to open a joint storefront at The Obama.

He is just as excited to embark on this venture as his mother. “My biggest role model would be my mom,” he says. “She’s been doing business stuff her whole life, and seeing her business grow is inspiring.”

Annis was familiar with credit score criteria and other banking requirements due to her career in financial services, but she did not qualify for business loans. “You need to have a banker to go to bat for you,” Annis said. Thankfully, between her online sales and her and Rickey’s joint savings, they were able to pool together enough cash to secure a storefront at The Obama.

They visualize their boutique becoming “the spot” for locals to find a curated collection of items ranging from jewelry to books, receive expert shoe advice, and serve as a hub for local artists, authors, and creatives.

A theme that has remained constant among all the businesses at The Obama is tenacity in the face of adversities—a trait that comes in handy as they look to build businesses in the wake of the pandemic.

“The road as a business owner has been challenging, and I’m learning the ropes of what to do and what not to do,” said Deja Smith, owner of Dej’s Beauty Room, but she’s getting the hang of it. “I’ve got to learn to let things happen when they do. If something doesn’t happen right then and there, I have to stop entering into crisis mode where I go, ‘What am I going to do now?’”

The daughter of a longtime entrepreneurial father, Smith also credited her hard work and savings from operating initially out of her basement with helping position her to open her salon at The Obama, for around $15,000 in start-up costs.

Marcia Johnson, owner of Marcia Johnson Photography, another retail tenant at The Obama, has a similar story. After the birth of her son in 2018, she found herself constantly capturing all his moments as a newborn and infant. Later, while playing with an old camera she found in her parents’ home, Johnson decided turn her hobby into a career.

She found a photography mentor in one of her work colleagues and eventually began hosting photoshoots in a building owned by her family. Johnson became an immediate sensation and was booked months out from the start. Working cost-free out of a space owned by her brother helped her build up savings for the buildout of her storefront at The Obama, where she is excited to have the opportunity to take on more clients.

As an expert in family photography, Johnson is perhaps especially attuned to the ways support networks can develop across generations to help set people on the path toward running their own businesses. She recalls spending most of her childhood in a single-family, low-income household led by her mother.

“[She] never complained and pushed us to do what we love, never doubting in our wildest dreams,” Johnson said.

The John Shippen Makes a Debut