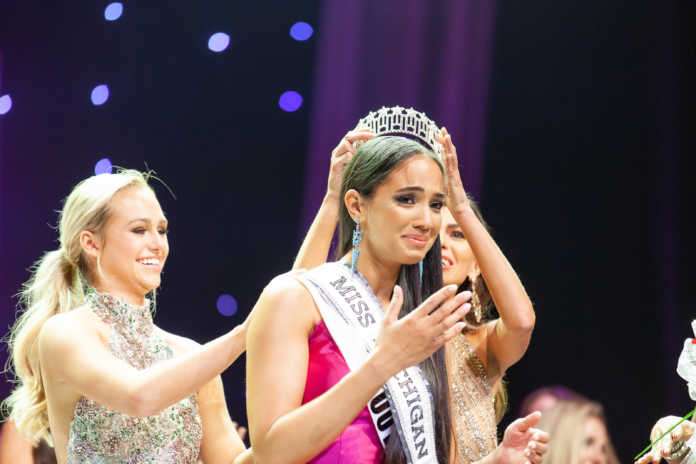 Chanel Johnson hit a homerun her first time up to bat – and she did it with a poise, grace and a perfectly beat face. Approaching the cutoff age, the Southfield native competed for Miss Michigan USA in September, her first pageant competition, and won.

“I was very surprised; I was definitely not expecting to win my first pageant. I went in thinking, ‘OK, this year, I’m going to learn everything I need so that next year, maybe I can win.’ But, I guess I won’t get that opportunity,” she says, laughing.

Johnson says she’d been wanting to compete for a while and went for it this year, with a promise to herself that she wouldn’t be just “a pageant girl.” She’s a probation officer for Oakland County, graduating from Wayne State University with a bachelor’s in criminal justice in 2017.

As she delves into her Miss Michigan duties and prepares for the Miss USA pageant in April, Johnson says it’ll be her versatility and ability to connect and empathize with people that’ll guide her and help her to stand out in the crowd of beauties.

She thinks that next year will see a record number of black women competing for the national title. “It makes me feel like, OK, we are meant to be here as well, and it definitely is a move in the right direction as far as our country and inclusivity, and just being reminded that black women are eligible for these opportunities as well. I’m going to have some of my sisters there with me and we’ll be doing our Miss USA thing.”

Johnson says, “They want
you to be in shape, and they want your overall health to look good. So, that’s
one of the main things I’m working on, because I like cookies and I love fried
chicken.” And of course, there’s the hair, the makeup, the all-important
outfits, and – cue the ominous music – the interview questions. Johnson says, “I’m
taking everything up about 38 notches. So, things are about to get real, real
fast.”

Beauty pageants have been a point of contention for feminist groups since the women’s lib movement, and, especially now, in the midst of the modern-day #MeToo and #TimesUp movements, parading young (only young), beautiful (only beautiful) women on stage to be judged feels, to some … #problematic.

Still, Johnson contends that her experience thus far has been a beneficial one during which she’s made friends, gained confidence and learned lessons. “I think that pageants are one of the most positive things that a young woman can get into if she’s looking to build her confidence,” Johnson says. “If she’s looking to surround herself with positive young ladies who are doing things within their communities, it’s just a really easy way to better yourself and become a better version of yourself.”

Root for our Miss Michigan Chanel Johnson when she competes in the Miss USA pageant in April.