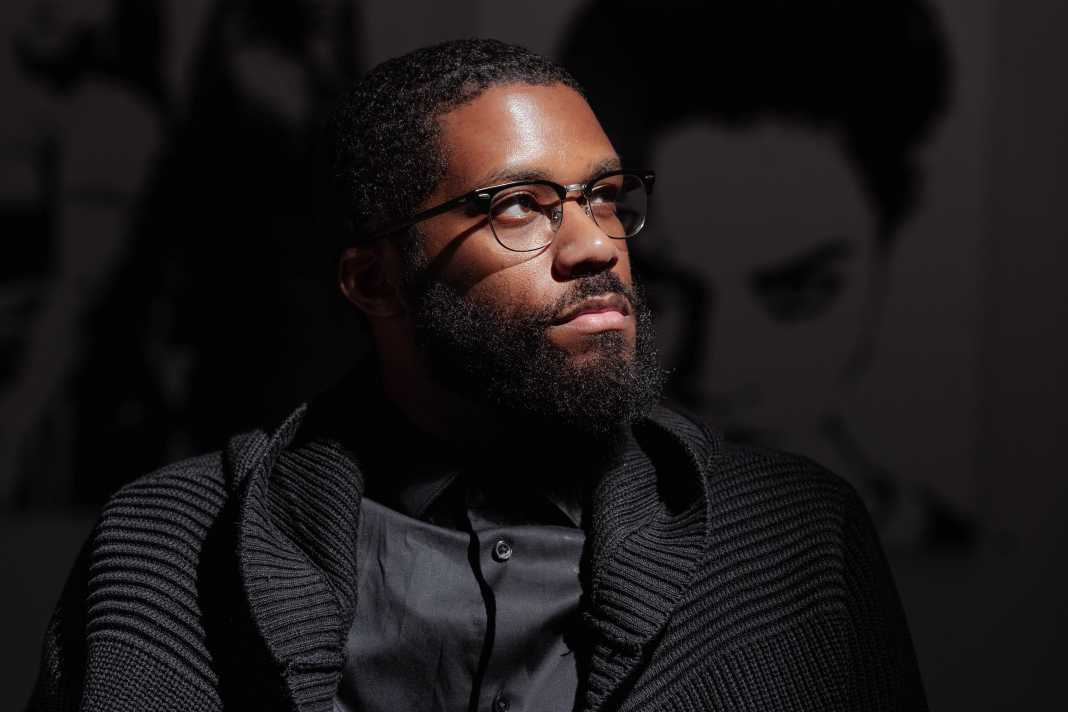 When asked if his art follows a particular path, 33-year-old impassioned artist, self taught painter and curator, Jonathan Harris, responds with calm, yet firm declaration that he’s painting the times. While focusing on the creation of pieces that reflect evolving societal conversations, Harris also pridefully captures the essence of black love, culture and the everyday life experiences that tell our enthralling stories.

As the subject of Critical Race Theory took centerstage this year initiating nationwide debate as to whether or not students across grade levels should be exposed to the layered matter, Harris took his brush to canvas.

What is captivating about CRT is Harris’ crafted doses of enigma for interpreters to reign free, yet strategic juxtaposition. While he does not designate a flag specifically, the person who is painting wears a red shirt with hints of blue and several small white stars as a design on its sleeve. True to his artistic integrity, Harris has welcomed the diverse response and perspectives on CRT, yet, what he makes very clear to anyone when he speaks on his provocative piece, is that the blonde-haired person in the painting does represent White America.

Theory — an actual theory and academic framework primarily taught and at the graduate-level — became the target of widespread dispute, criticism and battleground for parents, educators, board members and school districts throughout the country. Critical Race Theory contends that racism is structural — that is, that racism is built into American culture and entrenched in American institutions.

Resulting from three weeks of Harris’ mindful detailing, CRT went viral, sending shockwaves throughout Facebook and beyond as his original post which was shared swiftly by the page “The Other 98%”, has exceeded more than 11,000 shares since going live in November.

“It has made me feel good in a way that people are taking the time to assess my art,” says Harris. “Thoughts of people who have not agreed are important too, because I want to be able to understand why people think in their way,” he continues.

Striking a nerve with some, eliciting grand applause and appreciation by others, with profound intrigue of the thousands whose eyes have now set on CRT, Harris sends his message on where he envisions the world heading if the topic of Critical Race Theory becomes a banned aspect of education.

“It’s like a beast that’s never full,” Harris references to White America and all of those who dispute the teachings of Critical Race Theory and real history that delivers the complete and accurate narrative of American history, black history and beyond.

“Eventually, we will get here. Erasing Malcolm X, MLK, Harriet Tubman and all of our changemakers. It’s a dialogue. It’s a think piece and now I guess, it’s a talk piece because people are definitely talking,” Harris explains.

As with all of his past work and those he will execute in the future, Harris aims to deliver thought provoking, conscious, beautiful, and timeless artwork.

Just as the road depicted in CRT represents the arduous and resilient journey traveled by black Americans throughout history, Harris presses forward as a tenacious artist hoping to leave a legacy through his work, daily principles and action in carving further spaces for fellow artists. Understanding the critical self belief that was required to conquer his own dreams when he took on his art full force in 2018, Harris gives room figuratively and literally to others as a curator of shows throughout Detroit and surrounding areas. At his diverse galleries, which host dozens of local artists,  Harris makes each presenter a focal point to ensure their work and own messages are rightfully seen, heard and respected.

“ I want to give other artists hope because I know that hope at certain times as a working artist can inspire something much-needed inside of you.

Echoing a favored quote, “The power of respect is to never disrespect,” Harris proudly delivers art to challenge, expose and invigorate people into extensive discussions and healthy debates.

“That I stood for something. That I was always trying to give my people a voice and opportunity. That’s how I want to be remembered.”

Harris has events on the horizon where artists and art enthusiasts are able to unite, engage and garner support through evolving exposure. His original Critical race theory painting has already been sold. Prints including some limited editions are currently available.

For more on Jonathan Harris, visit:

Detroit Lions Coach Jim Caldwell: ‘On to the Super Bowl’