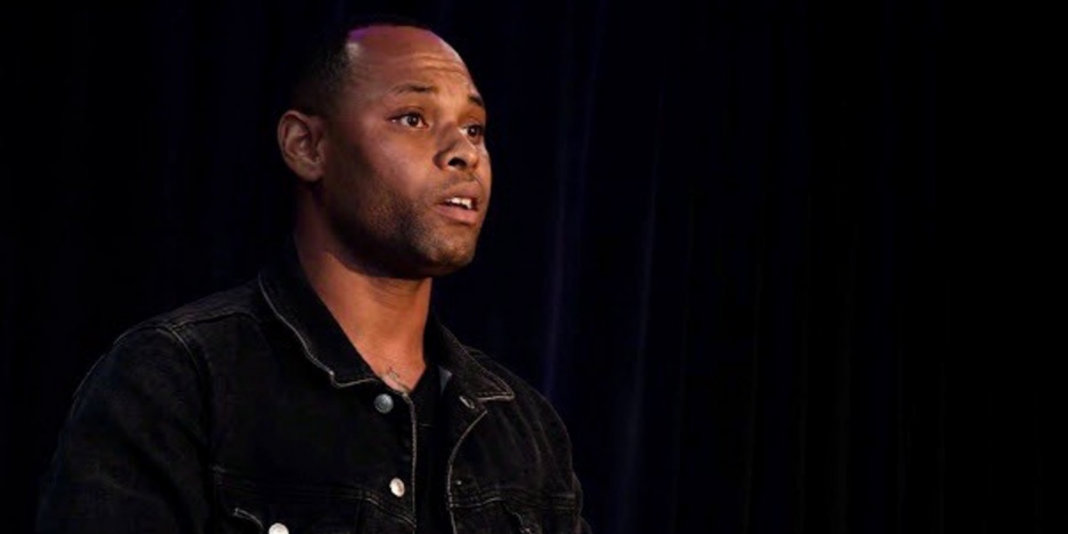 The military is better thanks to Detroit-native Demetrius Thigpen. The decorated Marine has made a name for himself through his leadership in service, public speaking, authorship, and podcasting. He is determined to change the trajectory of his life and those of others to whom he’s of service.

BLAC: Can you talk about your upbringing on the Eastside of Detroit?

Demetrius: I was born in Detroit, Michigan in the red zone and raised by a single mother.

I tell people a single mother raised me because it’s hard being a single parent. Her raising me alone is a testament to her strength. My mother graduated at the top of her classes in school, but a significant setback for us was my father being an alcoholic.

When you have a family member who’s an alcoholic, they come in and out of your life. One minute they’re clean, the next minute they’re not, and this cycle repeats itself. My father was a recurring character in my life’s story.

When I was eight years old, my dad sat me down and told me that I was the man of the house. From then on, I only saw my dad sparingly throughout the next 15 years, and I haven’t seen my father since I started having kids.

BLAC: How did your family react to you wanting to join the military, especially since the media plays a role in the unsettling nature of how we view being in the service?

Demetrius: My family looked at me like I was crazy. Nobody believed in me or thought it was a good idea to join the military. When I entered the military, they thought I would get blown up, suffer PTSD, and a host of other ailments. I can even remember my neighbors trying to rip up my military papers.

I didn’t want to work a regular job or go to college, so the military was the best opportunity for me, given the circumstances I was in at that time. When I showed up at the Marine Corps, my family cried and told my recruiter that I better come back in one piece. Ultimately, this decision ended up being one of the best I’ve made in my life.

BLAC: How were your first years in the military?

Demetrius: I almost didn’t survive my first few years in the military.

The easiest part of joining the military was the physical nature. I have been playing sports as a child. Even the yelling and screaming from ranking members didn’t bother me because of my experiences in Detroit.

The hardest part of joining the military was transitioning from being on your own to having someone else tell you what to do. If I failed boot camp, I was going back to Detroit, whereas everyone else I was around had a backup plan.

I tell all young recruiters that, if you survive the transition, you can survive anything.

BLAC: In the military, how did you handle being around individuals who weren’t cut from the same cloth as you?

Demetrius: Joining the military allowed me to see different people from different walks of life. Initially, I couldn’t stand people in the military who didn’t take their job seriously or didn’t come from my environment. But as I moved into leadership positions, I started to become more empathetic toward people. It took a while, but I eventually turned that angst into comradery.

BLAC: Can you tell us how you became a published author along with how you started your two podcasts: “Extraordinary Thoughts for the Ordinary Mind” and “The Not So Meritorious Podcast”?

Demetrius: I was booked to speak at a Women’s Empowerment Conference featuring Lisa Nichols. While showing my brother the flier, he told me that I had to create a book and podcast to establish authority in my field. After that conversation, I began writing my manuscript for my book, “The Extraordinary Thought From an Ordinary Mind” in March of 2020 and released it in July of 2020.

When I started the podcast “Extraordinary Thoughts for the Ordinary Mind,” I knew I wanted my prime focus to be mental health which is such a huge topic in the military. Many people in the military deal with mental health issues, but we refuse to talk about it because we don’t want to seem weak or incapable of handling these issues. But with the podcast, I realized I was suffering in silence. I would go home and drink until I passed out on my patio because I was trying to numb my pain. I didn’t know much about creating a podcast, but I knew I had to do it.

BLAC: What’s next for you?

Demetrius: This year is personal for me because 2021 was a year of growing pains. I couldn’t believe that I made it through last year because I was so depressed and full of hate. Now, I’m ready to take my life to the next level and become more committed to everything I’m currently doing.

In 2022, I plan to release more merchandise, and I’m also working on my next book.

Detroit Speaks steps up to give kids in the city a...