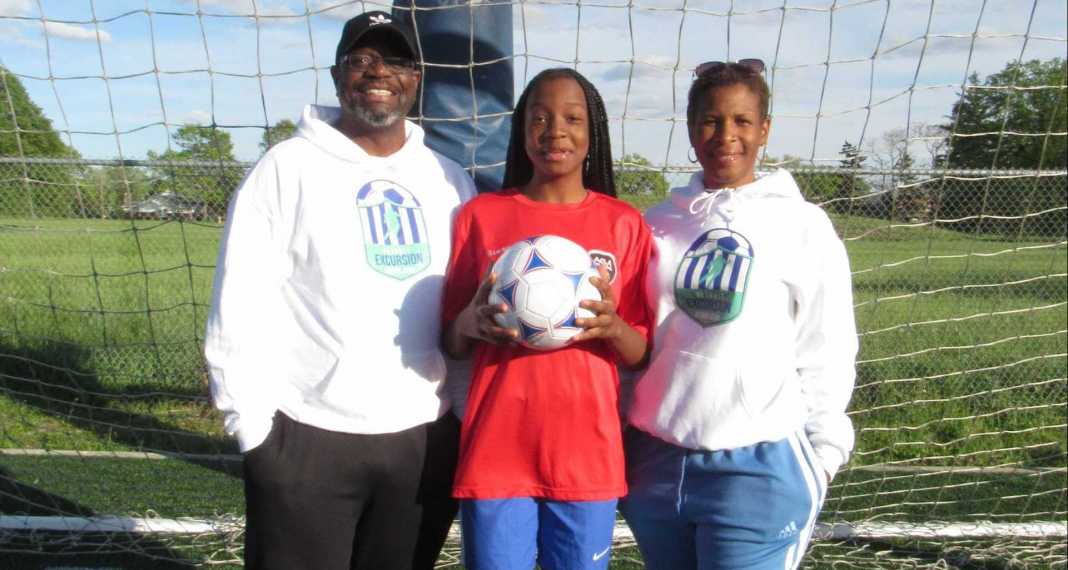 About two decades ago, The Institute for Diversity and Ethics in Sports gave the MLS an “F” for gender representation in its 2003 Racial and Gender report card. Women were less than 25 percent in the entire sport: from players up to general managers. This was the first failing grade ever given since the report card was published.

To compare that to the latest US census, roughly 42 percent of Americans belong to a minority group, and about half of the population are women. MLS is less than halfway there to fully representing minorities and women among its ranks.

With a daughter and a son who grew up to play competitive soccer, Warren Galloway, Jr. and Tresa Galloway are trying to change the face of the sport. Born out of their sacrifices as soccer parents, they are now giving young Detroit girls a fair chance.

Backed by a fully African American board of directors, Detroit Excursion Futbol Club wants to develop and keep young, talented soccer players who can play for their home city. While the club does not aim to get girls into professional soccer, its coaches will surely train them to excel in competitive play.

BLAC: Warren, can you tell us, for those who aren’t familiar, about the soccer club?

Warren: Detroit Excursion Futbol Club was founded by myself and my wife, Tresa Galloway, to provide competitive soccer for girls within the boundaries of the city of Detroit. For many years, we watched the recreational league of the city thrive.

But if you wanted to play competitive soccer, you, unfortunately, had limited options. The most common option was to leave Detroit and play for a suburban team.

That was almost seven years ago. Things really haven’t changed. We felt we needed to bring a competitive soccer club to the city of Detroit, so that talent doesn’t have to leave Detroit to play a higher level of soccer.

We are looking forward to officially launching with the tryouts on June 11 at Chandler Park for girls ages five to ten years old. We want to train them and get them into competitive soccer.

BLAC: You had mentioned that athletes who wanted to play professionally had to go out to the suburbs. It seems to parallel some of the issues that we’ve had in retaining talent. How important was that in Detroit Excursion Futbol Club’s foundation?

Warren: We see Detroit Excursion FC as an effort to retain talent within Detroit. All this awesome talent we’re having, we have in the city of Detroit, we don’t want to lose it. We want to retain it, so Detroiters can be proud of not only the academic success of our girls, but the sports success of our youth.

Our personal experience with our daughter and son triggered us to start this club. We had to leave for the suburbs because there was no other viable option for us at the time. Our daughter played recreational soccer with the Eagle Sports at Balduck Park for two years. One of the coaches noticed her skill, and she was referred to the Eastside Football Club based in Grosse Pointe. Soon, our son also played for the same club.

Also, kids who played recreational soccer for two or three years would end up transitioning to another sport because there are no other opportunities within the city.

We want to retain those talents and grow them in the city. At the end of the day, competitive soccer will provide academic opportunities for our girls. If they play well on a travel team level or a competitive level, they’ll have the potential for college scholarships.

BLAC: Had you had any experience with soccer before your kids played?

Warren: My wife and I were driven solely by the success that our daughter and son had in the sport. With us being active parents with the clubs, we are integrated into the sport, but, prior to them playing, we did not have experience with sport.

Now, we are a hundred percent soccer parents.

BLAC: The club is part of a partnership with the Chandler Park Conservancy. How did that partnership start?

Warren: Alex Allen, the Chandler Park Conservancy president and chief executive officer, and I have a mutual friend. This friend knew that my wife and I were looking for a home field for the Detroit Excursion Futbol Club. He introduced us.

The conservancy just had a successful launch of a lacrosse program, and our soccer club ended up being the perfect next project. They wanted to bring another unique sport to Detroit that youth can take advantage of.

BLAC: Reading about the program, it seems that it’s a little bit more than soccer. It’s also about lifestyle.

Warren: Absolutely. We’re taking a holistic approach. This is not just soccer. This is changing the face of the game.

Not only do we want to add more African Americans in the ranks of the soccer players, but we’re also training referees. We have eight adults going through referee training, and four of them have received their referee badges. We also have two licensed coaches, and are training three more.

The parents and guardians of the youth will be engaged in all our activities. It will be different to most travel teams as most of them are money driven.

It’ll be expensive, but we will work together to keep the costs low through grant writing, sponsorship, and fundraising events, which the parents and the guardians are gonna be an active part of.

We don’t want this club to be just a club. We want it to be a family: the youth, the parents, the community, the conservancy, all of them. All of these people in the organizations who have a vested interest will say that this is their soccer family.

BLAC: Can you tell us more about your efforts to bring more African Americans into soccer?

Warren: The club is driven solely by passion to change the narrative in the city of Detroit. One of our coaches, who is also one of our board members, has been coaching soccer for 25 years. Yet, he’s only coached against one other licensed Black coach. One.

BLAC: For those who want to get involved with soccer, what advice would you give?

Warren: Recreational soccer is always a good foot in the door. Joining the Detroit Eagle Sports Club, Detroit PAL and other neighborhood clubs is a good first step into the sport.

If a child is seriously interested in pursuing this sport, they should definitely look at a travel team for their growth.

For girls who don’t want to start with the recreational league, Detroit Excursion Futbol Club is going to start an academy for players who quite don’t have the technical skills yet for a travel team. They can learn how to become great soccer players. We will develop their technical skills, so they can move up to the travel team portion of our club.

Our academy can also be a first step for girls who want to get involved with soccer.

BLAC: And if someone was interested in your June 11, 2022 tryouts, what would be the next steps for them?

Warren: They can visit our website at detroitexcursionfc.com for pre-registration, or they can show up at the tryouts on Saturday, June 11th at the Chandler Park.

The tryouts are open to girls ages five to ten years old. The times for the different age groups are listed on the website.

We’re excited about the first season. We are anticipating about 50 girls for the first year, and grow from there. As the club continues to grow, we will participate in more competitive leads.

We would travel not only in the metropolitan Detroit area, but around the state and outside the state. I think we’re, this is gonna be the beginning of something special.

Is this 17-year-old Cass Tech senior Detroit’s next Olympian?