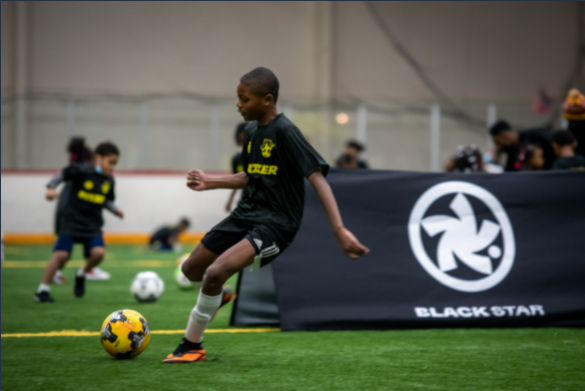 Kids from all backgrounds ran drills, scrimmages and training modules with the assistance of their mentors and City FC coaches for the purpose of immersing them into the game. Sparking an interest in soccer for Michigan children — especially black youth — is a thriving goal for the organization.

Detroit City FC is the current pro soccer team in Detroit. It’s not terribly shocking if you weren’t aware. Soccer or futbol, depending on where in the world it’s being played, watched or celebrated, differs quite significantly in popularity, experience and exposure. America, although plentiful in leagues on every level, seemingly lags behind in interest and overall education of the sport. With a keener focus on black communities, opportunities to be vested in the game are often dismal.

“Sports our community doesn’t consider viable are typically just programs we haven’t had access to,” says Nick Bibbs, Director of Coaching for The SWAG soccer program in Philadelphia which serves a similar mission as Black Star.

Bibbs played soccer for nine years in college and eventually, internationally for the Swedish team before being scouted by the St. Louis FC team. Developing a grassroots initiative in every inner city and majority Black community is his passion and dream; one he sees as achievable in the next few years if interest and knowledge of soccer keep increasing at a steady pace in the United States.

“The 2026 World Cup is set to be held in America, and when the Olympics take place in Los Angeles, a lot of little Black kids will get exposure to soccer they’ve never had before. All it takes is an ember, and seeing people be stars who look like you helps ignite it,” he says.

The clinic took place  the last weekend in October  in three phases. The first was an evening session on Friday for just boys; the second — a mixed-gender clinic on Saturday, and Sunday the event concluded with even more excitement with the Black Star Elite showcase, where high school and higher-level players had the opportunity to showcase their skills for recruiters, coaches and professional players.

Shack Reese, a 17-year old soccer player from Ypsilanti, says he’s long used to being one of the only Black soccer players in his general region, and he’s excited to be part of anything that creates a more inclusive environment for young players of his  kind who did not have the exposure growing up.

“I got one of my nephews into soccer, but none of my other Black friends are into it. I hang out with the white players and we’re cool, but it’s not the same as having other Black guys to relate to. I wish I had something like this when I was younger. I probably would have gotten in sooner,” Reese says.

Reese played in the Black Star Elite showcase Sunday, and hopes his skills enticed a few more offers from team scouts to roll in over the next couple of weeks.

“If I got the chance to play for an international team I’d love it. But I want to play for an American team so I can be the one helping soccer take off here and with Black kids,” Reese says.

Many black boys and girls gravitate towards American football and basketball as sports of interest for various reasons, usually because those are most available in their neighborhoods and communities. A conditioning to see the NFL and the NBA as the best routes sportswise for us to achieve fame and notoriety continually reiterates.

Black Star initiative Director, Patrick Rose says that’s one of the misconceptions about sports and soccer the Black Star Initiative works to combat in the minds of young Black kids.

“Aside from accessibility and getting rid of that pay-to-play model, the biggest thing about getting our kids into soccer is relating it to things they’re already familiar with while also introducing something new and intriguing. For instance, the big draw in basketball is tricks–dunking, faking people out, doing things that get you put on the headlines. You can do a lot of the same things in soccer,” Rose says.

The Black Star initiative coaching clinics are open to all ages. Registration for the Detroit clinics are now closed, but keep an eye out on the website, www.blackstarsoccer.com, for future dates and events.