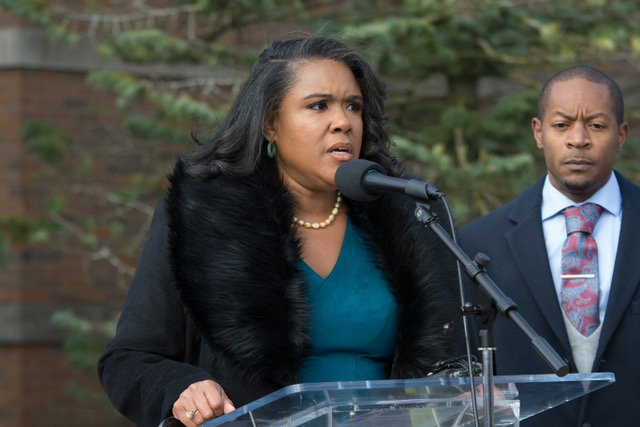 Dr. Martin Luther King, Jr. is responsible for a significant paradigm shift in the United States that led to the 1964 Civil Rights Act, which prohibited discrimination on the basis of race, color, religion, and national origin. This brought about equality for all.

However, the fight for justice and against conscious bias still plagues this country some 58 years later. The reality is progress has slowed down. The state of women’s rights and civil rights for Black Americans face attempts of being rolled back. And this is part of the reason why Atty. Dionne Webster-Cox is doing her part in lawyering and advocating to keep the Civil Rights Movement alive in Michigan.

You might see Webster-Cox invoked into a call for action against injustice at any time. From speaking out against a 10-year-old Detroit boy traumatized by the Pittsfield Police when they handcuffed him and drew a gun on him, to arguing for freedoms garnered under civil rights protection laws for her clients in courtrooms is what Webster-Cox does.

Dionne E. Webster-Cox practices law at her firm, the Webster Law Office, PLLC with headquarters in Southfield, Michigan, for more than 15 years. At the onset of her career, she worked at one of Detroit’s leading corporate healthcare insurance companies, Blue Cross, for seven years.

But today, Webster-Cox is finding herself doing the most important work of her career. She is changing the pulse of America on race relations and discrimination. Amidst increased racial reckoning and the #MeToo movement, she finds herself on the front line of social justice and civil rights advocacy in Metro Detroit. The Webster Law Office prides itself on fighting for those wronged,hurt, harmed, and endangered in various circumstances.

Webster-Cox uplifts and supports the rights of those wronged by systematic racism and inequalities. Civil rights litigation enables Atty. Webster-Cox to challenge local and state municipalities and biased corporate practices that negatively impact all people, especially marginalized communities who experience violations of their constitutional rights.

In addition, Webster-Cox identifies the long-term traumatic effect of these issues on her clients. She has appeared in various local and national news outlets about her cases. Her goal is to identify the problem and minimize the adverse effects.

A large part of her office handles civil and criminal cases where she focuses on police misconduct, sexual discrimination, workplace discrimination, and other unjust wrongs that her clients face.

Even the work surrounding diversity, equity, and inclusion today is not new to Webster-Cox. However, she argues that these issues are systemic to all aspects of life for the historically disenfranchised, specifically Black people, and women.

“My job is to confront the prejudice of the perpetrators, often a bridge of implicit or conscious biases, causing irreparable harm and damage to our clients,” she says.

Currently, Webster-Cox is working on a case of alleged wrongful termination of two workers  who blew the whistle on sexual assaults against inmates and rampant drug distribution at the Women’s Huron Valley Correctional Facility amid a pandemic.

In another case, she tries to unveil the sexual assaults against women following surgery when thehe hospital failed to stop the alleged perpetrator.

Webster-Cox is also fighting for a 70-year-old grandmother and her grandchild. Detroit Police  stormed into her house, in error, looking for a murder suspect. The police, however, allegedly failed to provide a search warrant nor found the suspect at the grandmother’s home.

Her law office also represents a family overwhelmed with the challenges of raising a child with down-syndrome. The family contacted the Webster Law Office when they learned about a physical altercation between their child and  his teacher, the one  person the child trusted outside of his own home. Webster-Cox says she is a mother and empathizes with the family’s pain and frustration.

When asked what it is like to fight for justice and civil rights, Webster-Cox says that she wants people to be fair according to the rules of fairness and justice for all.

“Ruth Ginsburg believed that women belong in all places where decisions are being made,” Webster-Cox says.

Justice Ruth Ginsburg is often applauded for sharing stories of fighting for motherhood and living through discrimination against working women and mothers.

“I live by Martin Luther King’s mantra ingrained in my fabric. A fight for justice anywhere is a fight for injustice everywhere,” Webster-Cox declares.

Five Detroit artists to watch out for

Restoring Dignity to the Homeless