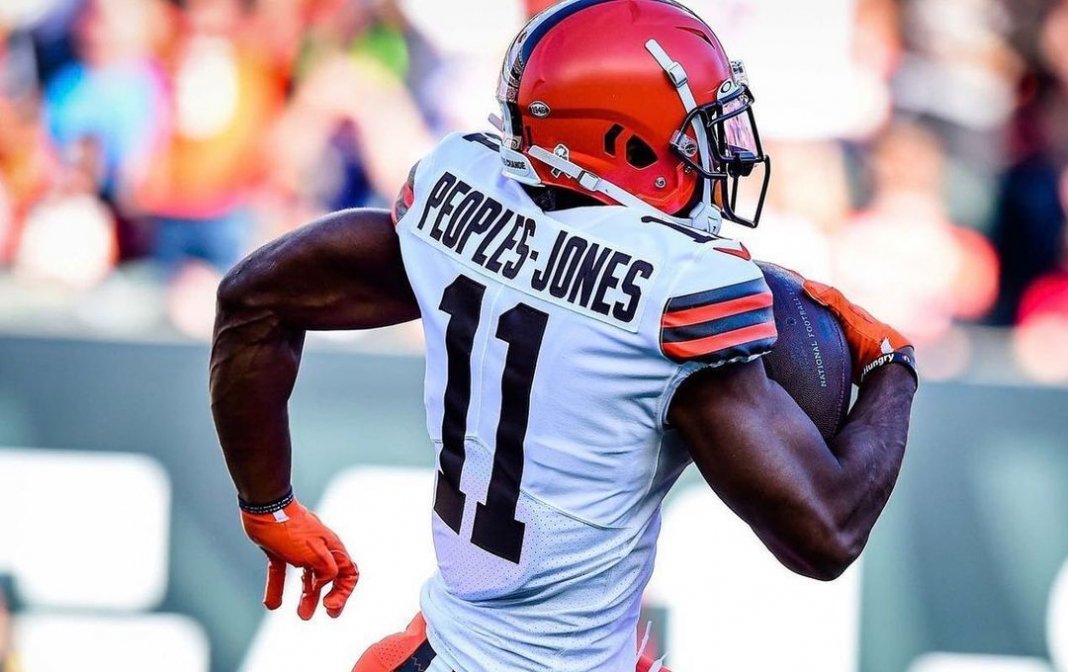 Suppose you meet 23-year-old Donovan Peoples-Jones, a handsome wide receiver for the Cleveland Browns. He will tell you he graduated from Detroit’s Cass Tech High School and played college football at The University of Michigan. He might not say that he reigned at the top of his class in academics and in football. It might come as a surprise when you encounter his humble and quiet persona, yet a powerful spirit surrounds him when you meet.

Perhaps, the secret aura or explanation is that he manifests his dreams toward achievement.

You see, Donovan Peoples-Jones has been tossing around a football since he was three years old. When he was five years old, he told his parents that he wanted to be an NFL player. And every day since then, he stayed focused on football and academics.

He started playing in the Pop Warner League in Southfield at age six, and he was outstanding. He excelled just as well while exploring basketball, soccer, baseball, and track, but his love for football was constant. It was football where he studied the plays and watched videos of old super bowl games at a young age to master the game.

“Donovan is a thinker and very insightful. He had a vision. He led me. However, I managed to provide positive encouragement from the very beginning and fed his dreams. Donovan has something special. He has the ‘It’ factor,” Roslyn Peoples, his mom, said.

For such a young man, you must wonder where Donovan’s character and convictions come from to be so disciplined. It might have come from the talks he enjoyed with his grandfather, John Peoples, Jr. — a quiet storm himself who gave so much to Detroit for nearly three decades as a theological leader, educator, and Councilman for the City of Detroit. Although Donovan may not be old enough to recall those days or the impact of his grandfather, he carries some of those same characteristics.

The discipline might have also come from Eddie Jones, Donovan’s father — a successful Chicago orthopedic surgeon. As a burgeoning athlete, Donovan spent some of his time with his dad practicing football drills and learning about his dad’s medical background, piquing a future interest in sports medicine.

Donovan was determined to prepare his mind and his body to achieve his goals and become a successful athlete. While setting his sights on professional football in high school and college, Donovan managed to win many awards and recognitions. Several honors, including The Rookie of the Year from Cass Tech and the University of Michigan. In addition, he won the 2017 Gatorade Player of the Year, 2016 Michigan High School Player of the Year, 2015 Nike SPARQ Championship, All American, and All City.

When I asked Donovan to tell me about the determination to make it at a top ten school and the NFL, he said, “It took determination, the desire to be the best and build a strong work ethic. But then, perfect practice allows me to make progress.”

Donovan also maintains an intense regimen that he follows along with his diet.

“I care what I put in my body. I try to eat clean and healthy for optimal performance,” he said.

Donovan’s workout regime is extensive. It includes a daily program consisting of a full body workout that focuses on legs, core, lifting, and cardio.

“Everybody in the NFL is good, fast, and strong … and I still choose to be better,” Donovan said.

As far as his football career, the best has yet to come. Donovan is heading into his third season, and sports analysts say he will likely receive an increased role in the Browns lineup. The Cleveland Brown got more than they ever expected when they drafted Donovan. “Mr. Dependable” is what his team coach now calls Donovan. In 2021, he had 34 catches for 597 yards and three touchdowns in his 14 appearances.

“Detroit is home and where my foundation will serve. I am committed to making a difference for the kids in our community. Each year, I will host a free youth football camp where campers will learn the importance of key life skills, Limitless pursuit of goals, and strong mental health,” Donovan said when asked what he wants people to know about him and hailing from Detroit.

This year, Donovan Peoples-Jones will hold his first youth camp at his alma mater, Cass Tech, on June 4, 2022 for grades 3–9. To register, visit the event’s registration page

Samantha White, Founder and Artistic Director of Shakespeare in Detroit