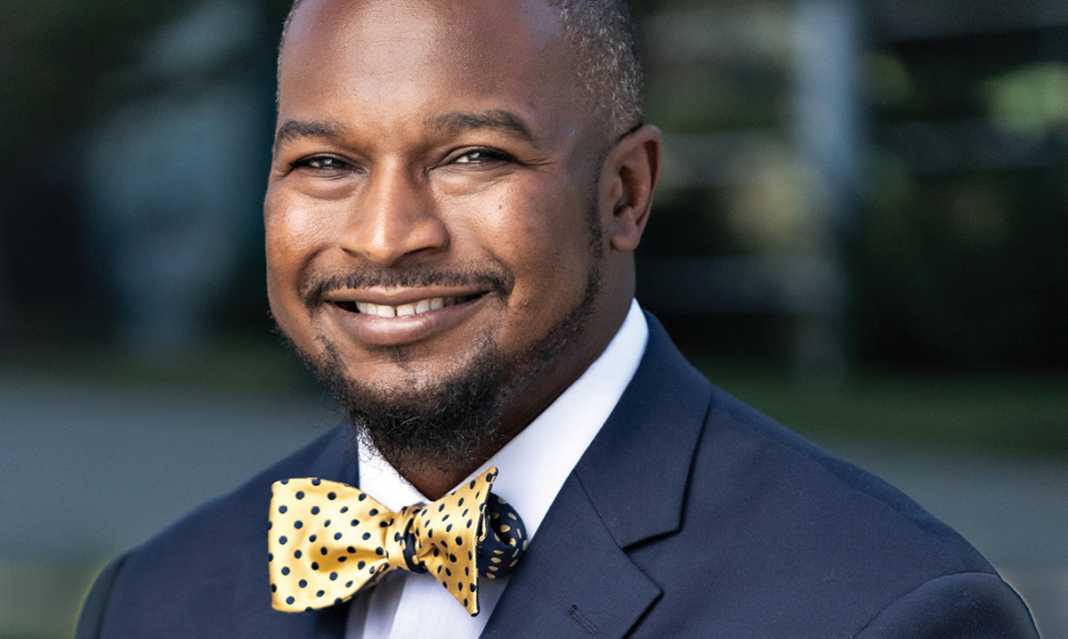 A year-long series featuring Detroiters who are driving positive change in their communities.

National Manager for the Men of Courage program Justin Kimpson is a father twice over, most recently to an adorable baby boy. He’s raising his family in a city where his village raised him, a strong foundation of cousins and uncles and fathers alike, so he understands better than almost anyone the hurt that comes from constantly seeing negative portrayals of Black men and Black families.

“I think it’s fitting I’m in this position. I started out as a teacher, because I felt like there was a need for more Black men teachers in our schools. Following that thread, it was kind of a natural progression when I started working for the city, and Ford after that. My life experiences as a whole have helped me to see different sides of life. Being a young man, a teacher, then a husband and father and mentor, I saw and experienced all these different elements of Black life. It prepared me for this role,” Kimpson says.

The Men of Courage program is developed and funded by Ford Fund, the philanthropic arm of Ford Motor Company. They started in Detroit in 2015, four years before Kimpson was chosen to be the national director, and quickly spread to other majority- Black cities like Baltimore, Atlanta and Chicago. With every one of their initiatives, events, drives and ventures, Men of Courage hopes to advance the narrative of Black men in ways the media often doesn’t, showing and supporting them as fathers, professionals, husbands, and generally complex human beings.

“Men of Courage is the final stage, the best way I’ve found to make sure Detroit has a national and global influence. Above all else, Men of Courage wants people to think of positive characteristics when they think of Black men, and we want Black men to think of themselves positively. That’s why we focus on the grassroots corners of the community where Black men really are, barbershops and the like,” Kimpson says.

Men of Courage is bringing their Barbershop Challenge to Detroit this fall, where local barbershops will compete for prizes and opportunities like grants of varying sizes, makeovers and upgrades, and free helpful information sessions in partnership with the Charles H. Wright. For this upcoming fall, Men of Courage will continue their partnership with the museum and pivot to celebrating Black men through the lens of visual and fine art.

Through this month all the way through early January, the Charles H. Wright will host the first Detroit showing of “Men of Change: Power, Triumph and Truth,” an art exhibition created by the Smithsonian Institution Traveling Exhibition Service (SITES), funded and made possible through the support of Ford Motor Company Fund and launched first in Cincinnati. According to Kimpson, the exhibition will feature famous and influential Black men that have changed the course of history such as Muhammad Ali, James Baldwin, Ta-Nehisi Coates, W.E.B. Du Bois and Kendrick Lamar, but also strives to highlight smaller, more intimate, less known people and moments that show men and families in a way that relates to all viewers.

“We have the entertainers, athletes and etcetera included as they should be, but that’s not all there is to Black men and their sons. We have a lot more potential and value to offer the world than just a jersey to cheer for. The beauty is that we can do that, and more, and excel at both,” Kimpson says.

The exhibition will include over 24 original works supported and surrounded by 132 interactive light boxes filled with literary and historic quotes, poetry, original works of art, dramatically back-lit photos and more. Twenty-five contemporary artists, native to the cities the exhibition visits, were invited to contribute their talents to honor the Black men in their lives who’ve inspired and uplifted them.

Kimpson says that in the wake of the George Floyd summer, Men of Courage’s art exhibition will be a refreshing change of tone and pace from a constant stream of injustice and frustration, and the image of Black men being debated and devalued for months.

“We so often see the pain and anguish of the Black experience in art and media. The community has been fighting that in recent times, and this is Men of Courage’s contribution to that effort. Our exhibition is a celebration of Black joy and power, and how dynamic we as a people can be,” Kimpson says.

For more information on Men of Courage and their initiatives, visit fgb.life/men-of-courage. For information on the
exhibit, visit www.thewright.org.

Soups to Warm You Up This Winter

Desiree Cooper: Why Movement is a Black Music Festival