Home People + Places Farrakhan: Jesus was hated by the same forces that have killed the...

Nation of Islam Minister Louis Farrakhan discussed Detroit, Christianity, Kwame Kilpatrick, and other political hot topics in a public address rallying Black Detroiters to buy back the city at Fellowship Chapel on Friday, May 17, 2013

he pews were packed with believers, supporters, and spectators from around the city and nation, as some arrived on Greyhound buses to hear Minister Louis Farrakhan's public address to Detroit on the second half of his visit to the city, where the Nation of Islam was founded.

"I know you love Jesus. I know that. But I don’t know if you know him as much as you love him. Because if we knew Jesus, really knew him, there would be no need for us to be arguing over who is managing the city," said Farrakhan, 80, addressing Detroit's leadership woes and future in its hour of "death."

"Jesus was hated by the same forces that have killed the city," continued Farrakhan, declaring Jesus, like Detroit, was hated "without a cause" and through deception by evil forces he referred to as "Satan."

Farrakhan shared his opinion on a range of topics while comparing "Satanic Jews," same-sex marriage, and fast-food restaurants to the workings of evil, as statements were met with "amen," standing ovations and silent compliance from an engaged audience."Wearing the cross does not make you a Christian," Farrakhan said. "It's not popular to be Christlike. It's popular to hold his name, and the world will bow to you because you support same-sex marriage."

Farrakhan also shared his plans to visit Kwame Kilpatrick on Saturday, May 18, in prison on corruption charges in Milan, Michigan, saying Kilpatrick was used to destroy Black people's faith in each other, while "White" politicians are guilty of the same crimes: "I know he didn't do everything right. Do you think White folks in office weren’t playing around a little on the side? …The enemy that charged him is a liar from the beginning."

After telling the Detroit City Council that Black Detroiters should buy land in the city on Thursday, Farrakhan supporters asked for donations from the audience on Farrakhan's behalf. Farrakhan later announced he would give the donated funds to Muhammad's Mosque Number One as part of a plan to invest in Detroit. Several people donated $1,000 for the cause.

U.S. Congressman John Conyers (D-13th MI) and Detroit Councilwomen JoAnn Watson and Brenda Jones were among those who attended the event.

"You know there is something special about Detroit … Now is the time that we need a word from the minister because there are some things happening in my city, your city, our city that shouldn't be happening, so we need a word … because we need some action from people who understand truth," Watson said, addressing the audience before Farrakhan's speech. 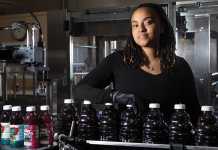