In the early 1930s, some of America’s greatest baseball players-Satchel Paige, “Cool Papa” Bell and Norman “Turkey” Stearnes-wowed the crowds at Hamtramck Stadium on the south side of the city. The stadium, located in Hamtramck’s Veterans Memorial Park, was the home field of the Detroit Stars, the area’s Negro League baseball team.

Click here to learn more about Hamtramck — an eclectic city within a city.

Hamtramck Stadium, built in 1930, is only one of “just a handful” of remaining Negro League-era baseball stadiums remaining in the country, says Greg Kowalski, chairman of the Hamtramck Historical Commission.

Although it’s not known exactly why the owner of the Detroit Stars decided to move the team to Hamtramck, historians surmise that it’s probably because of how close Hamtramck was to Detroit’s Paradise Valley neighborhood, which was a burgeoning Black community at the time.

The stadium was placed on the National Register of Historic Places just last year, on July 31. Although it hasn’t been used since the 1990s, it may get resurrected. Jason Friedmann, Hamtramck’s director of community and economic development, says a committee has been formed to raise funds for renovations.

Visit Hamtramckstadium.org to learn more about the history of Negro League baseball and Hamtramck Stadium. 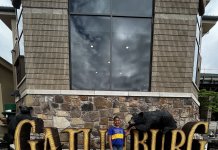