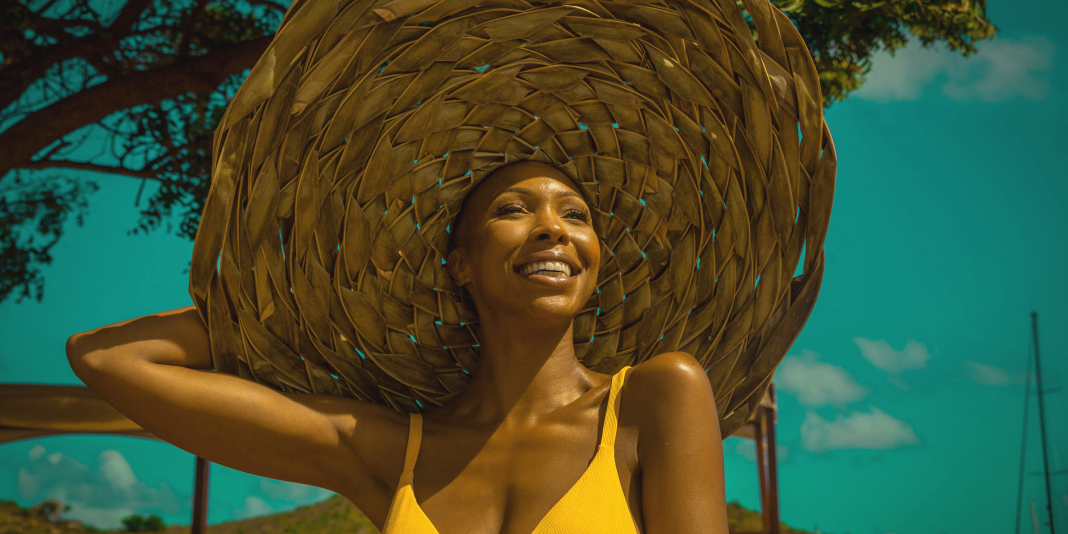 The expatriation of Black Americans from the U.S. is a trending topic these days. With the constant unjust and unrest occurring within the States, people — Black women specifically — are choosing to move abroad and create new experiences. Expat coach Amber C. Edwards is no different.

“My dad is from Antigua, Bermuda, but I was born in South Texas. I grew up very international. My goal as a child was to braid hair on the beach in Antigua. But of course growing up and traveling, I didn’t see as many Black people as I expected,” said Amber C. Edwards.

She’s now on a journey to help other black women experience overseas life with her 30 Day Blaxit Course — while living her own Blaxit life!

She moved to D.C. and met her husband. He was the first Black person she met who actually moved overseas and created a successful career out of it. At that point, she realized, “Wow! We actually can move and experience other cultures. Like, not just on vacation, but for a living.”

They got married, moved overseas, and began living in the Middle East together.

Amber C. Edwards: Before moving, I quickly found out that the U.S. was not the richest country in the world. I connected with a friend who has been living overseas for 10 years, while being Black. She gave me all the do’s and don’ts on living there without living in the Middle East. I also joined this Black Facebook group. It helped me through my moving journey because most of them lived in the Middle East as well.

I got some really good vibes! I saw many opportunities. While doing my research, I realized there are a lot of things missing from this place, one of them was Black hair stylists. I did sew-ins in college as a side hustle.

I also got discovered as a model in the Middle East. I was a one-in-a-million type of model at that time. No one there has ever seen a model who looked like me, and it worked very well in my favor.

When I wanted to start a business, I couldn’t get a residency because, technically, I was a tourist. It was exhausting!

I ended up moving from the Middle East to Antigua because my father is from there. I was able to get residency and became a dual citizen. I lived in Antigua for two years and ended up arranging vacations for work.

While doing that, I figured out I wanted to do something virtual so I would be able to move around and do different things. I became an influencer, and Antigua was my stomping ground when it came to social media.

Being a digital nomad was becoming popular. A girl reached out to me; I told her “Why don’t you come live with me in Antigua, I will show you the ropes, how to live here, and everything else you need to know!” This became the first The Local In Training (L.I.T.) House !

I created the course and launched it soon after. Since then, I have helped 23–25 black families move, travel, and create a better life for themselves around the world.

BLAC: Speaking of the house, who is The L.I.T. House for?

Amber C. Edwards: I have three types of women who stay at The L.I.T. House.

Staying at The L.I.T. House is a four-week process. “Single and Solo” is the vibe, so no age limits as of right now.

When they arrive, I pick them up from the airport, so they see a friendly face. We have a welcome dinner on the first night. During this time, we go over some simple house rules, show them around, and let the girls get to know each other. We throw a welcome party where I introduce the ladies to other Black nomads around the area.

I give them a script that I use which has helped me navigate conversations in Spanish; it’s just a little list of Spanish words and phrases. We have schedules planned out around their work, so that, while they are working, they can see new things, learn the language, learn the culture, etc.

BLAC: As a person coming to live overseas after being in America their whole life, what is the hardest part about adjusting?

Amber C. Edwards: It’s not being prepared enough to live overseas while being Black. When you go to a place, you look up everything you need to know on Google, but it doesn’t give you the complete picture of where you’re going.

I always say, “Proper preparation prevents poor performance.” Being around people who are doing the same things, who look like you, and think like you makes you more comfortable.

I always ask people, “What is something you can absolutely not live without?” That’s where we start. If that thing for you is not in a particular place, then you won’t last long.

I also try to figure out people’s goals, dreams and aspirations. “What do you want your life to be like living in this new place?” If a certain place doesn’t have it, that’s fine. We will find a place that does!

It’s all about your comfortability, what you can’t live without.

BLAC: How do you handle “homesick” nomad students or students that are second guessing their decisions?

Amber C. Edwards: I have a section of my course called “The Crew” where we focus on homesickness specifically because it can be scary for some people.

We set up certain things before you move, like calls with your friends and family. I always advise people to go south because time zones are similar down south to America than any place else. Go to places like the Carribean, Latin America, South America, because you will be in the same time zone.

Probably, 80% of my students are only coming for a month, so they have the option to stay in the country of their choice or go back to the U.S. Some of them have stayed longer or some of them shortened their trip.

I had a student leave her trip from Italy earlier than expected because she hated it, and that is completely OK!

We went back to the drawing board, and figured out that it was this particular city in Italy that she didn’t care for. We moved her to a different city in Italy, and it worked out so much better for her! It was all about the vibes and energy in the city for her, so we catered to that as much as we could.

It happens. Sometimes it doesn’t work and that is the beautiful thing about this program. You get homesick, you can always go back to the U.S. Make sure you always have insurance on your flight so if you want to go back, you can

BLAC: What’s one of your favorite cultural experiences you’ve encountered so far?

Amber C. Edwards: All of the cultures I have encountered have all been so different; it’s hard to pick a favorite.

I have used things I’ve learned from different cultures in my everyday life.

Qatar was the first place I actually lived, so it will always have a special place in my heart. I killed it out there, even when I did not expect to at all. I feel like that place taught me that, whatever I do, it has to be global, or it should be able to move with me.

Antigua is like home to me, with most of my family being there and growing up there. The place drove me to create my first L.I.T. House. Since I already had roots there, it made me want to lay down more roots there.

Mexico will always have a special place in my heart because I was born right on the border. I was raised by a Mexican family. In fact, I know more about Mexican culture than Black culture.

All of these cultures are very special to me. It is radical as a Black American to travel and expand your mind during times like this. My passion is for every Black person in America to have a passport and travel the world.