She's the only black skater in the Detroit Roller Derby and she's in it for the action and the "sense of sisterhood," and hoping for more inclusivity. 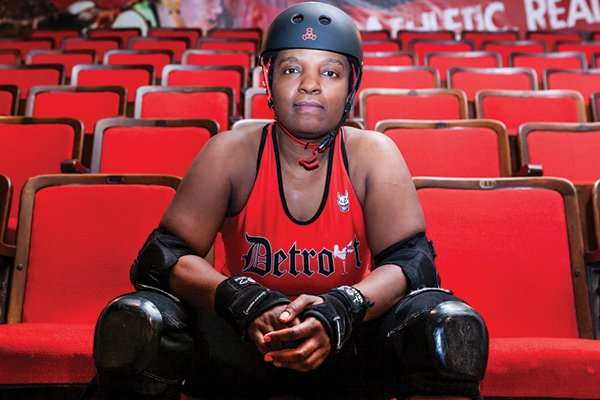 The tough-as-nails women of Detroit Roller Derby spend half the year in roller skates. They’re running drills in practice, strengthening their legs and footwork and playing rough, no-holds-barred games – while binding an unshakable sisterhood. Clinton Township native Michelle Thomas, aka Swift Justice (#10), represents as the only African-American player in the league, skating for D-Funk Allstars.

“It was in 2009 when I came to my first game. I was just blown away,” she says. “I can remember one player named Muffy Mafioso” – a featured skater in Drew Barrymore’s 2009 film Whip It – “who just kept taking hit after hit and she just kept going. The energy of the crowd and the cheering was amazing.” Thomas enrolled in “Derby U,” a rigorous series of skills tests, a 12-week boot camp and other assessments until she was finally eligible to be drafted.

Detroit Roller Derby was founded in 2005 (then called Detroit Roller Girls); they’ve got four home teams, three travel teams and a junior league. The current season began in February and runs through June, with most of the action happening at The Masonic Temple. Thomas’ first game of the season is April 6. Each game is comprised of two 30-minute halves, which are a collection of two-minute jams.

At the beginning of each jam, four skaters from each team line up to create the pack – these are the team blockers – the lead blockers are called pivots, distinguished by the stripe on their helmets. The jammers – stars instead of stripes – line up 30 feet behind the blockers. Only the jammer can score. “What I really love about this sport is that it’s a full-on contact sport. The blockers have to play offense and defense. We have to get the jammer to score while keeping the other team away from their score. It’s crazy chaos and I love it!”

Unlike most other professional sports, the athletic women of Detroit Roller Derby don’t get paid salaries or offered lucrative sponsorship deals. They commit to practicing three times a week, competing in out-of-town games and mentoring players in the junior league. “Most of my teammates are students, moms or just regular 9-to-5 workers, but we are a family. The sense of sisterhood and the relationships that I’ve formed from being a part of this team has been nothing short of amazing,” says Thomas. “These ladies are like my second family.”

Being the only African-American isn’t unfamiliar territory for Thomas. She grew up in Clinton Township, attended an all-white high school, lived in all-white neighborhood and went to the University of Michigan, which is currently 65 percent white and only 5 percent black. While the Detroit Roller Derby is diverse in some aspects – for instance they have many LGBTQ skaters – they’re not exactly all-inclusive.

“Most of our skaters do not live in Detroit but rather (are) from surrounding areas like Ferndale, Royal Oak and Downriver,” says Detroit Pistoffs and Detroit Roller Derby All Stars manager Bridget Burke, aka Oi! Rish (#14). “We do not tend to go out and recruit ourselves, but normally, interested skaters come to us after seeing us either in a game or on Facebook, and word of mouth is also a big factor. We spend hours and hours a week practicing in Detroit at the wonderful Masonic Temple, but we are not out interacting with the communities of Detroit. I also believe that women’s sports aren’t taken as seriously so people don’t understand what we are really doing.”

Women’s roller derby has become more popular within the last decade with the release of Whip It! and the documentary Hell on Wheels, but it’s still very rare to see black women on skates. Thomas says, “The black community hasn’t been exposed to the sport because it’s still a fairly new sport. I’m the only black adult in the league, but the junior league has five young ladies that are getting trained to represent in the coming seasons. Things are starting to change.”

A Race Based View on Money Management