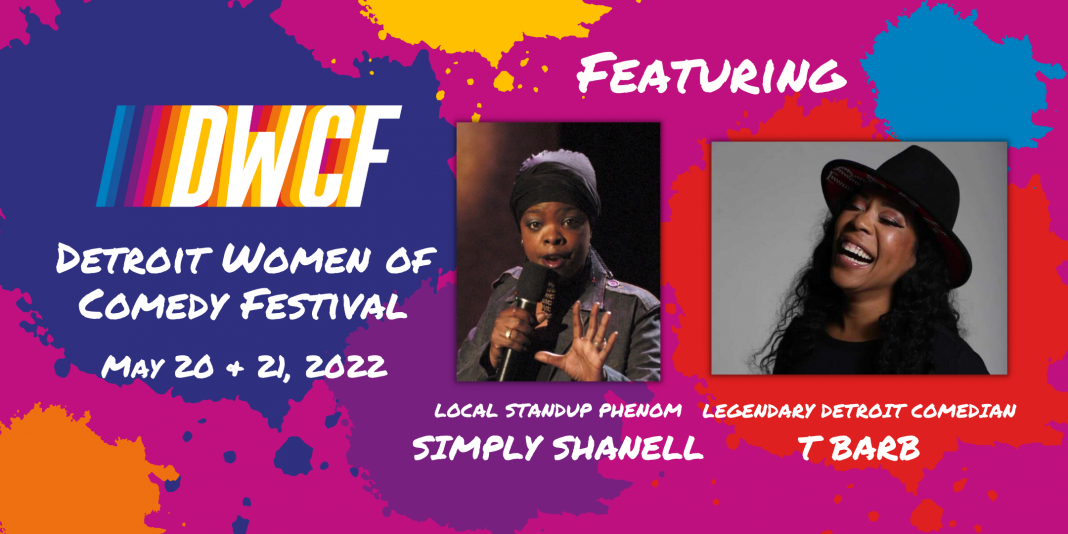 Like you, we’re excited to laugh with the brightest comedians at Detroit Women of Comedy starts tomorrow. To warm up our bellies for the two-day nonstop laughs, we met with two of the event’s headline acts: Simply Shanell and T Barb.

Just before they get on stage this May 20 and 21, 2022 at Planet Ant Theatre and Independent Comedy Club, these hilarious ladies gave us a glimpse of their beginnings, what it’s like to be a Black woman in entertainment, and what you can expect at the festival.

BLAC: Tell us a bit about yourselves and where did you come from?

And I came from my parents, Robert and Vernell.

T Barb: My name is Tiffany Barber, and that’s how I came up with T Barb.

BLAC: How did you get your start in comedy?

Shanell: I worked in juvenile detention for years. I got upset one day at work.

Driving home, a commercial came on the radio: “Are you funny? Do people say you’re funny? Well, come on down to All Jokes Aside.” It was an open mic night and I drove straight there at 3:15 in the afternoon.

Later in my career, I was given the opportunity to go to Germany and entertain the troops. My employer, then, didn’t give me the time off even though I had a lot of unused vacation and personal time. And I just said, “You know what? Jesus! I’m out.”

T Barb: I was a social worker with the state of Michigan, but was just very goofy. One of my coworkers thought it would be a good idea for me to go to an open mic at a place called Macabees, now Shield’s Pizza.

A post shared by Detroit Women of Comedy Fest (@detroitwomenofcomedyfest)

BLAC: Shanell, at 35, you said I’m going to just do this new thing. What was your mindset at that moment?

Shanell: I didn’t even think that I was starting a new thing. People always said that I was funny for years. I just never really pursued it. It was just me wanting to release that day. The first couple of years doing comedy was strictly therapy. It wasn’t about, “Hey, this is what I’m gonna do for a living.”

I found out that, on my worst days, I could get on stage and talk about it, and people found it funny.

BLAC: How does it feel to know that something you started as therapy has taken you to places?

Shanell: Shortly after I start seeing a therapist, one of the prescriptions he wrote was “Much comedy.” It put me in the center of my reality, because that’s all I talked about. On stage, if you were a supervisor, I hated you. If you were a department manager, you were a spawn of Satan. I was dealing with the dynamics of a workplace.

Comedy has given me the opportunity to travel to places I never even thought about traveling to. I wouldn’t have done that in my old career. I went to Germany, Korea, and Japan. I went to Aspen for a week in February. I love this, and I am the best boss I’ve ever had.

BLAC: Have you ever had a moment where you left the stage and felt, “I did not do good”? How did you handle that?

T Barb: I think all comedians have bombed. Personally, I think you’re probably not a good comedian until you bomb because you are going to learn something in that experience that you won’t learn if it goes well every time.

A post shared by Detroit Women of Comedy Fest (@detroitwomenofcomedyfest)

BLAC: What are some of the challenges being a woman in comedy?

You have to understand that you’re going to go places where you may not feel as safe, just because you’re a woman and you’re a Black woman. Sometimes, you don’t know where you’re going. People book you; they’ll give you an address. They’ll tell you a number. You’ll be pulling up to a barn and you’ll be like, “Hold on. I thought this was a club.”

Even using the bathroom is a challenge. You may have to relieve yourself at a park that has no accommodations for you as a woman.

You’ll even have male promoters who will book you based on whether they feel like they can sleep with you. I have places that I do not get booked because I would not date or talk to the promoter. We have this perception that we’re past a lot of things that we don’t acknowledge. These things are still happening.

Shanell: Comedy is male dominated in all levels. They think women can only talk about certain subjects.

Even with the pandemic, a lot of women were like, “Hey, you know what? I’m going to invest in me. If one is not an avenue open for me to be creative in the way that I want be creative, I will make my own avenue.”

I’m loving that the women are making a lane for themselves.

BLAC: Tell us about the Detroit Women of Comedy Festival.

The Detroit Women of Comedy Festival last year was virtual. This year, we’re excited to have it live.

This festival is important to women, to the culture, to the area, and to comedy. It will showcase a lot of diversity, and it gives Detroit a chance to shine in comedy, and women a chance to shine. It lets part of the population that doesn’t have as many opportunities, the ability to shine.

Shanell: What I like about the festival is they’re recognizing our own. You can go to festivals everywhere, but this one is for the women of comedy. You don’t have too many festivals that really focus on us. Plus, it’s in our hometown.

I looked up the charities that the festival is helping this year. I was really, really, really happy to see that it’s helping victims of domestic violence, sexual assault, and children’s charity, too.

BLAC: Is there anything else that you want our readers to know about?

T Barb: You don’t have to stay where you start. I came from humble beginnings. My parents met fresh out of prison, so a lot of people never had high expectations for my life. I went to college by myself.

Nothing is unattainable. No matter how deep in the hole you start, you can always be in the sky if that’s where you want to be.

Shanell: I want to always be able to live life. I love the level that I’m at right now. If my life today didn’t change any better or any worse, I could live the rest of my life contented.

BLAC: Did it happen so far?

Shanell: I’ve been to Alaska.

SEEN: Celebrating a Centennial of Fashion