Dedicated to diversity and bridging the gap between communities, Shakespeare in Detroit produces shows around metro Detroit—and reminds us of the importance of art.

During the 2014 polar vortex, Samantha White held four performances of Shakespeare’s Antony and Cleopatra in an unheated recycling warehouse in Detroit. The audience, which was seated on a mix of wooden benches and large mounds of recycled paper, totaled nearly 800 over the entire run.

“Most of the audience was women. Half were people of color. That’s crazy for classical theater,” White says. “With the conditions like the ones we were in, where it was below freezing, for them to stay the entire time, I thought, ‘Wow, I’m doing the right thing.'”

As founder and artistic director, White chooses the plays, venues and works directly with the actors when preparing for shows. Introducing new audiences to Shakespeare is what keeps White going. Right now, Detroit has a lot of social and economic movements happening. But to White, it isn’t about movements, but rather, not moving at all.

“It was about a commitment to my city and using what you have to help grow the city,” White says. “I’m using what I have, and what I have is Shakespeare.”

White is a Detroit native who grew up on Seven Mile with a mom who stressed the importance of literature and the arts at an early age. When White was 8 years old, her mother gave her a copy of Shakespeare’s complete works.

“We read everything from James Baldwin to Alice Walker to Shakespeare,” White says. “I appreciate her now because if she hadn’t given me that book, I wouldn’t have Shakespeare in Detroit now.”

People-from Northwest Detroit kids to West Bloomfield moms-come from across the metro Detroit area to see her shows. White takes pride in the diversity of her audiences: communities that might not otherwise have the opportunity to sit in the same room.

“For kids who are from places like mine, if they see me-they really can do anything. I think that if a little girl from Seven Mile can start a Shakespeare company, then anybody can probably do anything.

With all the success Shakespeare in Detroit has had, White says she still faces challenges because of who she is and what she looks like.

“Sometimes when people meet me, especially because my name is Sam White, they don’t expect me to show up. And I think the first thing they see is what I look like, so I think that takes them aback sometimes.”

Raising money for the shows was difficult for White in the beginning. She says some people have a hard time wrapping their minds around the idea of Shakespeare in Detroit. And most investors were looking to put their money into industries like tech, retail and restaurants.

“I just think that the arts got left out of the context of that,” White says. “We forgot about art and how much it matters to the city.”

See the Actors in Action

Shakespeare in Detroit opens its third season with a production of Julius Caesar, which will be held at Wayne County Community College District’s Heinz C. Prechter Educational and Performing Arts Center in Taylor. Performances are 7:30 p.m. Friday March 4 and 3 p.m. Saturday, March 5. Tickets are $20. A week after the troupe closes its two-night run, it plans to do a surprise comedy pop-up performance somewhere actually in Detroit. Learn more at ShakespeareinDetroit.com and buy tickets at ShakespeareinDetroit.brownpapertickets.com. 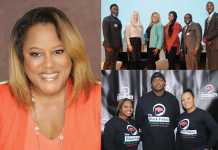