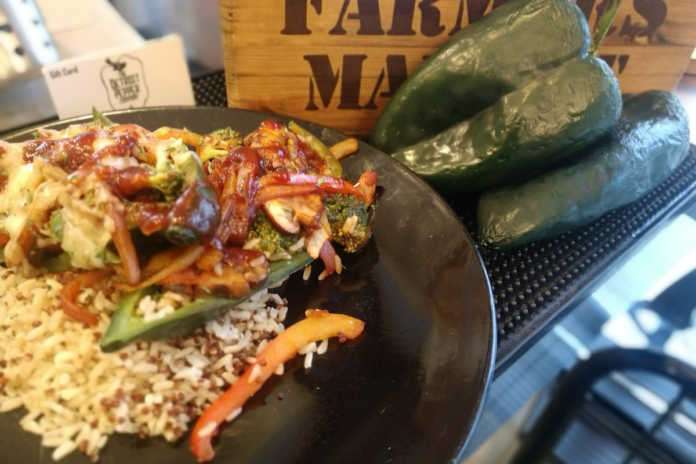 For Marlin Hughes, two watershed moments motivated him to make changes that led him to open a restaurant. When his son Noel, now 21 years old, was diagnosed with autism at 2, Hughes switched him to a gluten- and dairy-free diet to help his condition.

Then, Hughes’ father died from lung cancer 12 years ago. Hughes took stock of his life – because he smoked, drank alcohol and was overweight. “My life changed. My dad died, and I walked away from where I was,” Hughes says.

The clincher for Hughes was a milestone birthday party he threw for his wife Kita in 2011. He made stuffed peppers, the hit of the party. Hughes prophetically told his wife, “One of these days, we’re going to sell these peppers.”

Hughes and Kita purchased a building in the East English Village and, after spending a couple years getting it together and landing a $45,000 Motor City Match award in 2017, The Detroit Pepper Company was born in 2019.

The carryout-only eatery features stuffed bell peppers (including a vegan option), salads, soups, grain bowls, fresh smoothies and more. “All the ingredients are made from scratch. It’s not a prepackaged process – it’s all made with love,” says Chef Hughes.

After appearing on WDIV TV’s Tasty Tuesday segment in December, the restaurant saw a barrage of customers eager to see what all the fuss what about. “We were ready, but we still sold out. The door never stopped opening.”