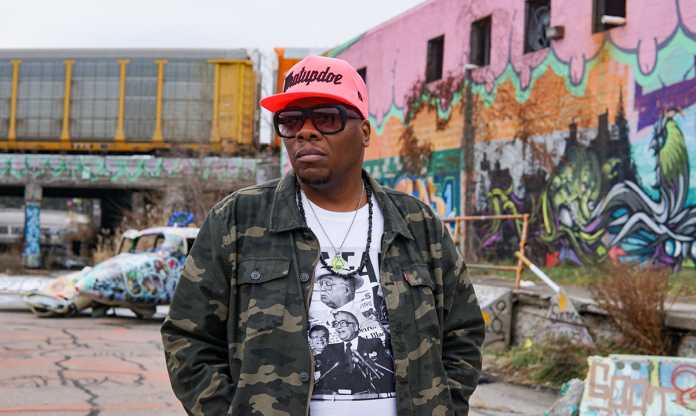 The Filthy Americans Arts & Cultural Preservation Center is an ode to Detroit, techno music, skateboarding, streetwear and community building. Located in the Holden Block Redevelopment and Lincoln Street Art District in Northwest Detroit, the owners, Grammy-nominated producer and entrepreneur Electrifyin’ Filthy Rockwell and William “BJ” Smith, are dedicated to inspiring the next wave of Detroit artists.

“Here in Detroit, we create a lot of the culture, but we give it away to others,” Rockwell says. “Growing up, I didn’t have a mentor in music – it was just something I took to.” Even after decades in the music industry, Rockwell never left Detroit. He says, “I get a certain vibe from Detroit I can’t get nowhere else. My music sounds like this because of Detroit.”

Rockwell trademarked the classic Detroit salute “what up doe” and began hosting pop-ups at the Detroit Shipping Company. After a year, he realized he needed a space of his own, and that’s when entrepreneur Adrian Tonon came to him and told him about the historic and then empty Lincoln assembly plant on Holden Street. Rockwell says, “At the time, all that was in here was a dirt floor and brick walls.” But Rockwell could see the vision.

The center is for skaters, artists, creators, freethinkers and people who want to make it in the creative industry, independently. The team plans to open up the cultural center for free workshops, mentorship programs, concerts, art shows and more.

The Filthy Americans brand of streetwear is also displayed throughout the space. The first collection featured a nod to Detroit’s first Black mayor, Coleman A. Young. Dedicated to the growth of Holden Street, Rockwell has adopted the skate park next door in hopes of creating a safe space for the community.