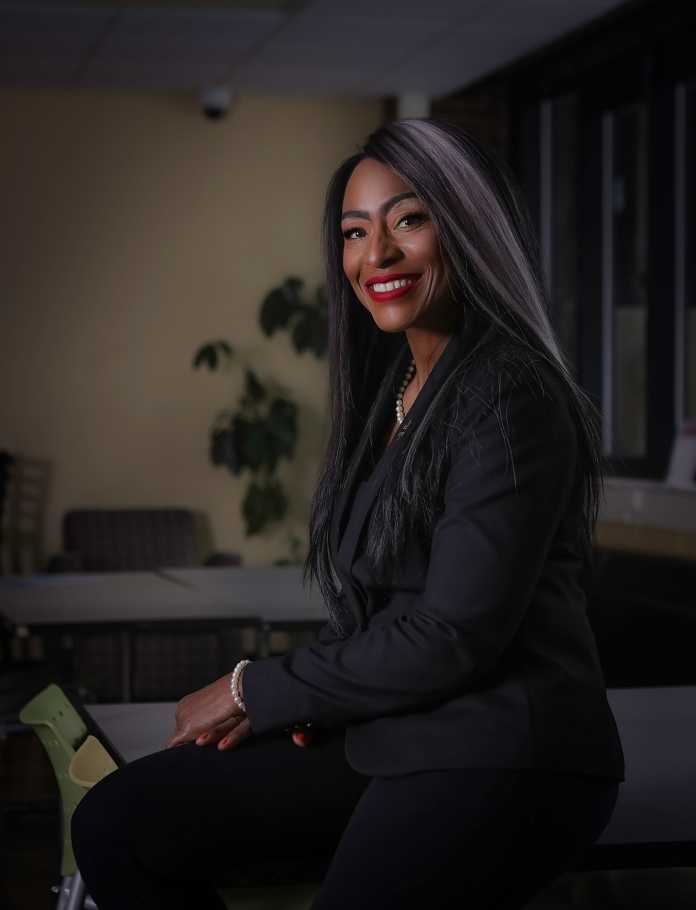 Nothing has come easy for this Detroit native and single mother of three. Her determination, positive attitude and talent are just a few of the reasons she thrives and is able to balance a host of responsibilities that would topple others.

On track to complete her Associate in Arts degree this summer and then a General Business degree, Qualls has been accepted to Wayne State University. This fall, she will be a dual-enrollment student at WSU and Schoolcraft College with a major in Social Work/Sociology and a minor in Business Communication.

In addition to her studies, Qualls is a leader with several Schoolcraft College student groups. She is president of the Schoolcraft Business Club and Student Activities Office liaison/mentor to multiple clubs, including the Black Student Union, Phi Theta Kappa Honor Society, Amnesty International, Safe Place, Christian Challenge and the Native American Club.

“I’m extremely passionate about working with marginalized populations and have made it one of my life’s endeavors to not only serve, but advocate, for those unable to do so for themselves,” Qualls said. “Growing up in a multiracial family as a minority, I personally know the detriment caused by lack of resources, especially in and among high-minority-populated areas.”

Food insecurity has been an important cause for Qualls, one that her oldest daughter, Arabella, shares. The two formed a small-business partnership, Poor Man Bread Co., to help in several ways.

“The mission is to increase knowledge, promote growth within the local economy, provide gainful employment through these locally baked goods, assorted handmade items and artwork from local artists, including my daughters,” Qualls said. “All of this happens while pooling within a diverse, inclusive, fair and equitable work environment. After starting in a pop-up format, we hope to have a brick-and-mortar location.”

Giving back as a mentor

Qualls readily shares her business acumen with her fellow students, with emphasis on a growth mindset and results in an ever-changing business environment.

“We can no longer exist with a ‘Business as usual’ mindset,” she said. “We must dare ourselves to continuously evolve and pivot according to any given situation. During this unprecedented time in our history, continued innovation and a growth mindset will ultimately yield successful results each and every time. We were created to adapt, and that is what we must continue to do.”

This advice and perspective was hard-earned by Qualls. A licensed cosmetologist, Qualls was the sole proprietor of Salon Astoria on the city’s northwest side for a little over 10 years. Even in the best of circumstances, running a business is a huge challenge. For Qualls, it was even more difficult.

“As owner of Salon Astoria, I faced many challenges as a woman of color,” she said. “It was extremely evident that being a minority female business owner was not an optimal situation, especially whenever I needed to transact banking, make supply transactions, or simply gain information that was readily made available to friends of mine in the industry who weren’t minorities.

“Unfortunately I faced these challenges among all races, including African American, just to a lesser extent.

“I had to outwork, outthink, and out-create continuously to receive even half the credit. Resources were never available when I inquired; therefore, I consistently had to create ways to generate the extra resources I needed to not only sustain but maintain a profitable business, which I was able to do, as a result of a dedicated clientele, family, and above all God giving me the strength, fortitude and wisdom to operate amidst great adversity.”

Qualls’ commitment to servant leadership at Mosaic Midtown Ministries as a member of the Women’s Ministry Team led to the invitation to embark upon a missions trip to Jamaica. While there, leaders of Mosaic Midtown, under the tutelage of Pastor Mick Veach, and members of the team helped complete restoration work and do Outreach Ministries in the shanty towns of St. Ann, Halifax and Negril.

Determination and making a difference

“Never take no for an answer,” she said. “Always research further if you’re not getting the results you’re seeking, and if anyone is trying to impede your success, ask yourself why? Don’t give up and never back down. What is for you can’t be taken by anyone else – and vice versa. Challenge yourself daily to be better than you were the day before.”

The other theme is getting involved to make a difference.

“Schoolcraft Student Activities is an integral part of student campus life, whether conducted virtually or on campus,” she said. “My involvement in student clubs across campus has led to success both in and out of the classroom.

“Social skills, empathy and emotional intelligence serve not only as building blocks to effective communication, but they are also a hallmark of an observantly progressive society.”