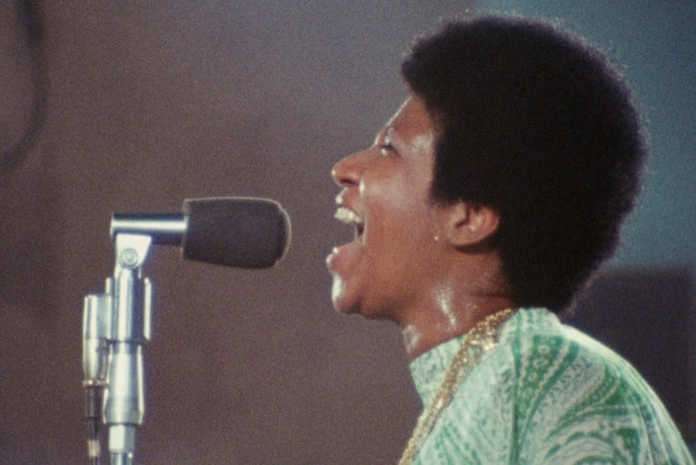 Press, notable Detroiters, and friends and family of Aretha Franklin were beckoned to the Detroit Film Theatre on Monday, March 25 to prescreen Amazing Grace ahead of its April 5 release.

The film is two hours of never-been-released footage of Aretha Franklin live recording songs for her gospel album by the same name, which would go on to win a Grammy in ’73, go double platinum and become etched in history as one of the best – if not the best – gospel albums of all time.

The Queen of Soul recorded at New Bethel Baptist Church in Los Angeles in ’72, with the help of the Southern California Community Choir. Rev. James Cleveland led the performance, or more appropriate probably, the service.

Over two nights, in front of a live audience of folk from the community, she sang greats like “Wholy Holy,” “What a Friend We Have in Jesus” and, of course, “Amazing Grace.”

Franklin’s rendition of this last one did everyone in, including the choir. They went from performers to awestruck observers, several singers brought to tears – along with Rev. Cleveland – and all on their feet, shouting and praising.

At one point, someone threw a handkerchief at The Queen. So, you know this means she was SAAAAAANGIIIIIIN’! The energy poured from the screen and whirled around the DIA auditorium.

“The film is really about spreading Aretha’s legacy. This is 1972, Aretha at the age of 29, and I think it shows her at the peak of her power,” says film co-producer Tirrell Whittley. “It’s something to be a superstar, but then a superstar that decides, ‘Hey, I’m going to go to a church, in Watts, California, lay down one of the best gospel live recordings ever and really just blow you all away,’ so much that Mick Jagger shows up.”

The Rolling Stones frontman can be seen grooving with everyone else on the second night.

Amazing Grace opens in New York and Los Angeles on April 5 and releases everywhere April 19, Easter weekend. Just to be a passive viewer was nearly overwhelming; it was truly a special and electrifying experience. Prepare to be taken to church.

Shots from the red carpet:

Open, Relaxed and Free After a BlacThai Massage