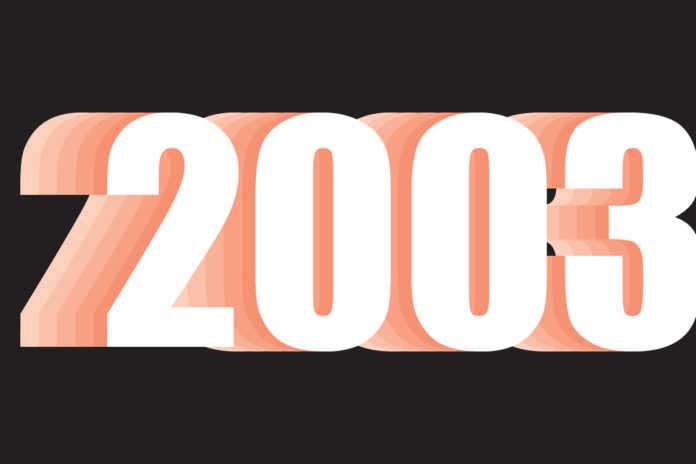 Flipping through the pages of BLAC circa 2003 (then called African American Family) truly feels like a trip down memory lane. There’s Kwame and his family, so young and full of promise, on the cover of the April issue, Dennis and Trudy Archer looking picture-perfect, as always, as they talked about their post-mayoral life in the November issue.

And La-Van Hawkins, the kingpin of Detroit restaurants back in the day, reveled in the recent opening of his fine dining sensation, Sweet Georgia Brown, before all of his legal troubles. La-Van died earlier this year. Kwame is still in jail. And the Archers? Well, thank God for them. Start your own throwback trippin’ right here. We promise, it’s not all bleak.

Early advertiser Standard Federal Bank has had more name changes than Prince and Sean Combs in the past 15-plus years, but these things featured in BLAC back in 2003 are still relevant today:

Beyonce’s “Crazy In Love” spent eight weeks at No. 1 on the Billboard Hot 100

Deliver Us from Eva was a date-night must

At Home with the Kilpatricks

In 2003, Detroit’s first family finally moved into the Manoogian mansion after a $250,000 remodel that made the 5,000-square-foot residence more kid-friendly for their boys, twins Jelani and Jalili and 16-month-old Jonas. The Kilpatricks opened their home to BLAC for an interview and tour. Here are some highlights:

Carlita on the renovations

“I was able to express myself with things that I really liked and felt the children would enjoy. We had to talk to a lot of people who treated fabric to find out what would wear better or clean better if something spilled.”

On running for mayor at such a young age

“It took audacity, didn’t it? We were sitting around, a group of 10 people, and we were putting stuff out that we thought the next mayor should have. I gave my two cents, they looked at me and said I should run. I denied it for about a month. But (Carlita and I) prayed about it, went on a trip and talked. And I decided to run.”

On why the mayor skipped church and hobbies

“All my spare time I spend with (my kids). That’s why I don’t golf, hang out at bars. I don’t see how guys with families can do that. When (the kids) get older, maybe. But they’ll tell me, ‘Dad, you’re working too much. We want you to stay home.’”

Wherever we were, whatever we were doing, we all remember the Northeast Blackout on Aug. 14, 2003. It was the second largest blackout in U.S. history, affecting 50 million people in the Northeast and southern Canada (including 2.3 million households and businesses in southeast Michigan). Some got their power back within a day. But many of us went without for days or even a week.

Some people fled the city and held their breath in long gas lines on their way to places with power. Others hunkered down and sweated during the scorching temps. But we were all relieved when the power came back on. The fears of major power outages in 2000 were unfounded, but a little software bug at an Ohio-based energy plant taught us that life can come to a screeching halt without any warning.

In a landmark case on June 23, the Supreme Court weighed in on affirmative action in higher education for the first time in 25 years. The 5-4 verdict upheld the right of the University of Michigan’s law school affirmative action policy; the Court said it had a “compelling interest in favoring underrepresented minority groups.” Get Your Money Ready for Business

Spicing Up the Season with Singer Elijah Connor